Aisha Abu Awwad, 57, sat in front of a demolished tent that once constituted her family’s home in the Palestinian community of Humsa al-Fawqa.

With practically no shelter from the winter weather, she held tightly to her youngest granddaughter, three-month-old Manar, who is also the youngest newborn in the community.

As the cold wind intensified and storms approached, the pair could do nothing but wait for a new tent to be erected.

On 1 February, the Israeli army demolished and confiscated a number of homes and tents in the Bedouin community, which lies in the occupied West Bank’s northern Jordan Valley.

The army completed the demolition process on 3 February following a period of three days in which they demolished 70 shelters and tents, some of which were homes and some used for livestock, which locals depend on as their main  livelihood.

Eleven Palestinian families, consisting of close to 80 individuals including more than 40 children, were displaced, and they no longer have a home or safe shelter this winter.

It is not the first time the army has demolished Humsa al-Fawqa.

The entire community was knocked down as recently as November 2020. The residents rejected the army’s attempts to forcibly deport them, and rebuilt their homes.

The army also regularly raids the area under the pretext of military exercises and temporarily displaces the residents for several days.

So far, the families have been evacuated 11 times.

‘Between the ground and the sky’

Aisha, who moves around with difficulty, suffers from back pain that intensifies in the cold.

“The community has become rubble. The Israeli army came and destroyed all of our homes and tents,” Aisha told Middle East Eye. “We are now in the open, between the ground and the sky.”

She is a mother to four children and eight grandchildren. The eldest of the newest generation, Ameed, has not yet turned six, while the youngest are Manar and seven-month-old Hadeel.

Running around their demolished homes, children played and tried to collect their toys from underneath the wreckage. Aisha observed them intently, and called on them every once in a while to check that they are okay.

‘The community has become rubble. The Israeli army came and destroyed all of our homes and tents’

“I fear greatly for these children; we are unable to provide them with safety today, or even the ability to protect them from the cold,” she said

Thunder began to light up the sky over the demolished community. Minutes later the wind intensified and the first rain drops began to fall.

The children continued to play, unaware of the difficult night that lay ahead for themselves and their families.

Amal Abu al-Kabbash, 25, paced round to collect some blankets and hide them under the destroyed tent.

“They are trying to make life difficult for us and to surround us from all sides. Life here has become almost impossible. Despite all that, we continue to remain here,” he told MEE.

“There is no longer a tent to protect us from the cold, and to bring us together. Since the demolition, the Israeli army has set up roadblocks in the vicinity of Humsa al-Fawqa, preventing water tanks and tents from reaching us, and confiscating the belongings we tried to bring in.”

He said that Israel intended to make Humsal-Fawqa, which extends over 60,000 dunums (60 square kilometres), an area completely empty of Palestinian residents, in order to build settlements on it.

On 4 February, a Palestinian Authority delegation, headed by Palestinian Prime Minister Mohammad Shtayyeh, and a number of European diplomats and international human rights institutions visited to Humsa al-Fawqa, as a form of solidarity.

A group of Israeli army and intelligence vehicles closely monitored the event. A military checkpoint was set up at the entrance to the community, and all vehicles entering the area were subjected to searches.

“Our hope is that this solidarity will be real and will not end today, and that it will turn into an act that supports our presence here, not just a show before the media’s cameras,” said  Abu Awad. 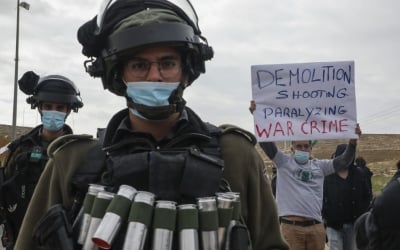 He pointed out that the community’s location in a remote and marginalised area meant that the army could carry out its policies against them quietly.

“The presence of others around us protects us and draws attention to what is happening to us here, and we hope that this will be a deterrent to the Israeli army and expose its actions to the world,” he said.

“Everyone will leave, and we will remain alone facing this reality each day and fighting it alone,” she said.

Murad Ishtewi, head of the Wall and Settlement Resistance Committee office in the northern West Bank, told MEE that the Israeli army had demolished several tents that were rebuilt by a group of activists who have been present with the community since 1 February for support.

The army also confiscated nine vehicles belonging to activists and residents as a way to deter them. Ishtewi emphasised that the continuous demolition of Humsa al-Fawqa was not merely a punitive act that the Israeli army had only just carried out, but rather a process of forcible displacement that seeks to empty the area of the Palestinians.

“Today, the Israeli army is targeting Humsa al-Fawqa, but this will policy will also affect the rest of the Palestinian villages and communities in the Jordan Valley, as Israel seeks to annex the area, which constitutes a third of the West Bank, and includes its most fertile lands.”

2021-02-06
Previous Post: The Undead Myth of Sex Trafficking At The Super Bowl
Next Post: The City of Lacey’s Response To Homelessness Is a Multi-Step Approach