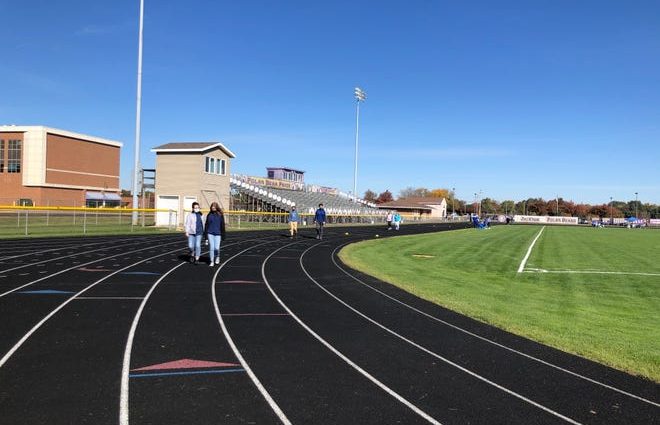 JACKSON TWP.  Five Jackson High School seniors want people in their community to be on the lookout for the signs that people who live among us are being forced into a life of prostitution.

Their efforts as part of their senior project for the Jackson Academy for Global Studies culminated in the organization of a fundraiser and one-mile walk over three hours Saturday on the track of Jackson High School’s Netz Stadium.

Students sold donated Chick-fil-A sandwiches for $3, bottled water for $2 and chips for $1, with the proceeds they said going to Rahab Ministries. The charity based in Fairlawn says it’s a Christian organization that provides shelter, refuge, outreach and mentorship to help people escape sex trafficking and prostitution.

In an email after the event, organizer and Jackson High School senior Makenzie Morgan wrote the event raised $1,300 and attendees donated about 1,000 items, many of them toiletries for victims of trafficking. She added that local Chick-fil-A franchise owner Doug Pugh donated 75 sandwiches, all which were sold.

The other four organizers are also Jackson High School seniors who are students for the Jackson Academy for Global Studies, often referred to as JAGS. Aly Stanislawski, made the announcements at the event with Morgan. The three others were competing at a cross country meet, said JAGS Service Coordinator Kathryn Stone. They are Ariel Torgler, Samantha Stuhlmiller and Alivia Lutz.

Stone said, “So the idea is that our kids are going to learn a little more about (trafficking), bring attention (to it from) the community about it. Raise funds, raise materials to help kids, and women and men who have been trafficked in our area.”

Morgan, in a phone interview before the event with Stanislawski, said she and the other organizers started planning the event about a month ago after a similar annual event at Walsh University was canceled due to the pandemic.

“It’s a lot of work. We’ve been pretty stressed about it,” said Morgan. “We just want to spread awareness to everyone that we can.”

Stanislawski said much of what traffickers do to lure vulnerable people, many of them teen girls and boys, into forced prostitution happens beneath the surface, out of sight.

Stanislawski said people should look for signs like someone they know suddenly wearing expensive clothing or uncharacteristically expressing anxiety. or isolating themselves from friends. While many victims of trafficking are runaways, some may continue to live at home and go to school, she said. Stanislawski advised anyone who suspects trafficking is taking place should tell police, a teacher, a school administrator or should call the National Human Trafficking Hotline 1-888-373-7888.

Morgan said, “We wanted to help our community figure out ways to check out on their friends. Make sure everyone’s doing OK. We just wanted the community to be more aware of what’s going on.”

The five had decided to do their senior project on human trafficking after a speaker from the Stark County Children’s Network talked about the horror of the problem in Ohio at a Model UN class the last school year, Morgan said.

The organizers said they placed signs with facts about human trafficking around the track. They encouraged participants to wear blue. They played music during the event and held a moment of silence for victims of trafficking.

“People just don’t know just how big (trafficking) is,” said Jennifer Hamilton of Lawrence Township, who took part in the walk. “And Ohio is a hotspot for trafficking, so that’s why we’re here.”

Jackson senior Zachary Charlick, 17, who did the walk with two of his friends said, “I think there’s many issues in our community that we have blinders especially in Jackson because they’re not very visible. Poverty, human trafficking’s a big one. And I just think it’s important to bring awareness to how big of an issue it really is. … The first step to really solving it is to just bring awareness to the table.”