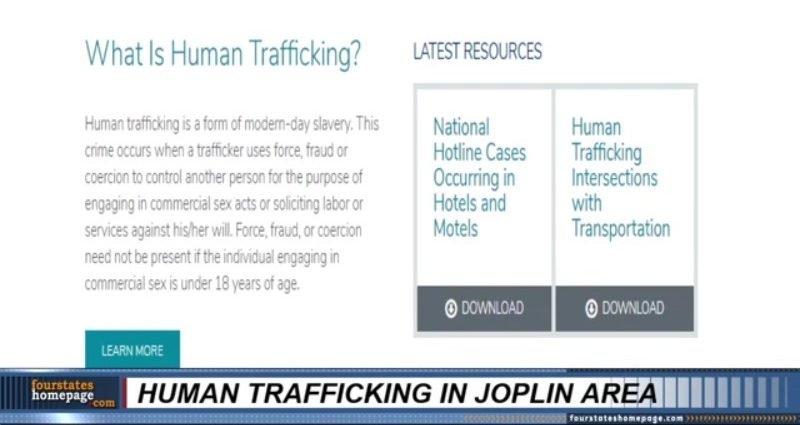 Joplin’s battle in fighting against human trafficking coincides directly with the nation’s battle, as professionals from the local area spoke out on the issue. Whether it’s sex trafficking or labor trafficking, both are found in the four states area.

Andy Blair, Joplin Police Department Sergeant, has worked alongside detectives in human trafficking cases and since has gotten involved with Joplin’s local RISE Coalition. Blair said that human trafficking is a prevalent issue found in Joplin.

“It’s not uncommon, I’ll tell you, I mean trafficking—crime-wise—it’s one of the biggest crimes that you see, whether it be internationally or nationally,” Blair said. “It’s, money-wise, it’s bringing in a lot of money in those worlds. …”

Blair’s reasoning for why human trafficking is found so often in Joplin is due to the city’s interstates, comparing it to the illegal drug-related system.

“… One reason that Joplin is such a point for that would be because of our interstate movement,” Blair said. “Just like in the narcotics world and the guns and money-type world, the interstates are a point of access for that movement for the traffickers, gives them easy access to jump from town to town, move across the country. Obviously with I-44 and 49 we have easy access of moving different directions, so that makes us a pretty good hot point. We’re one of the bigger cities in our area, other than Springfield in southwest Missouri we’re one of the biggest, which also helps feed that. You know, we have a pretty big hotel district, that is common for it to occur. Different things of that nature.”

Maggie Schade, coalition coordinator with RISE Coalition, explained that for the Joplin area specifically, individuals have a dated view of how human trafficking affects individuals and what situations look like. Schade said that now they are seeing more human trafficking happening online than anywhere else.

“So human trafficking is, it’s happening everywhere,” Schade said. “A lot of people don’t totally believe that it is or they don’t see that it is, I think because they have a really limited view of what human trafficking is. … So much of what we see around here involves some type of an online presence, whether it just starts online or the whole thing is done online. …”

Schade introduced the phrase “sextortion,” which is a tactic that traffickers use to lure individuals to share illicit photos and videos online as a form of “threat humiliation” to continue to get what the trafficker wants. She stated that the form of human trafficking looks different now than it did in years past.

“… Now we’re saying your child is much more likely to be trafficked from their own bedroom …” Schade said, comparing it to when children were told to beware unmarked white vans.

Schade and Blair both gave the example of the movie ‘Taken,” saying many individuals see human trafficking like how the movie portrays it, but that that’s not exactly accurate.

“… While that’s not unreasonable for that to happen—that it could happen—that’s not the norm, that’s not the trafficking you’re going to see day to day where somebody is swept off the street and is taken and used in trafficking,” Blair said. “A lot of times it’s people that they know and it’s what some would deem is the prostitution world, which isn’t necessarily what’s actually going on, it’s the trafficking type deal going on. …”

Within the Joplin area, Schade said that child pornography is quite prevalent, as she said, “We see a lot of cases of that.” Another way children or vulnerable adults are lured by human trafficking is through grooming.

Blair explained that Joplin is location of both sex and labor trafficking, but that they take many forms, ranging from restaurant labor to being abused by someone the person knows. One form Blair said they have specifically seen in Joplin is the massage parlor industry.

“Human trafficking can be all kinds of things, first of all,” Blair said. “You have the sex trafficking world, you have the labor trafficking world—and we have both of that type of stuff, it’s not uncommon here, whether it be in the restaurant industry or the cleaning industry or whatever it is, there’s obviously some labor trafficking stuff going on. We have the sex trafficking industry with … hotels in the area, easy access there. And then just on the other side of that, the things that people don’t think about is the family side of things with—it’s sad to talk about, but it does happen—where it’s family members that are trafficking their own kids, or nieces and nephews, or siblings, or whatever it is, it occurs that way as well.”

Schade discussed the idea that many people in the Joplin area do not see human trafficking as a problem, stating this is because Joplin is not a coastal city and that people instead see it as a “good, safe, Midwest town.” Though, Schade said human trafficking is “definitely” a problem in Joplin.

“But the truth is, it does happen here,” Schade said. “Because so much begins or happens online, then basically no town is exempt from that. … Human trafficking becomes an issue for every town no matter how insulated they feel like they are, because of the prevalence of cybercrimes—it’s just taking over towns everywhere, Joplin included.”

Blair encourages individuals to get involved with local organizations like RISE Coalition in order to raise awareness, as he said awareness is a large part in fighting against human trafficking.

“If people see something, they need to say something, that’s what this comes down to,” Blair said. “We’re human beings and we need to be human beings to each other and take care of each other. … Awareness is the big combative of this. If people are aware of what their surroundings are, what’s going on, we can’t be everywhere all the time, as law enforcement, and see that, and if we don’t have people calling us we’ll never get anywhere. …”

While Blair said Joplin has been proficient in raising awareness of human trafficking, he added that more can always be done.

“It’s absolutely here, 100 percent,” Blair said. “It’s in our backyard, as we like to say—not like to, but as we say, it’s here. Something I will tell you that Joplin has that a lot of other communities don’t have going on as much is the awareness … Obviously, we can always do better, we can always train more, but as far as getting that initial training and the awareness out to our community and community members knowing that, hey, this is a problem here, this is something we can combat, this is something we can fight. I think we’re ahead in that. …”