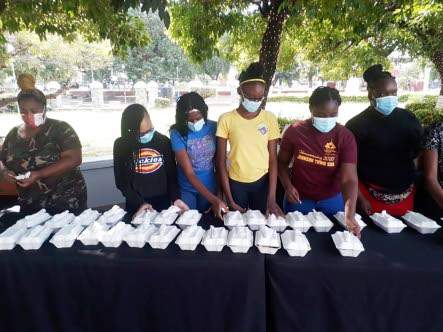 THE Kingston and St Andrew Municipal Corporation (KSAMC) yesterday fed some 600 homeless people across the city as part of its annual Christmas and New Year’s Day feeding programme.

Councillor for Seivwright Gardens Division and Mayor of Kingston Delroy Williams told the Jamaica Observer yesterday that the gesture is part of the corporation’s push to promote Kingston as not only a creative city, but a caring one.

According to Williams, the programme runs in tandem with KSAMC’s recently launched ‘Soup Kitchen’ which provides hundreds of meals daily to the homeless and indigent in the city.

“It is an annual event that we do. On Christmas Day we feed and care for the homeless at the Marie Atkins Night Shelter and on New Year’s Day we do it at the St William Grant Park. Because of the coronavirus pandemic we made a few changes but [nevertheless] decided that it was too important for us to not continue,” the mayor said following yesterday’s activities.

“The programme is one that is important to us because in defining our city and giving our city character it must be said that we are a caring city. We really want to project that going into 2021 and promote Kingston as a caring city, which means that how we treat the homeless and those among us who are vulnerable is very important,” he noted.

Additionally, he said that the KSAMC Soup Kitchen, a joint partnership between the Ministry of Local Government and Rural Development and the corporation, will continue to run throughout the year.

“It’s a soup kitchen that will be ongoing, which means that we’re providing 1,200 meals daily. So we give 600 meals twice per day – in the morning and about 2:00 pm. That is a programme that we are constantly reviewing and upgrading to make it as efficient as possible,” said Williams.

Meanwhile, the mayor told the Jamaica Observer that the construction of a “transitional facility” for the homeless, to be located on King Street in downtown Kingston, is to begin shortly and is expected to be completed before year end.

“The facility we’re looking at is to provide accommodation for about 100 people. We have been working through the design between October [and] December. The pandemic would have affected our revenues so we have been reviewing how we will execute it, and pretty soon we will make a final decision in terms of what design we go with in light of the cost and the decline in revenues.

“But, we expect to commence construction quickly and hopefully we can finish before the end of the year. We’re really looking at 2021 to complete it. For sure, we will begin in the early part of the year – and that is to provide accommodation and other services that will aid the homeless,” said Williams.

The overall cost of the project has not yet been finalised.