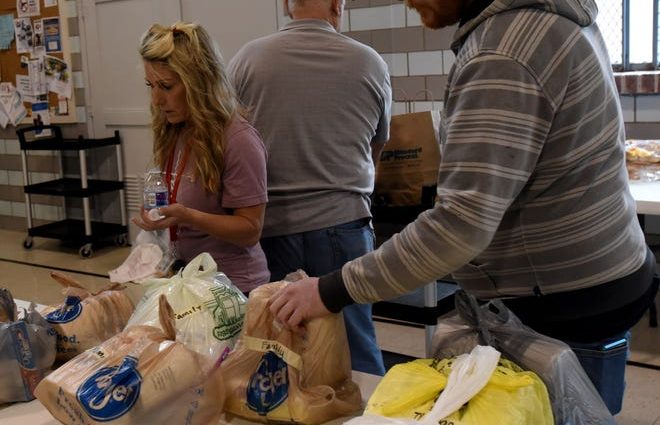 NEWARK – While the COVID-19 pandemic had everyone on edge when it first took hold in the spring, local businesses, organizations and individuals were still able to put smiles on the faces of Licking Countians.

In some cases, it was food in their bellies.

Kindness abounded around the area as people stepped forward to help those in need.

Look Up Ministries, on O’Bannon Avenue in Newark, thought they may run out of supplies, as they tried to provide hygiene and food bags for needy families and individuals during the pandemic. But, Scott Hayes of Vertical 196 Hope Center, founder of Look Up some 15 years ago, and others stepped in with donations, and Look Up had plenty to get them through a week in March and longer.

“I decided to get every single supply we had out,” executive director Lori Hubble said. “They were not doing us any good in the closet. We had toilet paper, hand sanitizers, toothpaste, toothbrushes and hand soap. We also had family meals and individual meals. You can make them at home. But our budget is very small. Our pantry is limited. We depend on the donations to keep our programs going.”

Vertical 196, a drop-in for homeless people on South Fifth Street overseen by Licking County Jail Ministries, was providing to go lunches during the coronavirus situation. But then, an idea was hatched.

“Instead of preparing all of the lunches in house for our guests, we are asking for monetary donations to help buy the lunches from local restaurants. It’s win-win,” the group said on its Facebook page. “We help support the local businesses, while still providing a great meal for those struggling with homelessness. This sounds like an easy task, but it increases our food budget by 70-80 percent as we estimate the cost to be around $3,000 weekly to feed 80-100 people each day.”

With Licking County students out of school, and many relying on school breakfasts and lunches, several local eateries also joined the cause. They provided free food for kids through walk-up or carry-out service.

Franks and Sammies Eclectic Eatery, on Third Street in downtown Newark, was one of those businesses. They’ve been there for nearly six years, and gave kids a hot dog, chips, fruit and water.

“We felt like we could help those who were receiving free lunches at school,” owner Dustin Polage said. They served over four dozen lunches on a Monday, and a little after 1 p.m. on Tuesday, they had already surpassed that.

“We have a somewhat smaller budget, but others are limited as well,” Polage said. “We’ve received a good amount of donations for the fruit and water. We’re just doing our small part to help out in a time of uncertainty. Really, everyone is helping out, and that’s all that matters.”

Dairy Isle, started by Mike Fetter in 1968 and still in the family, now has three Newark locations. “Our grandfather started it, then our dad kept it going, and we intend to do the same for at least another generation,” Abbey Fetter said.

The locations on 30th Street and East Main Street in Newark served a free kids lunch that included a hot dog, fruit and drink. The Dairy Isle on Church Street, across from the Licking County Family YMCA, provided a free hot dog, applesauce and drink for kids .

“We’ve had at least 50 people the first couple of days,” Emily Fetter said. “It’s been amazing. We want to help local families.”

“We’re happy to help,” Abbey Fetter said. “A lot of kids depend on the lunches at school. We ordered extra things to make sure we were all good, and we want to continue to support them.”

Jolly Pirate Donuts on 30th Street in Newark has been in business 46 years, and served kids free donuts and milk, orange juice or hot chocolate.

B.I.G. Corner Store, on South Second Street in Newark, had been in business less than five months in March, but had already had a big impact on its neighborhood. Owners Todd and Shelly Belcher didn’t even let a burglary that cost them $2,500 hold them back.

Shelly makes sure the small store has commodities people need, like milk and bread, by getting up at 6 a.m. and going to the “big stores.”

“Most people here don’t have vehicles,” she said. “They’re walkers, and older people. I do their shopping for them. Making a profit is not our goal. It’s getting the basic essentials for people’s needs. People don’t have to come in. They can go through the drive through and we’ll bring what they want out to them.”

Local churches are also making a huge effort during this time, including Spring Hills Baptist Church in Granville. “We have targeted seven specific ways that we’re reaching out to our community during this crisis,” senior pastor Tom Pound said. In one of those ways, Gary Kirkpatrick, associate pastor for missions and congregational care, has set up a network to help the church’s senior membership

“Our records tell us we have over 300 member families comprised of age 65 and older heads of household. That’s wonderful,” Kirkpatrick said. “We gave an appeal to action to our general population, and some 60 volunteer families have agreed to help.”

Younger people are getting involved. Jensen Johnson, a 2019 Watkins Memorial graduate now attending the University of Cincinnati, thought she could help since she was home.

“With the school shutdowns, I have found myself with all this free time, and I want to be able to help in this time of need,” Johnson said in a Facebook post. “I would like to offer running to the grocery store for any immune compromised or older people in our community. Please feel free to (Facebook) message me if you need help. Not looking to charge anyone… just looking to help! I have asked my grandparents to let me help them so I will be out at stores anyways! I just want to make sure everyone feels safe and stays healthy. No need to be scared!”

In a two-week span, Newark’s Salvation Army served more than 16,000 meals to community members during the pandemic.

“We’ve basically doubled what we normally do,” Salvation Army Lt. Kaitlyn Haddix said. “We’ve served as many as 300 people in an hour. Normally, our soup kitchen does 100 meals a day. Now, we’re doing 700 or more daily.” They offered drive-through service, and served breakfast, lunch and dinner.

“We’ve been able to purchase from local food suppliers,” Haddix said. “It’s not so much hot food anymore, but food you can drop into a bag. We try to touch as few things as possible.” Hand soap from Bath and Body Works is passed out, and N95 masks are provided for first responders.

The YMCA’s Y Healthy Kids Network was started in 2015 to help fill the void of providing food for kids on weekends, and has really filled a need in these trying times. “In September of 2014, myself, (YMCA executive director) Ed Bohren and Chuck Moore (of the Food Pantry Network) got together and came up with this,” said Doug Lowe, a YMCA board member and a Newark attorney for over 30 years. “It was actually my daughter, a teacher at Carson Elementary, who put the thought into my head. She said, ‘the kids get fed twice a day during the week, but then don’t have anything left for the weekend.'”

Lowe said as soon as schools heard about it, they started calling about the network. “We’ve added extra boxes of mac ‘n cheese, because that seems to be what the kids love,” he said. “It tides them over for the weekend. We’ve done surveys that show it has been effective. Their behavior, academics and attendance have improved, and they’re not making as many trips to the school nurses on Monday, because they’re not hungry.”

The network started out serving 40 kids at one school in 2015. Now, it’s up to 20 schools and 525 kids in seven school districts. “The number of kids we serve right now (during the coronavirus) is about the same, but we’re sending a lot more food than we did before,” Lowe said. “Some people were barely making it through before. Now, they’re not making it at all. We have well over 100 volunteers who work very hard.”

“At the Midland, we have a front row view to the homeless, which is a big local problem,” Crist added. “This is our third week for this, and we’ve been greeted with the utmost gratitude. It’s not just the homeless. We’ve seen people pulling up in cars with kids in the back seat. One guy came and filled up a whole backpack. Someone questioned him taking all of that. I said, ‘maybe he needed that.'”