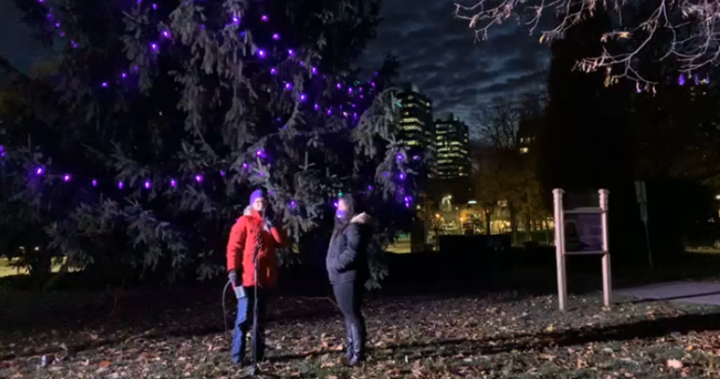 Warning: This story contains details that may be disturbing to some readers.

With the month of November now underway, the London Abused Women’s Centre (LAWC) officially kicked off their annual Shine the Light on Woman Abuse campaign on Monday with the lighting of the Tree of Hope in Victoria Park.

It’s the 11th edition of the campaign, which will see buildings in London and across Canada lit up in purple through November to raise awareness of violence against women and girls, to stand in solidarity with them, and to raise the profile of local agencies that can help abused women and girls as they attempt to live their lives free from violence, LAWC says.

Due to the coronavirus pandemic, LAWC was unable to hold a larger kickoff gathering at the Tree of Hope, located near Dufferin Avenue and Clarence Street. Instead, a small lighting ceremony was held in the park that was streamed live on Facebook for members of the community.

Present at the ceremony alongside LAWC Executive Director Megan Walker, other agency officials, and multiple city councillors was Olivea Beadle, a sex trafficking survivor who is this year’s campaign honouree.

Beadle, who spoke of her harrowing experience last week during a virtual soft launch of the campaign, credited LAWC, London police, and Anova with helping her escape three years of violent sexual exploitation at the hands of a man she says nearly killed her.

“I never knew much about human trafficking, other than what I’ve been told and seen on movies, which would be a man with a fur coat and a cane who slapped women that worked on the street,” she told the small number of people assembled at the tree lighting. “My experience was nothing like that, which made it so easy for me to be a target because I believed that was the only sign of someone being a pimp.

“Pimps don’t always look suspicious. They are really good at acting like civil people so that they can… get the women easily and people won’t look twice.”

Beadle described pimps as falling into three types: a “Romeo pimp” who uses charm, gifts, and romance to manipulate; a “CEO pimp” who uses their position of power to give opportunities to women to make good money; and a “gorilla pimp” who uses abuse, fear, and threats to gets their victim to obey.

Her pimp was all three, she says.

“My pimp started off as a CEO and then became a Romeo, and once I started to not listen to him, he became a gorilla pimp, which made it next to impossible for me to get out. Mixed emotion and fear controlled me and took over my life for years,” she said.

“I also did overnights where I had to go to client’s houses, usually out of town. I had went to Niagara Falls with a client I didn’t know and I remember being so scared that I might be killed or kidnapped.”

The man had purchased her for the night so she “could be his lady luck at the casino,” and treated her like she was a little girl, asking her to call him Daddy, she said.

“The blackjack table where the staff member was dealing the cards never once asked me if I was okay. She saw how uncomfortable I was and how odd it was for him to call me ‘little girl.’ She never helped me. And that’s the scariest thing.”

At the same time she was living with her pimp and being physically abused, Beadle attended college, graduated with honours, and was promoted to manager at the spa where she worked. It was then, she said last week, that her pimp broke her hand, leaving her unable to work. “While I was unemployed, he made me sell my body again.”

The last time she was physically abused by her pimp, who she says was also trafficking young girls, resulted in police laying a criminal charge after she was nearly choked to death.

“I had to go to the hospital again but this time I had a brain injury and they had to do X-rays on my throat because he choked me so badly that I couldn’t nearly speak, making it really hard for me to swallow foods and liquids. But I survived,” she recalled last week.

After escaping from human trafficking, she says she found it hard to figure out what clothes, music, and food she liked, since those decisions had been forced upon her for three years.

“What I like was the hardest thing for me. Accepting yourself for who you are is so important. We can’t live in the past, we change every day, we get older every year. Learning to love yourself and accept your flaws is powerful. And once you learn to do that, you can achieve anything,” she said Monday.

“If I can survive all odds and be the owner of Vay Kay spa, it’s just a reminder that nothing is impossible and getting the help you need will lead to more success in life.”

During the ceremony it was unveiled that Breadle would be the person receiving the London Police Association’s Maddison Fraser Bursary in January.

The $2,000 annual bursary, first established in 2018, is named after Maddison Fraser, a Nova Scotia woman and two-time Canadian boxing champion who was lured into the sex trade at the age of 19. Fraser died in a crash two years later in 2015 while riding in a vehicle that was being driven by a man who was believed to be a john.

Funds from the bursary come from life insurance money bequeathed to the association by a late police officer.

“I’ve been a 30 year police officer, I’ve worked in a lot of areas. I’ve worked in major crime, I’ve investigated domestic homicides, and I think I’ve pretty much seen it all,” said Dave Gilmore, the association’s president.

“Some of the horrors that some of these young women go through it’s unbelievable. And I want to commend Megan and the staff of LAWC for the wonderful, wonderful work they do. It’s difficult, it’s demanding, and it’s tough on your soul. So I just can’t say enough for the work that they do.”

As part of the Shine the Light campaign, Londoners are encouraged to wear purple to show support on Wear Purple Day, which will take place on Nov. 13. Last month, crosswalks at the northwest and southwest corners of Victoria Park were painted purple.

The start of the campaign comes as LAWC has seen an increase in demand for their services during the coronavirus pandemic.

Walker says the pandemic has forced abused women to be isolated in their homes where they’re subjected to torture and physical and verbal abuse at the hands of their abusers — abuse that is often being witnessed by their children.

“We want to make sure that women know they are not alone — they have a community and support behind them. There are resources in this community to provide women and girls with hope and with help,” she said last week.

The United Nations has called violence against women and girls a “shadow pandemic” as the COVID-19 crisis fuels social isolation and tensions caused by concerns over health, safety and financial security.

Recently, analysis by Statistics Canada found that calls to 17 police departments across Canada for domestic disturbances — anything from a verbal quarrel to reports of violence — rose by nearly 12 per cent between March and June compared to the same period in 2019.

Information, community resources and support related to sexual assault and domestic violence are available here. Information on shelters, transitional housing and drop-in centres for women can be found here.