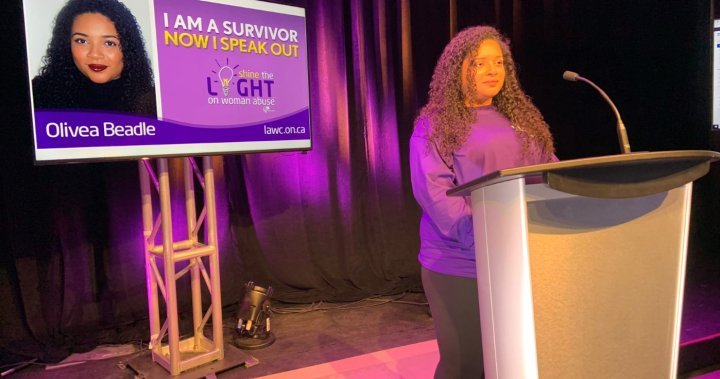 The annual Shine the Light event in London, Ont., held a launch event Thursday with a success story shared by a woman who escaped sexual exploitation.

Olivea Beadle says at one point her pimp choked her with the intent to kill her, but today she’s celebrating two years of being free from human trafficking and two years as a small business owner.

“I have been given the opportunity to use my voice to give women and girls hope that they can leave the sex trade and be successful in life without having to resort back to escorting,” she said at Thursday’s virtual launch event for the 11th annual Shine the Light on Woman Abuse campaign.

“London Abused Women Centre has played a great role in helping me stay out of human trafficking by providing me all the resources I needed to stay safe and secure and find a place to live.”

The Shine the Light campaign runs throughout the month of November and will see buildings lit up in purple to raise awareness of violence against women and girls, to show support for abused women and girls, and to focus on local community groups that provide help for women and girls taking steps to “live their lives free from violence and abuse.”

At Thursday’s launch, the first-ever virtual one due to the ongoing COVID-19 pandemic, London Abused Women’s Centre executive director Megan Walker stressed that the pandemic itself makes the Shine the Light campaign that much more pressing.

“We’ve seen a 28 per cent increase in our service demand since COVID and demand for service continues to increase,” she said.

“Because of COVID, abused women are isolated in their homes every day with their abuser, where they are forced to endure incredible acts of torture, assault and verbal abuse. And their children are witnessing this and exposed to it every day.”

“We want to make sure that women know they are not alone –they have a community and support behind them. There are resources in this community to provide women and girls with hope and with help.”

Beadle says LAWC’s resources made a huge difference in her life.

She also says that when she reached out to let staff know that the women’s support group wasn’t helpful to her as it focused on domestic abuse, the team responded by creating the Phoenix program with a specific focus on human trafficking, in partnership with the Salvation Army and Youth Opportunities Unlimited.

“When I was escorting, every day was a struggle mentally, physically and emotionally. When you’re in that state of mind, it’s hard to see the good or even plan a future outside of trafficking when you’re trying to live day-by-day in a scary environment,” Beadle explained.

“The Phoenix group helps me heal and forgive myself for the things I have done and experienced.”

Beadle said she was an escort for three years. During that time, she went to college and graduated with the highest academic award and was also awarded for leadership skills and excellent attendance. On top of that, she says “I was battling life-threatening illnesses as I am a person with disabilities.”

After graduation, she was promoted to manager at the spa where she worked. It was then when she says her pimp broke her hand so that she would be unable to work.

“While I was unemployed, he made me sell my body again,” she said.

“When I went to the hospital to be treated for my injuries, a staff member referred me to London Abused Women’s Centre so I could get the help and support I needed to safely leave my pimp as I lived with him, making my situation very risky.”

Beadle says the abuse continued and she would show up to work with marks on her skin, prompting her employer to reach out to her to try to help her leave, and also encourage her to see her own worth.

“Here’s a photo of the last time he put his hands on me,” she said.

“I had to go to the hospital again but this time I had a brain injury and they had to do X-rays on my throat because he choked me so badly that I couldn’t nearly speak, making it really hard for me to swallow foods and liquids.

“I just celebrated my two year anniversary in September, not only for my business, but also two years of being free of human trafficking and two years of being safe. And for that I am hopeful that other women and girls can feel safe one day, too,” she said.

“We all can save a life today.”

The Shine the Light campaign will officially kick off on Monday, Nov. 2 at 5:30 p.m. with the lighting of the Tree of Hope at the corner of Dufferin Avenue and Clarence Street in Victoria Park. Beadle will be on hand for that event to share her story.

“We hope everybody will attend that virtually,” Walker added.

“We’re getting a lot of calls from people who would like to attend physically, and, of course, it’s a public park. We know for some of you, there’s great meaning in attending this event because it is very powerful. If you come, we will be expecting you to wear masks and also, we will have social distancing.”

The campaign’s Wear Purple Day will be held Friday, Nov. 13.

“I remember the first year we did this and I was driving down the street near Fanshawe College and I saw all of these young kids getting onto a bus wearing purple,” Walker said. “It was really inspiring and provided me with a great deal of hope.”

In another reference to the pandemic, LAWC’s merchandise in support of the campaign will also include limited-edition face masks.

Usually, the campaign honours one survivor and one woman who died as a result of violence against women but this year LAWC says it decided to honour only one woman.

Experts had long been raising concerns about how the pandemic could exacerbate issues of violence against women. Results from a national survey, released in August, showed an increase in gender-based violence (GBV) combined with more barriers to access support services.

Data from Statistics Canada last month showed that calls to police for domestic disturbances, classified as either disturbances or disputes, increased as the coronavirus pandemic took a foothold in Canada. The report found that these calls, in addition to wellbeing checks, each increased by 12 per cent between March and June, compared to last year.

Just last week, several helplines for women experiencing violence at home reported dramatic increases in calls across the country since the spring.

As part of a two-part series this month, Global News shared the stories of two survivors of sex trafficking in Calgary, Alta., and how the pandemic has impacted their journeys. A third woman Global News first met in February who had also been seeking help from Calgary’s RESET treatment centre, left the city during the pandemic lockdown and returned to her old life.

In May, Global News reported on the economic impact of the pandemic on those involved in sex work.

“For most sex workers, their income has completely dissolved,” Jenny Duffy, a board member at Maggie’s, a Toronto-based sex workers’ rights organization, said at the time.

In July, Amnesty International Canada joined a number of human rights and sex work advocates in a lobbying effort asking federal Justice Minister David Lametti for a moratorium on prostitution laws, arguing that they create undue harm and contribute to human rights violations during COVID-19. They also raised concerns over the fact that sex workers were ineligible to receive emergency income supports despite seeing their incomes disappear overnight.

However, LAWC has long-advocated for the Nordic Model, which decriminalizes prostituted women, criminalizes sex purchasers, and mandates robust funding for services for women to exit the sex industry.

LAWC believes that “the overwhelming majority of women do not choose to be sexually exploited into the commercial sex trade.”

“The London Abused Women’s Centre recognizes prostitution as male violence against women; incompatible with women’s equality and human rights; and gendered and racist with women and girls as the overwhelming majority of those who are prostituted and trafficked,” Walker said in late August.

Information, community resources and support related to sexual assault and domestic violence are available here. Information on shelters, transitional housing and drop-in centres for women can be found here.