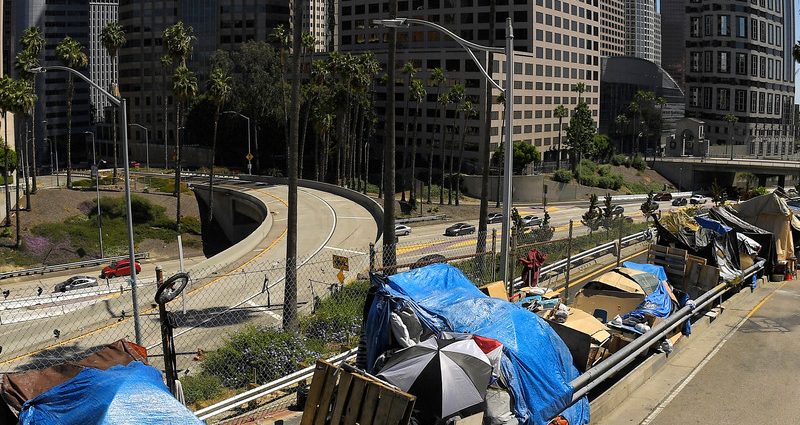 On Wednesday, the Los Angeles City Council delayed a vote on a change to the city code allowing for the removal of homeless camps in the city if shelter had been offered first.

Los Angeles has seen an explosion in homeless growth ever since the Great Recession in the late 2000’s due to a combination of many factors, including, most prominently, rising housing costs and the lack of affordable housing in the city. While Los Angeles has had laws regulating sleeping on sidewalks since 1968, the problem has led to an all-time high of homeless sleeping on sidewalks in the city since a 2018 Appeals Court ruling that barred cities from citing people that did so.

However, with a recent ruling by a district court charging Los Angeles with failing to address the homeless crisis and needing to find shelter for homeless living near freeways, the city has found itself with more options, including the removal of homeless camps and tents within the city.

The anti-camping ordinance proposal, written by City Attorney Mike Feuer, is based both on the need and now legal obligation to house more homeless who live under or near freeways, as well as to comply with the Americans with Disabilities Act in allowing  those with disabilities or in wheelchairs enough room to navigate a sidewalk.

The proposal would also stop the homeless from resting long-term near schools, day care centers, parks, and other places where children may be. Tents are also barred near homeless shelters themselves.

The most controversial amendment of the ordinance would allow law enforcement to remove any homeless camp as long as shelter was offered first.

Pressure from the public both for and against the ordinance came to a head during the City Council meeting on Wednesday. Many who favored wanting the homeless off the streets pointed out that there is not currently enough shelter space in the city to make the ordinance feasible.

“I fundamentally believe, as I’ve stated before, in a right to housing,” explained Mayor Eric Garcetti before the City Council meeting. “I’m optimistic that we could see a huge expansion of our housing programs and that, more than anything else really are the solution. Otherwise, you’re trying to clean up a mess that continues to get worse and worse.

“I do believe that not all public space can just be a place where all people can camp but it’s inhumane to move people along without having shelter available for them.”

Other Council Members echoed his concerns.

For Councilman Mike Bonin, that wasn’t enough. He argued that the city needed to have sufficient shelter available before it tried to ban camping.

“My problem with the ordinances before us is they assume the existence of the alternative resources,” said Councilman Mike Bonin. “They’re frankly not there yet.”

However, other members of the Council pointed out that the ordinance would not go into effect until more shelter space is in place.

“We have to have a system that says, ‘we have the beds, and here’s where they are,’” said Councilman Bob Blumenfield, a main backer of the ordinance. “But down the road we can say to the people on the streets, ‘here’s an alternative to sleeping on concrete tonight.’”

Blumenfield also argued that areas around freeways needed to be clear of homeless people to comply with what the District Court had ruled. By allowing authorities to legally move them, it would ensure that they don’t set up camps after being cleared away and would keep in compliance with the Court in the future.

Opposition to the ordinance proposal

Councilman Bonin also proposed an alternate solution to the problem on Wednesday.

“The way to get people off the streets is through housing, shelter, and services, not legislative fiats that only serve to push encampments deeper into residential neighborhoods,” explained Bonin. “Los Angeles consistently tries to lead with enforcement, and consistently fails. If we want to house people and keep sidewalks clear, let’s commandeer vacant hotels, lease apartment units, and get people housed immediately.”

Over 40 homeless advocates, who are strongly opposed to the measure, protested outside the City Hall during the meeting.

“They want to move people away from the safest places they have left,” explained homeless advocate “Jaze” Jackson to the Globe. “Living under overpasses provides at least some shelter from the elements. Tents are not 100% in keeping out the elements.”

“And this would make LA into a police state. It would make being homeless a crime. Being legally moved simply because you are sleeping there. LA failed the homeless in this city long ago, and they simply don’t care what happens to us.”

“And think about it. They want us in shelters. not only are there not enough, but there is COVID happening right now. According to LA, they want our only options to be tents that can be taken out and away at any time, shelters where we can probably catch a deadly disease, or straight up dying. Either way it goes, we lose. Big time. They just don’t care, even when they say they do or make plans to do that.”

After four hours of debate, the City Council eventually stopped and decided to continue the debate on November 24th rather than leave it for a committee to decide.

If approved next month, LA’s ordinance would follow Oakland’s new homeless policy passed last month that halted the homeless from setting up tents in most areas, including near parks, homes, schools, and businesses.

Evan V. Symon is the Senior Editor for the California Globe. Prior to the Globe, he reported for the Pasadena Independent, the Cleveland Plain Dealer, and was head of the Personal Experiences section at Cracked. He can be reached at evan@californiaglobe.com.