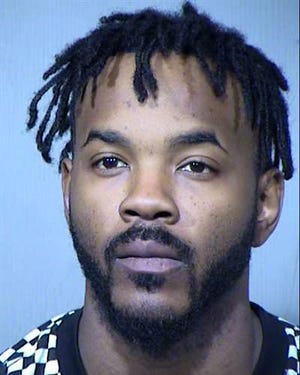 A man who pleaded guilty to sex trafficking two women and a girl was sentenced to 10 years in prison, lifetime probation and sex offender registration in January, according to a statement released Friday.

The Arizona Attorney General’s Office alleged that Louis Broadway-Phillips, 27, advertised on the internet from 2017 to 2018, took the women and girl to hotel rooms and forced them to perform prostitution acts in exchange for money.

While released and pending trial, Broadway-Phillips contacted the women to threaten and try to convince them not to testify. He also used social media and his friends to harass and intimidate the women, according to the Attorney General Mark Brnovich.

In October 2019, Broadway-Phillips was charged in a new case for influencing and tampering with witnesses after the state said all three victims reported Broadway-Phillips for contacting them, wanting them to relinquish their rights and recant their original statements, according to the attorney general.

The statement also said that Broadway-Phillips tried to bribe one of the victims with money, food, clothes and a ride to court.

Broadway-Phillips had already been indicted in April 2019 for illegally conducting an enterprise, money laundering, child sex trafficking, sex trafficking, pandering and receiving earnings of a prostitute and was held on a cash bond of $25,000.

He was then indicted by the state in October 2019 for one count of influencing a witness and two counts of witness tampering and was held without bond.

Broadway-Phillips pleaded guilty to illegal control of an enterprise, attempt to commit sex trafficking of a minor, sex trafficking, tampering with and influencing a witness.

A superior court judge sentenced Broadway-Phillips to 10 years in prison followed by lifetime probation and sex offender terms on Jan. 7.

“Justice demands that we hold traffickers accountable for their actions,” Brnovich said in a statement. “Perpetrators use coercion and fear to re-victimize their vulnerable trafficking victims over and over.”

Homeland Security and Mesa Police Department investigated the case, according to the Arizona Attorney General’s Office.

“This is just one of many cases that underscores the importance (of) working together with our state and federal partners,” said Mesa Police Chief Ken Cost in the statement.

Reach the reporter at Audrey.Jensen@arizonarepublic.com or on Twitter at @Audreyj101.

2021-01-22
Previous Post: Sex trafficker sentenced to 10 years in prison
Next Post: Of victims and saviors: Sex work amid the pandemic