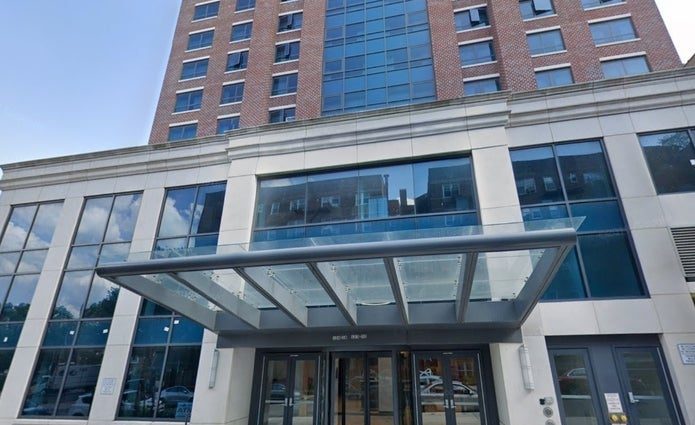 KEW GARDENS, QUEENS — A man has been charged with child sex trafficking at a Kew Gardens hotel that local elected officials and residents say has become a hotbed of crime during the pandemic.

Jordan Adderley, of Brownsville, Brooklyn, was arrested on Oct. 1 on charges that he sexually assaulted a 16-year-old girl and forced her to prostitute herself at the Umbrella Hotel on Queens Boulevard and another hotel in Jamaica, according to police and prosecutors.

Adderley was taken into custody after an undercover police officer showed up at a hotel room in the Umbrella Hotel that night, posing as a customer, according to the criminal complaint filed against him.

The Umbrella Hotel’s owner could not be reached for comment.

The arrest, which hasn’t been previously reported, was revealed last week in a private meeting about the hotel with City Hall officials, NYPD officers and local stakeholders in Forest Hills and Kew Gardens.

The NYPD’s 102nd Precinct has stationed police officers outside the Umbrella Hotel since the summer, after there were two shootings just weeks apart, and will continue to do so for “as long is it takes,” according to Ethan Felder, a district leader who was on the Oct. 7 call.

Apart from a list of recent arrests at the hotel, including the one for sex trafficking and several more for assault, officials had little to offer, attendees said.

“From the City Hall standpoint, there was no point to the meeting because they had no solutions to offer, or answers to offer the community,” Felder told Patch. “We’re looking for a plan, and they had no plan to present.”

New York Assembly Member Dan Rosenthal suggested that City Hall put together a multi-agency inspection of the hotel helmed by the NYPD and pull the hotel’s license “before more people are put in harm’s way,” he told Patch.

He and City Council Member Karen Koslowitz, who also represents Kew Gardens, have pushed the city to shut down the hotel, arguing the police presence has done little in the way of deterrence.

Rosenthal said the situation has now reached a breaking point.

“After months of requests, the Mayor’s Office finally organized a meeting to discuss the situation at the Umbrella Hotel,” Rosenthal said. “In an utter display of disrespect to attendees and the entire Kew Gardens community, City Hall showed up with no answers.”