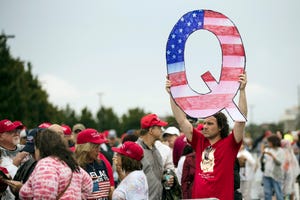 The McCain Institute has joined with more than 75 other organizations nationwide that work to combat human trafficking in signing a letter decrying misinformation spread by the QAnon conspiracy theory.

The letter, released Wednesday, says falsehoods about Democratic politicians are being spread, in part, to influence the November general election. That is an assertion Cindy McCain, the wife of the late U.S. Sen. John McCain, made in a September meeting of the official Arizona anti-trafficking council.

Followers of the baseless QAnon narrative believe President Donald Trump has been actively investigating a global child trafficking ring operated by powerful politicians and celebrities. Adherents to this theory have posted anti-trafficking messages on social media and have started in-person Save The Children rallies.

CHECK OUT: QAnon-linked Save the Children movement is derailing local anti-trafficking organizations

But, according to the letter, those efforts, fueled by falsehoods, are not helping matters.

In the letter, the groups say they “are alarmed and deeply disturbed by the intentional spread of conspiracy theories and disinformation about sex trafficking aiming to sow fear and division in order to influence the upcoming election.”

“Anybody — political committee, public office holder, candidate, or media outlet — who lends any credibility to QAnon conspiracies related to human trafficking actively harms the fight against human trafficking,” the letter reads. “Indeed, any political committee, candidate, public office holder or media that does not expressly condemn QAnon and actively debunk the lies should be held accountable.”

Besides the McCain Institute, the letter is signed by the Arizona State University Office of Sex Trafficking Research and the Phoenix Dream Center.

Trump has claimed to not know much about QAnon other than that its followers are supporters of his and that they are against people having sex with children. “I do know they are very much against pedophilia. They fight it very hard,” he said during a nationally televised town hall event this month. “But I know nothing about it.”

Cindy McCain had asserted during a September meeting of the Arizona governor’s Human Trafficking Council that the spread of QAnon theories, which paint Democrats as child predators, is being amplified for political reasons.

“Their whole point is to affect the election,” she said. “It’s the lowest common denominator. But that’s exactly what’s going on and they’re doing it on the backs of trafficked children.

She called such actions “despicable.”

The letter, posted on the McCain Institute website and other locations online, echoes that sentiment.

Anti-trafficking organizations have seen a rise over the past year in interest in the cause. But some of those volunteers need to be disabused of QAnon-type theories, said one organizer.

“We now have this responsibility to myth-bust like never before,” January Contreras, CEO of ALWAYS Arizona, told The Republic this month.

Adel Belgaied, who organized a Save The Children rally in Phoenix in August, told The Republic in an interview this month that he was not motivated by the QAnon movement specifically. Though, he said, he did believe there was a group of powerful people who traffic in children for sex, occasionally abducting them off the street.

Belgaied said that he believed spreading any information about child trafficking was helpful, even if it was false. “Anybody fighting it is doing the right thing,” he said. “If you say two words, you’re doing something.”

Longtime foes of sex trafficking have a narrative based on interviews with survivors and police accounts. Those paint a picture of vulnerable women conned into selling sex for money, sometimes by strangers, but often by boyfriends or relatives.

As the letter released Wednesday reads, “The majority of trafficked youth have been abused or neglected, have run away or don’t have stable housing, or are immigrant children fleeing violence in their home countries to seek refuge in the United States. They are the youth that we as a society have failed.

“They are not abducted by strangers or Hollywood elites — they are abandoned by failing and under-resourced systems. There is not a deep state cabal of Democratic politicians and Hollywood celebrities who traffic children for sex. No major political candidate or party supports or condones pedophilia or human trafficking.”

These advocates have worked for years to change the way the issue has been viewed. Law enforcement had viewed prostitution as a nuisance crime and the women involved criminals who needed to be arrested or swept away from an area.

The issue has become one law enforcement sees the women involved as victims in need of help. In the mid-2010s, Phoenix had experimented with a program that offered women, upon arrest, a diversion program rather than jail time. The American Civil Liberties Union and others criticized the program for only offering help under the coercion of arrest.