Milwaukee is a human trafficking hot spot. How one group is helping. 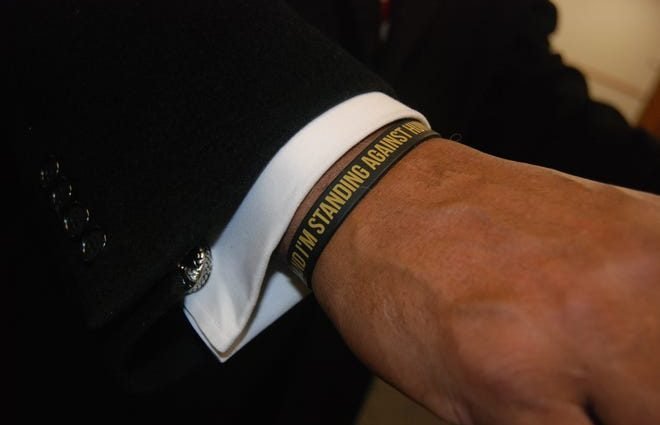 With poverty and homelessness expected to rise as the coronavirus pandemic continues to rage, advocates are concerned that an increase in human trafficking is sure to follow.

One Milwaukee initiative is focusing on the demand side of that problem.

The HEMAD campaign — Human trafficking Educators working with Men and boys Against the Demand — invites men to learn about human trafficking and take a pledge to fight it.

The campaign was started out of Milwaukee’s Convergence Resource Center in November 2018. The center has helped women who are survivors of trauma since it opened in 2004.

“We thought we’d help them at the center and help them get resources, but over the years, it has just evolved into working with trafficking survivors,” said Carla McKiver, who along with Debby Lassiter co-founded the organization.

“Dr. Lassiter saw a need that we can’t just address the survivors. We really have to address the need.”

Now is a more critical time than ever.

Sarah Fandler, an executive administrator for the Milwaukee-based organization Exploit No More, said demand has significantly increased because of the isolation caused by the pandemic. “Anybody who works in the trafficking field would tell you that if the demand was not there, traffickers would not traffic people. There’s such a lack of human connection, and loneliness, and that can really lead people to seek out sex.”

She said traffickers know this, too.

“Traffickers have even been advertising that this is the prime time to start your trafficking business,” Fandler said. “I’ve heard them being quoted as saying, ‘It’s like prime picking now.’ ”

More evidence of a link between the economic hurdles brought on by the pandemic and an increase in human trafficking came in the form of a study published in JAMA Pediatrics. The study’s authors found that homelessness and a history of child maltreatment are strong risk factors for human trafficking.

RELATED:‘This isn’t just a Milwaukee issue’: New report examines where sex trafficking happens and where victims are from

A state Department of Justice  survey of Wisconsin law enforcement released in 2020 found that between 2014 and 2017, there were 118 incidents of human trafficking. And a 2018 report found that roughly 340 young adults and children experienced sex trafficking between 2013 and 2016 in Milwaukee.

Devin Thomas is a clinical assistant professor and field liaison at the University of Wisconsin-Milwaukee’s Helen Bader School of Social Welfare. She has been working as a social worker helping youth and young adults who have experienced trafficking and violence for nearly a decade.

Although this is not a new problem because it’s rooted in poverty and lack of opportunity, the pandemic has exacerbated it, she said.

“When you are without housing or basic needs … many of our young people and others in the city will fall into survival mode and end up trading sex for shelter, food or clothing,” Thomas explained.

Renee Kirnberger is the senior vice president of development and communication at Pathfinders, which helps runaway and homeless youth, including those who have been trafficked. She said a lack of affordable housing and family-supporting jobs has made Milwaukee a target for traffickers, who tend to exploit financial and emotional vulnerabilities.

“Too many people have to work too many jobs to pay their rent,” Kirnberger said. “As a community, we know that while our rent rate isn’t super, super high, our pay rate has not increased comparably. That’s one of the major issues that leaves young people vulnerable to having to turn to the street economy.”

HEMAD pledge spreads across the country

Cifax, who is director of the HEMAD campaign, said the issue became real for him when he thought about his own family.

“My focus was on my granddaughter and my female cousins,” he said. “It really moved me when I started putting my family in the place of those who had been trafficked and abused.”

The pandemic is a particularly dangerous time for survivors of trafficking as well as young people spending more time online, Cifax said.

“The potential danger right now is that it may move people to an emotional state and some triggers that may cause them to want to go back into that life,” he said. “Another danger is that it opens up opportunities for handlers to try to convince girls and boys to get involved in this.

“Parents in these communities need to be aware that these dangers are out there.”

The HEMAD campaign targets men’s spaces and fatherhood groups such as Fathers Making Progress, a group founded by Terron Edwards, who supports the campaign.

Edwards likes that the HEMAD campaign focuses on encouraging men to speak out against violence against women and change the norm.

“A lot of times, guys will say stuff like, ‘She did this and she did that, so I slapped the (expletive) out of her,’ ” he said. “Even if we might look at each other like, ‘I can’t believe he did that,’ nobody calls it out. So that’s how even us non-perpetrators, well-meaning men and ‘good guys’ — through our silence — allow predators to operate.”

So far, 68,050 men have taken the HEMAD pledge nationwide.

State Rep. Jason Fields, D-Milwaukee, who has supported the HEMAD campaign since its launch, said he sees promise in its progress.

“I think we’re in an unprecedented time,” Fields said. “We’re reaching more men. More men are starting to understand and take it seriously, and more men are saying I want to get involved and do what I can to help eradicate sex trafficking.”

Here’s how you can help or get help:

There are many local and national organizations that help youth.

LOTUS Legal Clinic: lotuslegal.org. You can contact it at info@lotuslegalclinic.org or call 414-885-1469 and you can donate here.

Lacey’s Hope Project: laceyshopeproject.org. You can contact it via this webform and you can also find resources based on your southeastern Wisconsin county on this page. You can donate here.

The Human Trafficking Task Force of Greater Milwaukee is available through the City of Milwaukee’s Office of Violence Prevention. You can reach the chair of the task force at httfmilwchair@gmail.com.

The Wisconsin Department of Children and Family Services has a website with resources about sex trafficking available at dcf.wisconsin.gov/wisconsintalks.

How are we doing? Fill out this survey and let us know.