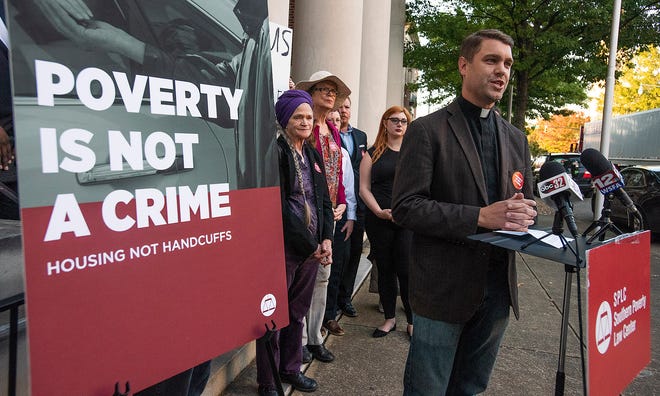 The city of Montgomery has agreed to stop arresting or ticketing panhandlers and to drop outstanding municipal cases against people previously charged in a lawsuit settlement announced this week.

Montgomery agreed to donate $10,000 to the Southern Poverty Law Center to be used on homelessness issues. In a press release, SPLC said they intend to donate the funds to Montgomery Pride United.

The Montgomery City Council in July 2019 unanimously approved an ordinance requiring mandatory jail time for people who panhandle in the city, but the legislation sparked immediate blowback and then-Mayor Todd Strange did not officially sign off on the ordinance. Some city councilors then tried to add an amendment to the ordinance which would criminalize giving to panhandlers, but the amendment failed after dozens of people protested before the vote.

In December 2019, newly elected Mayor Steven Reed pushed through a repeal of the ordinance, which the Montgomery City Council unanimously supported.

But the repeal did not address Montgomery’s use of two state laws that criminalize begging and soliciting, plaintiffs alleged in a lawsuit filed in February by the SPLC,  ACLU of Alabama, and the National Homelessness Law Center. The groups also sued the county of Montgomery and the state over the same ordinances, both of which are still in litigation.

“From day-one in office, we have championed justice and equity for everyone in Montgomery,” Reed said in a statement. “We supported the repeal of an ordinance that could unfairly penalize members of Montgomery’s homeless population. We’re actively working to make sure our administration provides better service and assistance to our neighbors who are experiencing homelessness. We look forward to unveiling new support programs in the future.”

The groups filed the lawsuit on behalf of three people experiencing homelessness in Montgomery. One, Jonathan Singleton, said he was cited or arrested eight separate times for holding a sign that read: “HOMELESS. Today it is me, tomorrow it could be you.” Singleton’s chronic illnesses have made it difficult to maintain employment and housing, the lawsuit alleged.

“The city of Montgomery is doing the right thing by ending its enforcement of Alabama’s inhumane and unconstitutional laws that criminalize homelessness and poverty,” said Ellen Degnan, SPLC staff attorney. “Housing, not handcuffs, is the way to end homelessness. While the terms of this settlement – if correctly implemented – will help people who panhandle within the city limits of Montgomery, there are still thousands of Alabamians who remain at risk of being jailed or ticketed for simply asking for help.”