Newsom to be sued over fracking permits 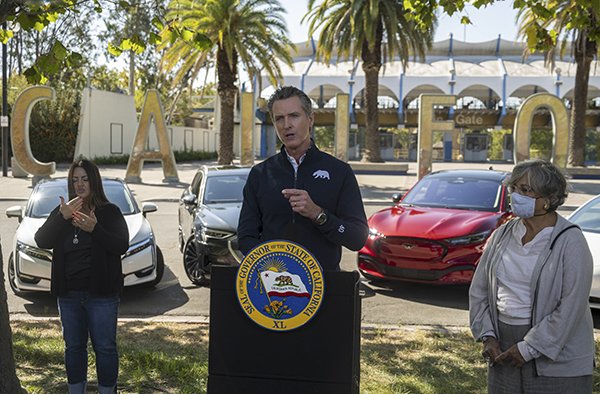 The news comes a day after Newsom delivered the keynote speech at a major event devoted to California clean energy policy and less than a month after he tasked the state Legislature with halting new fracking permits by 2024.

Siegel said the permits are “illegal” and fail to comply with the California Environmental Quality Act. The Center for Biological Diversity warned Newsom on Sept. 21 of their intent to sue if his administration continued to issue fracking permits.

Don Drysdale, a spokesperson for the California Department of Conservation, told me the permits were approved Friday following independent scientific review to ensure they met public health, safety and environmental standards. He added that the Newsom administration has approved 54 fracking permits this year and denied six.

The impending lawsuit highlights the complexities facing the governor as he attempts to fast-track the state’s transition to clean energy — i.e. his ban on selling new gas-powered cars starting in 2035 — while ensuring Californians’ energy needs are met in the meantime.

That anxiety was revived this summer after the state’s first rolling blackouts in nearly two decades, which an investigation found was largely due to agencies’ poor planning. As a result, the state decided to keep four controversial gas-powered plants running past a 2020 deadline set a decade ago.

That decision likely won’t help California reach its goal of 100% clean energy by 2045. According to data released Monday by the state’s Air Resources Board, California’s greenhouse gas emissions rose slightly in 2018 for the first time in six years.

The coronavirus bottom line: As of 9 p.m. Tuesday night, California had 874,077 confirmed coronavirus cases and 16,992 deaths from the virus, according to a CalMatters tracker.

Need another reason to vote early? As Ben Christopher writes, it might be the surest way to avoid “all kinds of bull****” after the election.

Other stories you should know

The thousands of Californians forced every year into various forms of human trafficking are disproportionately young, female and Black, according to a new report from the Little Hoover Commission, an independent state oversight agency. The statistics paint a deeply disturbing picture that remains incomplete, as the report only includes data from those who sought state help to recover from sex trafficking, labor trafficking or both.

PG&E appears to have taken a few steps backward when it comes to vegetation management policies, according to a new report from court-appointed investigator Mark Filip. Though the utility made progress in 2019 on cutting down dangerous trees that could slam into power lines and spark major wildfires, “that improvement appears to have, at best, plateaued, and perhaps actual regression has occurred,” Filip wrote. He also wrote that PG&E appears to be prioritizing rigorous inspections in low-risk areas rather than high-risk areas. The news comes as the beleaguered utility, whose equipment was recently seized in an investigation into the cause of the deadly Zogg Fire, said it would likely shut off power tonight for 54,000 customers in portions of 19 counties to mitigate fire risk amid dry, powerful winds.

Ballot measures — or threats of ballot measures — have increasingly become a way for interest groups to gain leverage in the Capitol, CalMatters’ Laurel Rosenhall reports. Dave Regan, president of the Service Employees International Union-United Healthcare Workers West, has capitalized on the strategy, taking many of the union’s battles against the health care industry to the ballot — including this year’s Prop. 23, which would add new regulations to kidney dialysis clinics.

All told, the union has spent at least $43 million on California ballot campaigns — and hasn’t won any. But Regan told Laurel that he’s seen success in other forms. In 2016, the union floated an initiative to raise the state minimum wage, but withdrew it after then-Gov. Jerry Brown agreed to sign a similar increase into law.

California released theme park reopening guidelines Tuesday, but its long-running saga with Disneyland and other major amusement parks appears to be far from over. Under the new guidance, smaller theme parks can reopen at 25% capacity or 500 people — whichever is fewer — once their county has entered the orange reopening tier, and tickets must be limited to people living within the county. All amusement parks can reopen at limited capacity once their county is in the yellow, or least restrictive, reopening tier. The state released similar reopening guidelines for outdoor stadiums.

As the state hammers out reopening plans for certain sectors of the economy, pressure is increasing on Newsom and other state leaders to focus on reopening schools instead.

TODAY, 5-6:30pm: Rebuilding and Resiliency: How We Need to Handle Wildfires From Now On. In this two-part virtual event, CalMatters examines California wildfires through the lens of Rebuilding Paradise, a new documentary from Academy Award-winning director Ron Howard. Register | Submit Your Questions

CalMatters columnist Dan Walters: California has a stubbornly high unemployment rate, and the state’s slow handling of benefit claims is increasing the pain of jobless workers.

State must help Salton Sea: We continue to see no action or purposeful decisionmaking to prioritize the needs and public health of Salton Sea communities, argue community advocates Sandra Ramirez of Coachella and Christian Mendez of Desert Shores.

Other things worth your time

San Quentin must release or transfer half of its prisoners because of lack of COVID care, appeals court rules. // San Francisco Chronicle

How Californians are employing mutual aid to help with pandemic relief. // CalMatters

Rep. Devin Nunes mailed his book about socialism to California voters. Do they want it? // Fresno Bee