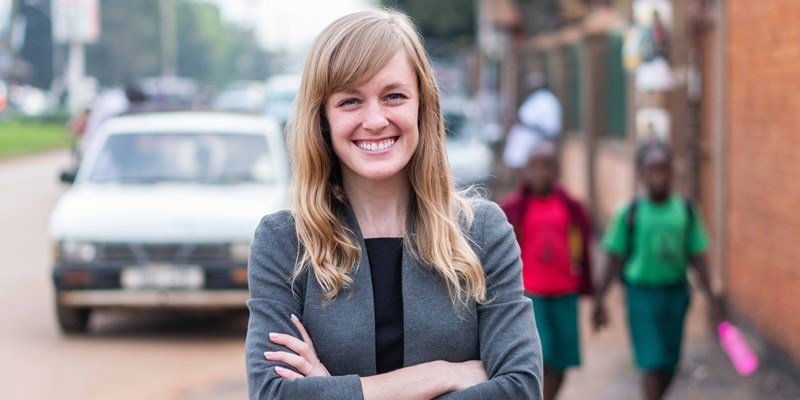 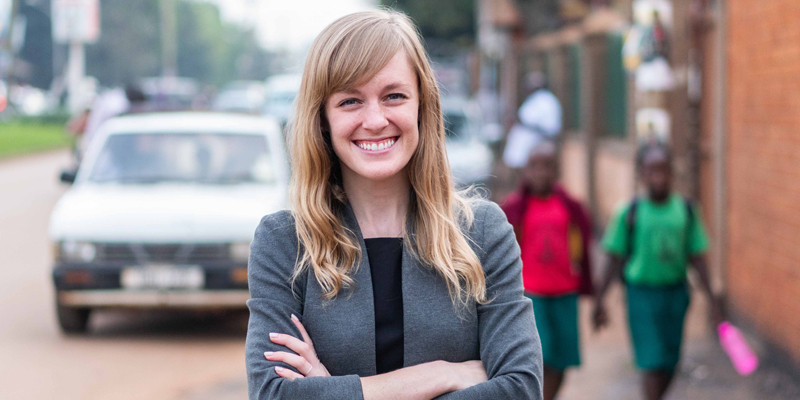 Alyssa Currier Wheeler, a 2014 Northwestern College alumna who is associate legal counsel for the Human Trafficking Institute, is Northwestern’s nominee for the 2021 Council for Christian Colleges and Universities (CCCU) Young Alumni Award.

The award recognizes an individual who has achieved uncommon leadership or success in a way that reflects the values of Christian higher education. The winner will be chosen by a committee and recognized at a CCCU conference in January. Felipe Silva, a 2012 Northwestern alumnus who founded and directs a climbing gym as a way to reach out to at-risk children and teens in an economically depressed region of Romania, won the award in 2017.

Currier Wheeler says her interest in fighting human trafficking was sparked when Northwestern brought International Justice Mission to campus. The group, which describes itself as the world’s largest anti-slavery organization, showed a video about human trafficking and their efforts in the legal system to fight it.

“The video featured the role of attorneys, which initially got me thinking about law school,” Currier Wheeler recalls. “I liked the idea of bringing a specialized skill set to international development work.”

Currier Wheeler, who majored in political science and Spanish at Northwestern, has been with the Human Trafficking Institute, which is based outside of Washington, D.C., since 2018. Among her duties is fighting trafficking in Kampala, Uganda, advising prosecutors how to investigate and convict traffickers.

Human trafficking—often called modern-day slavery—is so insidious that even when it is discovered, it can be exceedingly difficult to eradicate. Sometimes the trauma suffered by the victims “impacts the way they’re able to recall what happened to them and it impacts the level of trust they have with the prosecutors and police,” Currier Wheeler says. “Those victim-witnesses are key to the success of the prosecution, but they often face some of the most difficult challenges participating in the case.”

The Human Trafficking Institute says traffickers earn more annual profits than Apple, JP Morgan, Samsung, Wells Fargo and Microsoft combined. It is estimated that there are 24.9 million victims of forced labor in the world—people forced to work under threat or coercion as domestic workers, on construction sites, in clandestine factories, on farms and fishing boats, in other sectors, and in the sex industry.

“Everyone agrees that no one should have ever been enslaved—and certainly not today, when it’s technically illegal in every country,” says Currier Wheeler, who co-writes the institute’s annual Federal Human Trafficking Report and spoke at Northwestern about human trafficking in late October.

Currier Wheeler says when it comes to forced labor or forced sexual exploitation, there are services that combat the poverty and domestic violence that make girls and women vulnerable to trafficking, and there are services available to trafficking victims. “But there are not a lot of organizations addressing the middle ground, which is the traffickers themselves, and building up a capacity for law enforcement and prosecutors to actually make it unattractive for someone to violate trafficking laws,” she says.

The Human Trafficking Institute, which also works in Belize, trains law enforcement professionals in the specialized work of investigating and prosecuting human traffickers, including finding the perpetrators, developing search warrants and working with victims.

The institute advocates a model its founders helped develop and implement at the Department of Justice to improve the U.S. federal response to prosecuting traffickers. In a pilot project, six U.S. districts saw the number of human traffickers charged increase by 114%, while the remaining 88 districts saw only a 12% increase.

One recent sign of progress: Even with the borders closed due to COVID-19, Ugandan law enforcement officers and prosecutors have not given up the fight against trafficking; rather, they have doubled down on efforts to combat domestic trafficking, the effects of which are just as detrimental as international trafficking.

Before joining the Human Trafficking Institute, Currier Wheeler was an attorney at the United Nations High Commissioner for Refugees as part of the U.S. protection and resettlement unit in Washington, D.C. A graduate of The George Washington University Law School, she also worked for the refugee program at the nonprofit Human Rights Watch, advocated on behalf of forcibly displaced women with International Justice Mission in Uganda, and represented victims of human rights abuses before the International Criminal Court in The Hague.

2020-11-12
Previous Post: Police say they sent away homeless because of complaints
Next Post: DOJ concludes probe into Jeffrey Epstein’s plea deal in 2007