Once homeless herself, local woman starts ministry to help others 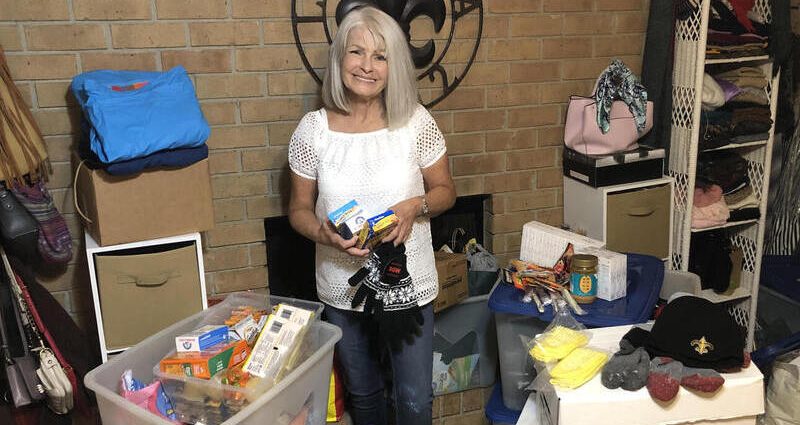 The mission of Janice Blocker’s Proverbs 14:31 Homeless Ministry is simple – to bring hope, comfort and the love of Christ to the homeless. But for Blocker, the mission is also personal.

“I was homeless off and on until I was 9 or 10,” she said, explaining her parents and siblings lived in a car for most of her childhood. “I recognized how mean people can be to the less fortunate … it’s terrible to be a little girl with matted hair and to be walking into a church looking for help … I still carry it … those are things that stick with people.”

Blocker moved to St. Charles Parish as an adult. Her time volunteering at St. Charles United Methodist Church led her to start a ministry focused on helping the homeless.

“I was volunteering at my church at the food pantry and at the time I seemed to be going into town and lot and would see the homeless underneath the freeways and the bridges,” she said of her trips to New Orleans. “My friend Erica and I made 35 or 40 bags … they didn’t have a whole lot in them at the time, but we would walk around and give them out. That’s how it started.”

What started then in 2017 has since grown into Blocker and others distributing approximately 75 bags four times a year to the homeless people of New Orleans through the ministry she founded – Proverbs 14:31 Homeless Ministry.

The name refers to Proverbs 14:31 in the Bible, which states “Whoever oppresses the poor shows contempt for their Maker, but whoever is kind to the needy honors God.”

Blocker said each of her outreaches has the goal of treating homeless people with respect.

Each bag Blocker distributes has about 20 items in it.

“Some of the top items needed are crew socks, gloves, mittens, hats and caps,” Blocker said. “Oh, and coffee mugs that they can get something warm in and drink on it for a while … insulated coffee mugs are really a necessity to the homeless during the winter months.”

The next outreach is planned for Dec. 4, and Blocker said she will start collecting and sorting items the second week of November.

“My community in Ormond in Destrehan is just an amazing and giving community,” she said. “They never disappoint. We’ve never gotten less than what we ask for.”

Blocker said she has partnered with local businesses for supply drives in the past, and there have been many people helping along the way.

“There’s one volunteer who has been with me since the beginning – Peyton Tunstall,” she said. “I don’t like to drive into the French Quarter, so he has been my driver and helper. If not for St. Charles United Methodist Church, Anytime Fitness Destrehan and Peyton Tunstall, I’m not sure I could have hung in there.”

“When I see people with nothing than what they have on their backs, that’s what keeps me going,” Blocker said. “It absolutely keeps me going.”