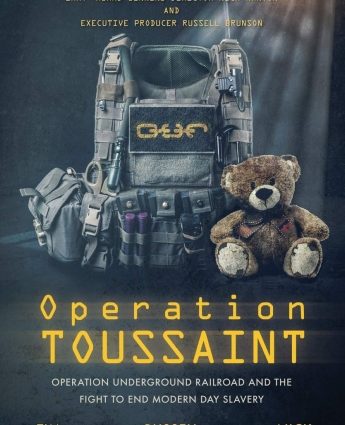 The human trafficking industry makes roughly $32 billion each year, according to Utah Attorney General Sean D. Reyes. The Polaris Project, the organization that handles the U.S. National Human Trafficking Hotline, reported a 40 percent increase in calls after many states initiated a shelter-in-place order.

There are organizations that help to fight against human trafficking; one of those is called Operation Underground Railroad.

Founder of Operation Underground Railroad Timothy Ballard grew up in California, earned numerous degrees from two different universities and worked as a Special Agent for the Department of Homeland Security for over 10 years, mainly spending his time working on the Internet Crimes Against Children Task Force.

After leaving the government in 2013, he founded the non-profit organization and has been fighting against human trafficking ever since.

“It was my pleasure to join Attorney General Reyes and share the work President Trump is doing to combat human trafficking,” O’Brien said. “We will continue to combat these heinous crimes.”

In late August of this year, Reyes led a coalition of state attorneys general in asking for the administration to fund and support The National Child ID Act.

The act would help fund kits for children K–6 who were abducted or ran away. Each kit costs $1.76 per child, and could protect 30 million children across America for just below 52 million dollars.

“Statistics show that more than 800,000 children go missing each year, including runaways and those abducted,” Reyes said. “That is one child gone every 40 seconds, and we are seeing those statistics rise along with child sexual abuse, exploitation and human trafficking.”

Ballard was also involved in the 2018 documentary film, “Operation Toussaint: Operation Underground Railroad and the Fight to End Modern Day Slavery,” in which Ballard and his special forces team go undercover in Haiti to bust a ring of sex traffickers.

The film begins in Salt Lake City with Reyes speaking to a conference about the issue and presenting Ballard before beginning preparations for the mission.

Human trafficking happens in every country and could happen to anyone.

Abby Torrice, education specialist and Students Against Trafficking coordinator at OUR, said that, before researching, she assumed that human trafficking rarely occurred in the U.S., and that it was exclusively an issue in “other” countries. When she discovered the truth she realized she needed to act.

Even though human trafficking shows no discrimination or preference toward victims, traffickers will be more likely to abduct those in compromised situations.

According to Torrice, homelessness, mental health problems and lack of family relationships are all factors that play into people looking more vulnerable; unsupported youth in the LGBTQ+ community also appear vulnerable.

Traffickers will often see their victim’s vulnerabilities as a weakness, which makes them easier to manipulate and control.

Torrice got involved in teaching students about this issue, not only because she was disturbed by how often human trafficking occurs, but because youth and young adults are at a higher risk.

“Students could get involved in their school club, but also assist a local anti-human trafficking task force in their community,” Torrice said. “This task force could then encourage other places in the community like after-school programs, hospitals, law enforcement, etc. to educate themselves on human trafficking and knowing the signs. It’s like a ripple effect.”

Although there is not currently a student club taking a stand against human trafficking at Weber State University, Torrice has been working on a Students Against Trafficking Club.

Torrice said that campus security and students need to be trained in the signs of human trafficking and how to report it.

For students, Torrice said if you or someone you know is meeting another person whom was met online, it’s always safest to meet in public. Additionally, if someone you met online begins showering you with gifts before meeting in person, it may be a sign of grooming.

“Oftentimes traffickers will disguise themselves as romantic partners to gain the victims’ trust before they begin to exploit the victim physically and sexually,” Torrice said. “The victims may not even realize they are being psychologically groomed or manipulated.”

For any who want to get involved in combating human trafficking locally or globally, the OUR organization’s website provides ideas and resources, from participating in events, to getting involved at school and to getting trained to work for the company.