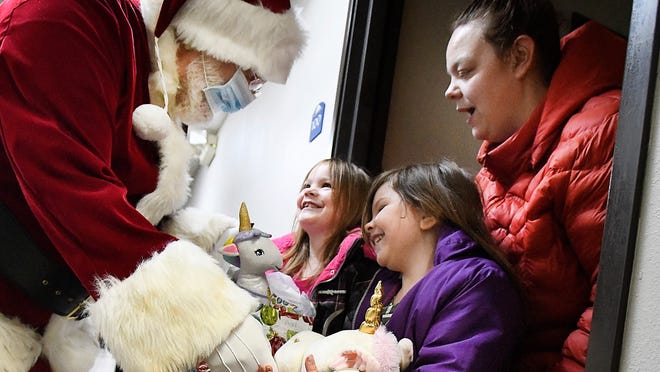 Samantha Kiger never imagined her daughters would not have presents under a tree to open at Christmas. But after the family member they were living with died of COVID-19, she and her girls have become homeless ahead of the holiday.

Now placed in a Roseville Microtel Inn, Krieger along with 7-year-old Heaven and 5-year-old Angel Trombley, are working to see the bright side.

“I haven’t been able to even buy a Christmas tree because I can’t afford it, so for me that part is sad for them,” Kiger said Friday as her girls received a gift delivery from Santa through the Macomb County Rotating Emergency Shelter Team’s Christmas event.

“Santa coming early was kind of almost a blessing because my five-year-old daughter didn’t even believe Santa existed until today.”

For members of the homeless community, the holiday season can be a challenge, but many organizations regularly step up to offer meals, gifts and gatherings for friends and loved ones, just like any family would host.

COVID-19 has thrown a wrench into these plans. Presents for children in homeless shelters will not be placed under a tree for them to grab freely at a party; instead they will be packaged and delivered. Support organizations that would host large holiday parties are either holding multiple smaller gatherings to accommodate a 10-person limit or skipping them entirely.

Attendees will still get a holiday meal from a partner church, but the food will be pre-packaged, and every family or person will have to get them from the front desk at check-in.

It gets the job done, but it’s not the same, she said.

“I’m a little depressed because normally we do it really big at Christmas time and we can’t right now,” Fidler said.

Monday marks the 30th annual National Homeless Persons’ Memorial Day, which takes place on December 21 — the longest and often one of the coldest days of the year. For those serving the homeless, this time of year is an opportunity to keep them fed and warm and let them know they are valued.

Every year before Christmas, more than 150 members of Detroit’s homeless community gather at the Masonic Temple for a holiday celebration where they eat a hot meal, receive warm clothes and gifts and a chance to visit with friends they may not get to see at any other time of the year.

That’s where Aldwin Blacksheer would typically be at this time of year. But that was before the pandemic changed everything.

“Everyone goes down to the Masonic Temple because that’s the main thing, and I see some of my associates that I pass by on the streets who hold up signs and some who I only see around this time,” said the man who can usually be found on West Grand Boulevard between the John C. Lodge Freeway and Woodward Avenue. “But this year it is difficult because of corona, and it’s hard for us.”

Before the coronavirus hit, Nicole Carbagal’s annual Christmas Eve “Keep our Friends Warm” event outside the Masonic Temple would have been planned out by Thanksgiving. But the virus has given her pause this year.

Ultimately, Carbagal decided a few days ago to continue to the tradition, but she is discouraging volunteers to help because she doesn’t want anyone to get sick.

“With everything going on, there’s just so much involved with keeping everybody safe. The social distancing and preparing food… I don’t want to be responsible or have anybody get sick at something that I put together,” she said. “If someone were to come through there and eat a meal that I prepared or something and got sick, that would be horrible.”

The event will not have hot meals this year as it has had in the past and instead will  provide bag lunches and gift cards. In lieu of one big table, there will be multiple tables sectioned off with caution tape, that will have brand new blankets, pairs of socks and underwear, shoes, coats, hats, gloves, scarves and toiletry bags on them. Carbagal said she has even reached out to Mayor Mike Duggan’s office to make sure the set up is acceptable.

Carbagal knows she may not see all the familiar faces who attended the event in the past, but she has a plan for that, too: She’ll take whatever items she has left over to the different spots around the city where they congregate and hand deliver them.

Although organizations are still finding a way to meet the needs of the homeless community, “the ambiance of the holidays won’t be felt this year,” said Dr. Chad Audi, Director of the Detroit Rescue Mission Ministries.

In a typical year, DRMM would host a holiday party at an area banquet hall with about 400 guests complete with food, gifts, dancing and plenty of hugs. This year, Audi said no holiday party will take place, but they are doing a contactless delivery for children to receive their Christmas gifts.

Vehicles will form a line in front of the offices at 138 Stimson in Detroit and someone will place the gifts in the trunk. The event took place Friday and will continue from 9:30 a.m.-1 p.m. Monday. The traditional holiday dinner will be spaced out across five of the shelters and soup kitchens, limited to 10 people at a time, Monday-Friday between 4-6 p.m.

Before, it was “a place where they would come and meet up, grab a meal and pick up whatever they wanted and we don’t ask them one question,” said Audi.

This time, in an effort to track any potential virus spread, the protocol will include signing in and waiting in a line. Even though it may alienate some of those they serve, when it came down to keeping folks happy and risking their lives or breaking the tradition but keeping them safe, they chose to keep things safe, he said.

“There will be no hugging, no dancing, no music, no arts and crafts, no Santa, or no eating together,” Audi said. “Folks will have to come get their meal and leave and the ones who are really homeless that I refer to as the ‘hot case homeless’ will probably not attend because they don’t like coming to these shelters, because they feel judged.”

“One guy I know for sure won’t be attending and he comes every year,” said Audi. “So those holiday events were very good for them to come in and us to see them and try to work with them at their own convenience.”

Even though it may cost him his usual meal and Christmas cheer, Blacksheer, who credits bad choices as to what left him on the streets over 10 years ago, said he supports that organizations have chosen to be safe.

“It’s not easy this year, but we gotta get past this,” he said. “And I chose to put my trust in God knowing this too shall pass.”