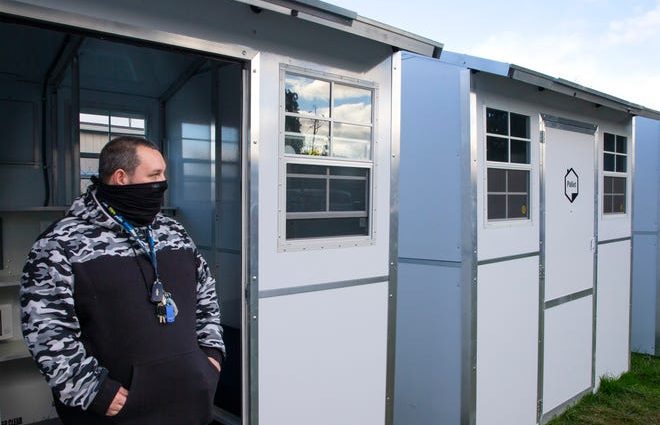 Rest is almost always one of the doctor’s orders to newly discharged patients, but that can be a challenge for those with nowhere to go.

Through a collaboration with St. Vincent de Paul, PeaceHealth gave a $74,000 grant to ensure patients experiencing homelessness have a place to recover after leaving their hospitals and emergency rooms. The grant covers the cost of construction, staffing and operation of five small structures nearby the The Hub, a St. Vincent de Paul clinic providing basic physical and mental health care with the help of Willamette Family, Inc.

“Many of our patients, after they get discharged … need a place to recoup,” said Todd Salnas, chief operating officer of the PeaceHealth Oregon network. “They’re going back to where they were before they walked into the hospital; it’s impossible for them to fully have a chance to recover.”

Salnas said the temporary stay option gives patients a chance to recover their “baseline health.” PeaceHealth helps coordinate transportation to the shelters, as well as medication and follow-up appointments.

How long a guest stays depends on how long they need for recovery, but the general goal is to have patients stay fewer than five days, making room for the next person in need. Salnas estimates local PeaceHealth locations discharge around five homeless patients a day. Last month, officials recorded at least 3,360 people experiencing homelessness in Lane County.

After a patient’s stay, St. Vincent de Paul staff work with patients to move them into one of their shelter programs, if they’re interested.

So far, 11 patients have stayed in the PeaceHealth Pallet shelters.

Previously, some discharged homeless patients would be referred to St. Vincent de Paul’s Dawn to Dawn site, a low-barrier shelter that had a capacity of 256 people. Now, in order to provide adequate COVID-19 spacing, it can only hold 125 people and often has a waitlist.

“They didn’t have any other place to send them,” said Terry McDonald, executive director of St. Vincent de Paul. “It’s was hard for PeaceHealth, and it was hard for us. Having an organized system where you can actually guarantee that there is a place for them that is actually set up for them … that’s huge improvement.”

The PeaceHealth funding covers a one-time cost of $9,920 for site preparation, electrical work, fencing and other construction costs. The operational costs total to about $64,000, which cover oversight staffing, utilities, garbage, an accessible toilet and a hand-washing station for three months. Around the end of April, 90 days of operating the Pallet shelters, PeaceHealth will consider whether to continue funding the endeavor.

“Providing supported housing options for the community is a long-term goal for us, so we will continue to provide support, financial and other, to housing-type programs,” Salnas said. “If (this project) hits many of our goals, we’ll definitely explore expanding that for a long-term commitment. We like to start with pilots just to make sure we get the results we want.”

While PeaceHealth funded the operation and construction of the five shelters, the structures themselves were paid for by the Lane County government. Months ago, the county purchased 120 shelters for $888,300, which was covered by funding from the federal CARES Act. Pallet shelters have since been popping up all around the county.

More:‘Pallets’ pop up around Lane County to shelter homeless people

The shelters feature rigid aluminum and composite panel construction, designed for assembly with “LEGO-like simplicity” in less than an hour each, according to the product’s website, palletshelter.com. The 64-square-foot single shelter has lockable doors and windows, electricity, built-in lighting, and heating and ventilation designed to keep the interiors 72 degrees.

St. Vincent de Paul operates 20 other county-provided Pallet shelters at its Dawn to Dawn site where they serve as a transition between the group shelter and a proper home for working residents.

Isaac Johnson, 34, said he’s had more privacy since moving in to a Pallet shelter from the Dawn to Dawn tent.

“You get to feel that next step of moving forward and that’s important,” Johnson said.

But living in the Pallet shelters can be lonely, he added. The space is small and Johnson can’t have guests.

“It isn’t a real home, so it’s a good design because you want to stay not too comfortable,” Johnson said. “But I like it.”

There are more Pallet shelters located around Lane County at the Eugene Mission, in Florence, in Cottage Grove, in Veneta and in Oakridge.