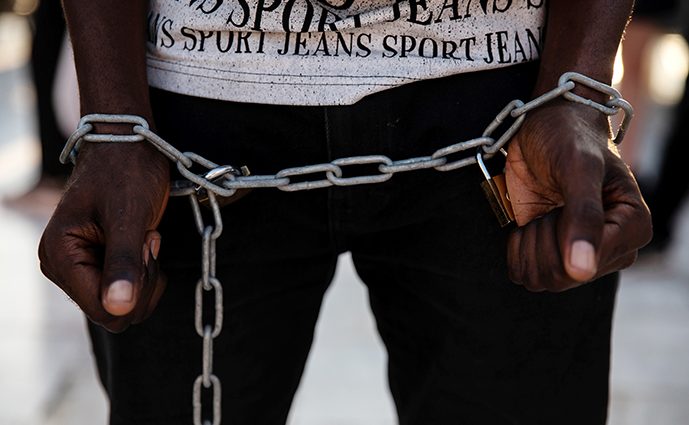 Many of the interactions that used to take place in person have moved online over the past several years, a trend that has only accelerated with the COVID-19 pandemic.

Emmaus Ministries, a Christian non-profit that helps men and boys who are survivors of sex trafficking and commercial sexual exploitation, is no exception. The ministry was founded by Deacon John Green in 1990.

While staff and volunteers still approach men who appear to be soliciting sex on the street, the group is pivoting to contacting male victims of sex trafficking via cell phone, said Jonn Blazey, Emmaus’ director of partnerships. That’s in response not only to the pandemic but to the way sex trafficking has moved online in the last decade.

Emmaus has been piloting software that finds male prostitutes’ contact information online so that staff or volunteers can make contact without having to go to pornographic websites themselves.

“We send guys a text that says, ‘Hey, we’re here to help,’” Blazey said. Many, maybe most, won’t respond immediately, but the text connection allows them to reach out later.

At the same time, Blazey said, Emmaus is working to build awareness of the prevalence of male sex trafficking and sexual exploitation among other social service providers and government agencies.

“We are helping people in need,” Blazey said. “Fifteen years ago, 30 years ago, people didn’t see male or male-identifying victims of sex trafficking. We fight a cultural narrative that says women are weak and they are victims and men are strong and they are perpetrators.”

Blazey said Emmaus staff and volunteers have always worked on meeting men where they are and offering what they need, whether it’s a hot meal or a place to do laundry, and the ability to connect them to other resources. They try to build those connections into relationships and demonstrate their belief in the dignity of the men they serve.

Men who are trying to leave that life behind often have no permanent address, no high school diploma, maybe no identification documents. Many have criminal records.

“We can help them through the application process to get an ID, connect them with online classes to get a GED, and we work with a law firm who does pro bono work to help them try to get an expungement,” Blazey said. “Then we work with them on the trauma so they can work effectively through that trauma.”

Attorney Michael Philippi connected Emmaus with his firm, Nixon Peabody, a few years ago. He was drawn toward Emmaus precisely because there was so little help for the men Emmaus ministers to.

Philippi started by making a donation, then got in contact with the staff, who invited him to visit the ministry center.

“I got to meet some of the clients,” Philippi said. “They were great guys, and they were really society’s forgotten. They were so forgotten that nobody believed they existed.”

He had to persuade some of his partners at Nixon Peabody that some of the statistics he brought them about the number of men and boys who are sexually trafficked were true, he said. Once he did, the firm began doing some pro bono work for Emmaus and the men it helps.

“They turn about 20 and they age out” and they have nowhere to turn, Philippi said. “They’re today’s lepers. I’m no Father Damien, but if you want to do something for someone that no one is doing something for, that’s the place.”

Blazey said Emmaus offers help to men regardless of their religious beliefs or lack thereof.

“It’s not that mindset, that once you believe what I believe, then I’ll serve you,” Blazey said. “No. Christ first served us. That’s what we want to strive for, to be like Christ. Our core is serving God’s image-bearers. Our deep belief is that nobody is supposed to be exploited.”

The COVID-19 pandemic meant shifting Emmaus’ Albany Park ministry center from being open to drop-ins to being available by appointment only, especially since many of the men it serves are immunocompromised. Staff and volunteers also started working with more men by phone, or traveling to meet them in the neighborhoods where they live.

It has also started offering more one-on-one as opposed to group therapy, Blazey said, which has proved helpful.

The downside has been a reduction in the number of people Emmaus has been able to serve, Blazey said. Most years, the organization provides some kind of service to about 300 men; this year, it has been about 150.

“A lot of folks do come here,” Blazey said. “For every person who comes in, we sanitize before and after. But it’s much easier to open the doors and cook big pots of food at the same time.”

Blazey said he is also concerned about the number of children who are now home and online, sometimes without supervision.

“There are a larger number of people who are demographically much younger than they were before hustling on the streets,” he said. “Economic impact hits the poorer neighborhoods first. It really has made a vulnerable population much more vulnerable.”

2020-11-01
Previous Post: Nyanga mom accused of trafficking daughter (13) for sex seeks bail in court
Next Post: Get Hungry for These Underwater Food Stories