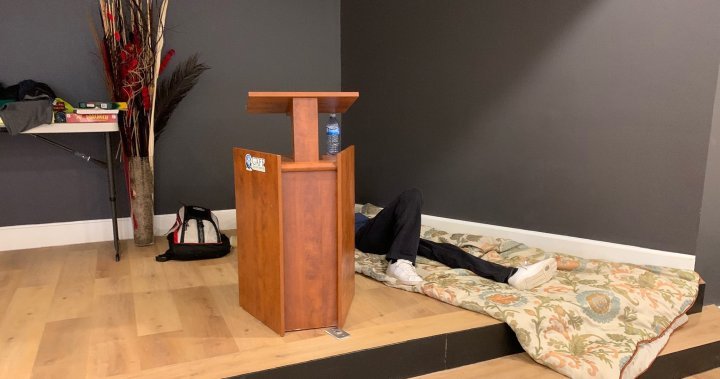 The Phoenix Learning Centre in Fredericton opened its doors on Oct. 9 and local advocates say it’s already making a difference to the community.

In New Brunswick, the COVID-19 pandemic has limited where homeless people can find warm and safe shelter.

“It’s way different,” said Fredericton resident Joni Chiovers. “You can’t even go sit in the library; I used to go sit there all the time. You can’t sit out in front of Tim Hortons anymore, they don’t want you doing that.”

The new centre aimed to provide a safe place to go.

“We have a place where people can come in, feel safe, get warm, have a snack, have a chat. If they have some issues, we can help them get through it,” said Scott Earle, the Phoenix Learning Centre coordinator.

1:44COVID-19 brings challenges for shelters trying to prevent homeless ‘freezing to death in the snow’

The centre is a pilot program funded by the Canadian Medical Association and the City of Fredericton. It is also an extension of addiction treatment facility Riverstone Recovery Centre.

Earle says with just over two weeks since its opening, the centre has already impacted the local community.

“When I can come in here in the mornings or the afternoons and there’s a smile on people’s faces, you know they are relaxed. When you can see a vulnerable person fall asleep in front of you it gives you a feeling like no other,” Earle said.

Emma Buchanan, the centre’s community outreach support worker, says the centre is lucky to have showers available for those in need.

“People are so happy to be able to come in and have a nice warm shower before they go back to wherever they are going to sleep,” Buchanan said.

Chiovers said he started going to the centre the first day it opened.

The cold weather is quickly approaching in Fredericton, and the centre has a limited capacity due to COVID-19.

Only 30 people at a time can be in the centre, but Earle says that’s not enough. “We really need something for about 65, 75 people,” he said.

Earle said the centre is in need of donations, not just of money but coffee, snacks and socks too.

Phoenix staff have a goal of adding educational programs to the centre.

“We want to have GED stuff happening soon or high school diplomas because some people may not have that, or addition services if that’s what people are in need of,” said Buchanan.

The centre is open from 9 a.m. to 5 p.m., but staff say they hope to extend the hours so they stay open until overnight shelters start accepting people for the night.

Earle said he is hoping to have the centre running 12 hours a day, seven days a week, to fill that gap.

Chiovers is hoping for the same.

“It’s very important to all of us that that this is open, because a lot of us just can’t take the cold,” Chiovers said.