Protesters Gather In Opposition To Clearing Of Manchester Homeless Encampment 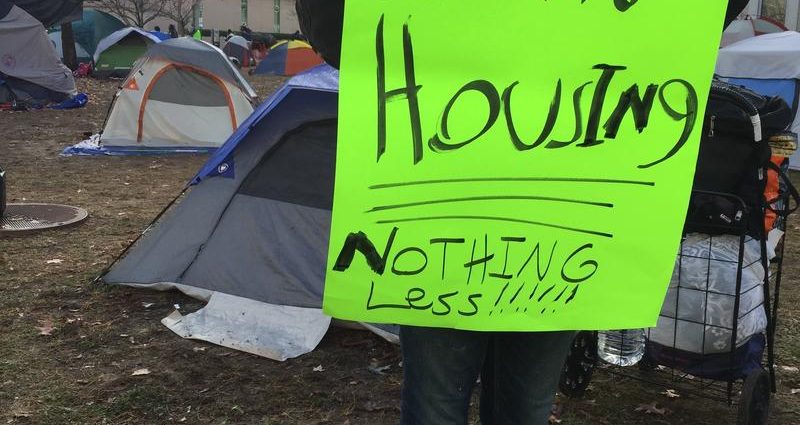 On the day state officials are scheduled to clear out a homeless encampment in Manchester, a group of protestors turned out in support of people experiencing homelessness who for months have stayed on the lawn of the Hillsborough County Superior Courthouse.

Signs posted by the state order the camps’ inhabitants to leave the courthouse grounds by today, or else face legal action under a ‘no camping’ statute. The state has contracted with a private cleaning crew to sweep the area early Tuesday morning.

Get NHPR’s reporting in your inbox – sign up for our newsletters today.

While some inhabitants appear to have vacated the encampment over the weekend, there were more than two dozen tents still in place as the deadline arrived.

With shelters at capacity, the camps’ remaining residents say they have no alternatives.

“They keep running us away from the city, so where are we going to go?,” asked Calvin Atwood, who has been staying in a tent on the courthouse grounds for months. “Can someone tell me where can my people go?”

A few dozen protestors converged on the courthouse Monday morning, calling for a delay in the state’s enforcement actions.

Some carried signs reading “We Demand Housing, Nothing Less” while others sang Woody Guthrie’s This Land Is Your Land as traffic on Chestnut Street often slowed to take in the scene.

The encampment near the city’s main commercial strip grew in size this summer, garnering attention and finger pointing as local and state officials sparred over the correct course of action.

Manchester has a city ordinance and curfews in place that restrict houseless individuals from staying overnight in most parks. The courthouse, however, is technically state property, where those rules don’t apply.

A 40-year old state law does prohibit camping on public property unless permission is given by a local municipality or governing body.