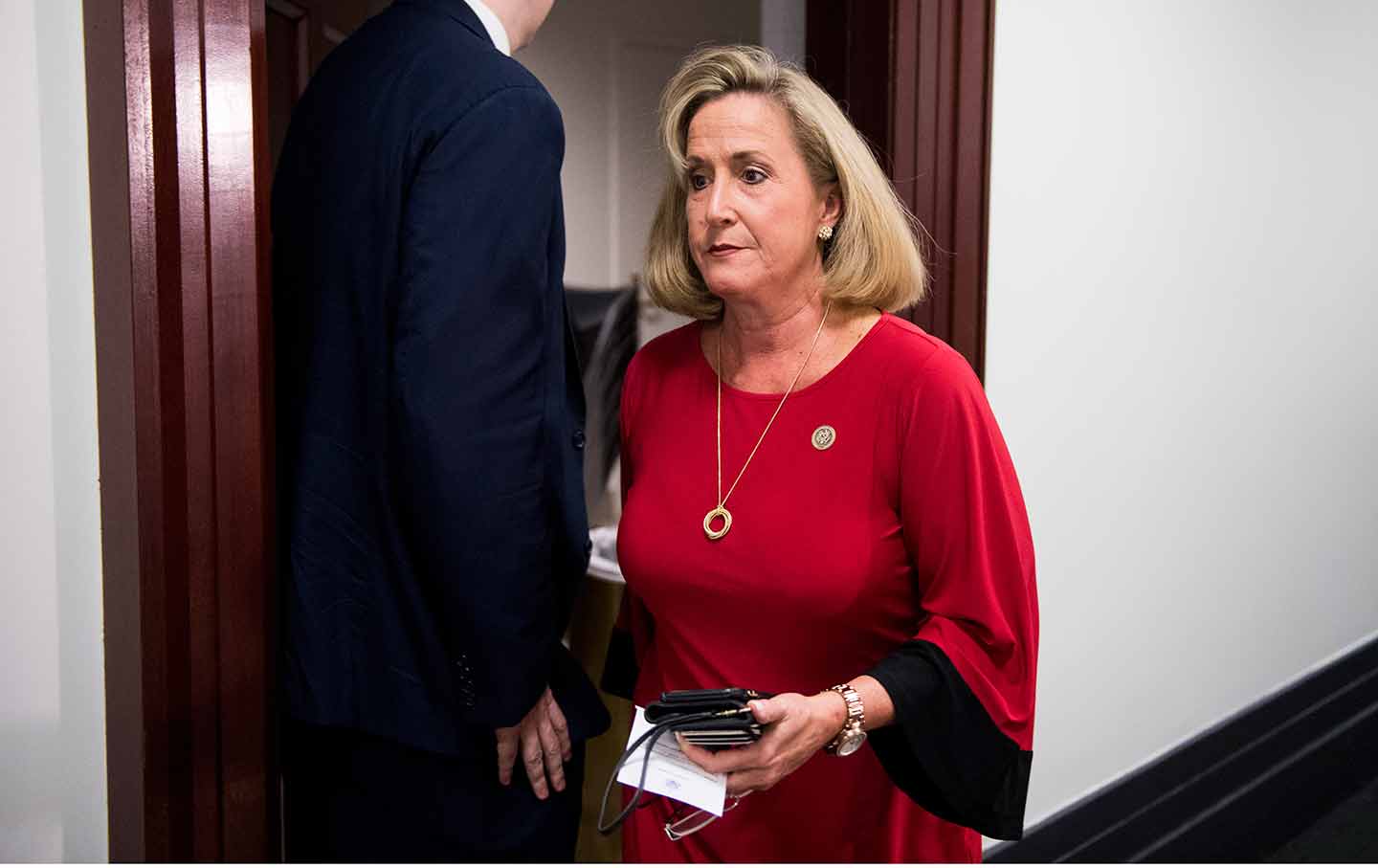 Rep. Ann Wagner of Missouri has not embraced QAnon, but is claiming that her Democratic opponent has displayed “a disturbing pattern of putting sex offenders over our safety.” (Bill Clark / CQ Roll Call via AP Images)

Thank you for signing up. For more from The Nation, check out our latest issue.

The Nation is reader supported: Chip in $10 or more to help us continue to write about the issues that matter.

Thank you for signing up. For more from The Nation, check out our latest issue.

Travel With The Nation

Be the first to hear about Nation Travels destinations, and explore the world with kindred spirits.

Did you know you can support The Nation by drinking wine?

QAnon may be losing some of its online platforms—but the conspiracy theory is increasingly being enabled by the Republican Party.

This week, TikTok became the latest app to clamp down on QAnon, announcing a ban on content and accounts that promote the conspiracy theory. QAnon, which began in 2017 with an anonymous post on the internet forum 4Chan by someone identifying themselves as “Q” and claiming to have a high-level government security clearance, revolves around the delusion that Democratic Party operatives, Hollywood stars, and members of the “deep state” are running a satanic child trafficking ring, and that President Trump is working to stop them. The ranks of QAnon adherents have grown remarkably this year, spreading misinformation online and inspiring real-world violence. TikTok’s action follows similar attempts by YouTube, Facebook, and Twitter to slow the spread of Q-related disinformation.

But QAnon has already morphed from an online community of amateur detectives to a budding political movement, encompassing a mess of other conspiracist beliefs. Interest in QAnon has ballooned since the beginning of the pandemic and related economic shutdowns when, suddenly, many people had nowhere to go but the Internet. Between March and July membership in ten large QAnon Facebook groups grew by nearly 600 percent. During the same time period, according to a Pew survey, the number of Americans who had heard or read “a lot or a little” about QAnon doubled from 23 percent to 47 percent; 41 percent of Republicans who had heard about QAnon said they thought it was “somewhat” or “very good” for the country. According to another recent poll, a majority of Republicans believe the conspiracy theory about “deep state elites” is at least partly true.

More than two-dozen candidates who have endorsed QAnon or promoted QAnon content are vying for seats in Congress, according to Media Matters, almost all of them Republicans. Not all of these candidates are serious contenders. In Oregon, for instance, Jo Rae Perkins, who shared a video of a QAnon-related meme in which she took an oath to be “digital soldier,” is sure to lose her bid for Jeff Merkley’s Senate seat. But at least one of these candidates is all but sure to win: Marjorie Taylor Greene, running in Georgia’s 14th Congressional District.  “There’s a once-in-a-lifetime opportunity to take this global cabal of Satan-worshiping pedophiles out, and I think we have the president to do it,” Greene said in a 2017 video, uploaded to YouTube this summer.

Misinformation about a vast child trafficking network has spread far beyond the bounds of explicit QAnon communities, circulating among Instagram influencers, yogis, and anti-vaxxers, often without explicit reference to Q. The fixation on pedophilia has also seeped into political campaigns even where candidates don’t openly support the conspiracy theory. In September, the National Republican Congressional Committee (NRCC) spent $250,000 on an attack ad against Democratic Rep. Tom Malinowski, who represents a swing district in New Jersey, that opened with an ominous warning: “In every city, in every neighborhood, around every corner, sex offenders are living among us,” a narrator says. The ad goes on to claim that Malinowski “tried to make it easier for predators to hide in the shadows” and “chose sex offenders over your family.” The ad says Malinowski “worked as the top lobbyist for a radical group that strongly opposed the National Sex Offender Registry,” referring to Human Rights Watch, where Malinowski was Washington director before serving as assistant secretary of state for democracy and human rights during President Obama’s second term. In reality, neither Malinowski nor HRW opposed the existence of the registry. The deceptive thread that the NRCC is pulling on is a letter written 14 years ago by one of Malinowski’s then-colleagues at HRW raising concerns with a crime bill that, among other things, required people convicted of sex crimes to remain on the sex offender registry for the rest of their lives, long after completing their criminal sentence.

Malinowski has described the ad as an effort by the Republican Party to “align their message with the paranoia that QAnon is promoting,” without directly endorsing the conspiracy theory. Malinowski was one of the co-authors of a House resolution condemning QAnon, which 17 Republicans and one Independent voted against. In September, Malinowski received death threats after “Q” posted information about him on a message board, including an NRCC press release which, similar to the attack ad, falsely claimed that he “lobbied to protect sexual predators.”

Similar attacks have come up in other congressional races. In a suburban district in St Louis, Missouri, Republican representative Ann Wagner accused her challenger, Jill Schupp, of displaying “a disturbing pattern of putting sex offenders over our safety.” In Florida’s 16th congressional district, the NRCC attacked the Democratic candidate, state senator Margaret Good, for voting against a 2019 ban on child-like sex dolls. (Good said it was an accident.) In Michigan, the NRCC has described Democratic candidate Jon Hoadley as a “pedo sex poet” based upon a twisted and out-of-context interpretation of a satirical 2004 blog post.

Republicans in state-level races are also deploying QAnon-style messaging. In Oregon, Republican state representative Cheri Helt aired a TV ad and sent mailers accusing her opponent, a local prosecutor named Jason Kropf, of “fail[ing] to protect victims of human trafficking.” The ads don’t present any actual evidence of such a failure on Kropf’s part, but rather refer to comments made last year by his boss, Deschutes County District Attorney John Hummel, who described trafficking as “not happening” in the area. Helt has rejected the comparison between her campaign ads and QAnon, describing the conspiracy theory as “a bizarre fantasy.”

Sex abuse conspiracies aren’t new, and these political campaigns aren’t the first to weaponize trafficking or “soft on crime” messaging. Still, it’s notable that Republican campaigns are going to such great, tortured lengths to tie Democrats to trafficking this year. QAnon leveraged the visceral horror of child sex abuse to reach new followers, to the extent that some of the people parroting QAnon talking points about trafficking don’t necessarily think of themselves as subscribers to the conspiracy theory. The GOP, in turn, is winking and nodding at this new, active constituency, while trying to maintain some plausible deniability. QAnon’s online infrastructure—its YouTube channels, Facebook groups, and hashtags—can be useful to Republicans, even as they try to sidestep the movement’s most unsavory aspects.

Trump, for his part, is barely even trying to sidestep. Last week, in an interview with NBC’s Savanah Guthrie, he refused to disavow QAnon, claiming to know nothing about it. Then he offered this information, giving the movement a rosy gloss: “I do know they are very much against pedophilia. They fight it very hard,” said Trump, who has been credibly accused of sexual assault by at least 25 women. At the Republican National Convention in August, Trump boasted of “[taking] down human traffickers who prey on women and children.” Later that month media reported that a joint effort by federal, state and local law enforcement agencies had broken up a massive child trafficking ring in Georgia, an intervention that conservatives and Q-linked accounts credited to Trump. However, an investigation by the Atlanta Journal-Constitution revealed that the operation involved several unrelated cases of missing children, only some of them related to trafficking or sex crimes, and that federal authorities created a “false perception” of having busted a major criminal enterprise. On October 20, the Department of Homeland Security announced the creation of a Center for Countering Human Trafficking.

It’s hard to say how much misinformation about child trafficking will affect the outcome of individual races in a political landscape already largely defined as a referendum on Trump. QAnon has been spreading quickly among evangelical Christians, a constituency loyal to the president. But the movement’s “soft front” focus on child abuse (the vast majority of which actually occurs within a home or family, rather than as a result of trafficking) has also helped it find a foothold with white and suburban women, who were a crucial voting bloc for Trump in 2016. Moms’ groups on Facebook have amplified QAnon messaging, as have health and wellness communities and Instagram influencers. Polls suggest that white women’s support for Trump is eroding, but it’s possible that for at least some of these voters misinformation about trafficking could be “gateway drug,” as Slate suggests, to Trump support. Spanish-speaking voters in Florida and other critical swing states are also being bombarded with conspiratorial misinformation on Facebook and WhatsApp, and from radio radio stations and websites created to look like news outlets. “It’s difficult to measure the effect exactly, but the polling sort of shows it and in focus groups it shows up, with people deeply questioning the Democrats, and referring to the ‘deep state’ in particular,” Eduardo Gamarra, a pollster and director of the Latino Public Opinion Forum at Florida International University told Politico.

Beyond its influence in individual campaigns, QAnon is contributing to a broader conspiratorial din surrounding the election. Trump has already warned that the election is “rigged” and might be “stolen” from him. Misinformation about voter fraud and mail-in ballots is rampant. All of this is converging in a meta-narrative of a deep-state coup—a story that, if not explicitly embraced by Republican leaders, might still be useful to them in the event of a contested election.