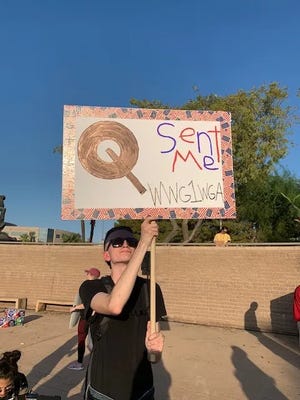 PHOENIX – On a sweltering August day, hundreds of people gathered in a concrete plaza near the Arizona Capitol united by the seemingly noble cause of wanting to “Save the Children.”

Though, scattered in the crowd were signs reading “Q Sent Me” and “WWG1WGA” and paper cutouts of Jeffrey Epstein and Hillary and Bill Clinton that showed other motives for their activism: adherence to the belief that child sex trafficking is the work of a global cabal of pedophiles.

“We as a people have all been blinded and lied to by the mainstream media, so we need to start keeping an open mind and searching within ourselves to better understand everything going on in the world,” said 21-year-old Lucas Howard, who held a sign that indicated he was a follower of the QAnon conspiracy.

Anti-trafficking advocates who have worked for years to get people to talk about the topic have over the past year seen it become widely discussed on social media and the subject of in-person rallies. The one in August in Phoenix was part of a string of #SaveTheChildren rallies nationwide.

But the newfound passion for the topic is fueled by false information spread under the QAnon umbrella.

And as more Q followers remain captivated by unfounded tales of a global cabal ensnaring children to be raped and eaten, longtime anti-trafficking advocates fear there will be less concern and support to combat the all-too-real issue of women and girls being forced into sex trafficking or prostitution.

QAnon:Here’s what to know about the far-right conspiracy theory

‘Their whole point is to affect the election’

The subject came up in the September meeting of Arizona Gov. Doug Ducey’s Arizona Human Trafficking Council, which is co-chaired by Cindy McCain, the widow of U.S. Sen. John McCain. Cindy McCain has worked for years to raise concerns about sex trafficking in Arizona and across the country.

“It’s despicable, in my opinion,” Cindy McCain said during that meeting, upset by how QAnon and the #SaveOurChildren movements have seemingly hijacked the issue. “It’s very frustrating for all of us that participate in this.”

McCain said during the meeting that she and Sen. McCain were recently accused by some QAnon followers of being traffickers. “I had to remind QAnon my husband had been dead for two years,” she said.

At the meeting, members of the council discussed ideas to combat the misinformation, a public awareness campaign posting videos on social media of women who were trafficked, discussing the reality of the problem to counter the myth.

McCain, though, said she thought the problem might be diminished by November.

“Their whole point is to affect the election,” she said. “It’s the lowest common denominator. But that’s exactly what’s going on and they’re doing it on the backs of trafficked children.

Trump, during a town hall event on Thursday, refused to denounce the QAnon conspiracy. “I do know they are very much against pedophilia. They fight it very hard,” he said. “But I know nothing about it.”

Organizer of Phoenix rally: ‘We are not conspiracy theorists’

Adel Belgaied, who organized the rally in August, said he saw himself pursuing the same goals as McCain and the governor’s task force. All want to save children from trafficking, he said.

Belgaied, a self-described entrepreneur who runs a marketing company, said he became interested in the sex trafficking issue four years ago after hearing sordid tales from “powerful families” he wouldn’t name.

Belgaied said that even if people are sharing false theories, they are helping prevent child sex trafficking. “Anybody fighting it is doing the right thing,” he said. “If you say two words, you’re doing something.”

He said he did not want to be cast as a conspiracist, but he does think powerful entities — including cartels and Russian mafia members — are involved in a global network for trafficking children.

The central conceit of the baseless QAnon conspiracy is that a global cabal of leaders and celebrities are involved in an operation trafficking children to be raped and sometimes eaten.

Adherents believe that an anonymous person with Q-level security clearance has been dropping cryptic clues about the nefarious plot in various online message boards. One central point of agreement, though one lacking in any evidence, is that President Donald Trump has been investigating, and mass arrests – discussed as a “storm” or a “great awakening” – are imminent.

It began with a post from anonymous user “Q Clearance Patriot” on the message board 4chan in 2017. It didn’t become “mainstream” until summer 2018, when supporters began showing up at Trump rallies with “Q” shirts, hats and signs, said Kathryn Olmsted, a professor of history at the University of California, Davis.

In 2019, the FBI designated QAnon as a domestic-terrorism threat, saying the group is filled with “conspiracy theory-driven domestic extremists.”

The reason for the theory’s rise is it empowers believers to feel like they’re part of a historic fight between good and evil, said Olmsted, author of “Real Enemies: Conspiracy Theories and American Democracy, World War I to 9/11.”

“Q supporters feel they are on the side of good and the other side is completely evil — it is satanic, it is preying on children,” she said. “It’s not just a pose to them on health care or taxes or regulations or something like that — it is the very embodiment of evil. It empowers them to think that they’re part of a historical struggle.”

More:How QAnon and other dark forces are radicalizing Americans as the COVID-19 pandemic rages and election looms

‘Draw people back to the facts’

People who see themselves as part of that struggle have led to a surge of new volunteers at ALWAYS Arizona, a center that provides legal aid to human trafficking survivors and others.

January Contreras, CEO of the group, said the center saw as many as 10 volunteer inquiries a week, up from one or two. Though the center also works with foster kids and homeless youth, many would-be volunteers specifically mentioned trafficking, leading her to believe the surge in interest came from QAnon-linked rallies.

“I think people were seeing so many different stories about human trafficking that they didn’t quite know what to believe, so they came to us to get involved,” Contreras said. “But it’s not just about training volunteers anymore. We now have this new responsibility to myth-bust like never before.”

Southern Arizona Against Slavery, located in Tucson, has posted “Myth vs. Fact” articles on its Facebook page to combat falsehoods with the truth about the sex-trafficking problem, said the group’s vice president Sarah Herndon.

An example: A common myth, often perpetrated by QAnon supporters, is that trafficked victims are abducted or kidnapped. The reality, according to the group, is that most trafficked women and girls are coerced into selling sex for money by romantic partners or family members.

“Our goal is to always draw people back to the facts,” Herndon said.

But such work is time-consuming, Herndon said, sometimes taking more than a week. She said that consumes time that should be spent on the group’s primary education efforts.

“It derails the real work that is going on,” she said. “But we have to do it because we need to make sure we’re focusing on factual information rather than scandalous material.”

The reality of sex trafficking, longtime victim advocates say, is based on police reports and the accounts of women who have escaped being sold for sex.

It shows vulnerable women and girls often coming from the foster care system or runaways from abusive parents being preyed upon by people who lure them into performing sexual acts for money. Advocates say those lured into sex trafficking can become addicted to drugs to dull their senses and could become victims of violence should they attempt to flee the person controlling them.

Polaris, a national anti-trafficking organization, posted on its website that the misinformation spread by QAnon could clog hotlines devoted to stopping trafficking, keeping actual victims from getting through, or preventing people from reporting valid information.

Polaris, on its website, wrote that QAnon misleads people into believing that the solutions and causes of “child sex trafficking have to do with politics, or entirely with law enforcement, when the reality is far different.”

‘Everybody is drowning in conspiracy’

Arizona has seen attention devoted to tales of trafficking that were at best unverified and worst patently false.

In July, multiple social media posts accused online retailer Wayfair of selling high-priced furniture that included children. Maddie Thompson of Gilbert, a social media influencer who had 17,000 followers on Instagram, posted a video along with her husband trying to prove the theory was real by buying the products. Instagram removed the video days later. Thompson, as of Thursday, has 43,000 followers

In fall 2019, citizen advocates testified in front of several Arizona boards, including the human trafficking council co-chaired by Cindy McCain. Their charge: the state’s child-protection agency was intentionally taking children in order to funnel them to traffickers.

Following months of testimony from the grassroots DCS Oversight Group accusing the state of being officially involved in trafficking, the council ended public comment at its meetings.

State Sen. David Farnsworth held hearings at the Capitol with members of the DCS Oversight Group, bringing an official imprimatur to their beliefs.

Farnsworth said while he has no evidence, he believes rogue state workers might knowingly funnel children to sexual predators.

At the governor’s sex trafficking council meeting, Samantha Calvin, who teaches a class on recognizing signs of trafficking to nursing students at Arizona State University, said she feared that hotlines for reporting sex trafficking would be clogged with calls from people reporting false information, possibly preventing actual victims from reaching help.

Olmsted, the California professor and conspiracy expert, agreed that the spread of misinformation can lead to a dangerous misallocation of resources.

“The irony of their cause is that when it comes down to it, it’s Q supporters who are allowing more child trafficking to happen,” she said.

, a culmination of a years-long struggle of advocates to reframe an issue that had been called prostitution and seen as a nuisance and crime of vice. Backed by powerful figures such as Cindy McCain, law enforcement was trained to see the issue as one of domestic sex trafficking and the women involved not as criminals, but as victims that need rescuing.

Gina Jernukian, a tattoo artist who volunteers her time working with trafficking victims to remove branding marks put on their bodies by pimps, said the horror of the reality of the problem is enough, without adding in more conspiracies.

“They get onto something, it becomes a hashtag and such a conspiracy,” she said. “The underlying issues are not even talked about. Everybody is drowning in conspiracy.”

Election:Pentagon reiterates that troops have no role in US election – that includes vets at polls