Relocation efforts begin for over 20 homeless residents of Camp Rhonda

After providing aid to homeless people in South Dallas for four months, Ryan Ahmadian has seen a lot.

One incident he remembers clearly is when his friend’s tent was tossed over a barbed wire fence and the rest of his belongings were thrown away by city cleaning crews.

“When you’re homeless, all you have is your personal belongings,” said Ahmadian, who volunteers with Dallas Stops Evictions, an affordable housing advocacy group.

After his friend climbed the fence to retrieve what he could, Ahmadian helped him and a few other homeless people set up their tents in a vacant lot just south of Deep Ellum next to an Interstate 45 overpass.

Soon, what began as an encampment of three tents turned into almost 30. People familiar with the South Dallas community call it Camp Rhonda, named in memory of Rhonda Fenwick, who lived there for a month before dying of organ failure.

Johnny Aguinaga, the lot’s owner, said that he didn’t know about the handful of people who moved there in October, but once he found out, he let them stay if they kept the area clean.

Aguinaga, who has filed to run for City Council in District 4, received a code violation on Jan. 27 that said the lot couldn’t be “used for other purposes than its intended use.” The notice stated that an inspector would return on Saturday to ensure the space was cleared out. If tents were still there, the city could fine him up to $2,000 daily.

Since the notice, city staff have been “making every effort to strategically and compassionately case manage the residents of the encampment … while educating the property owner to bring the land into compliance with applicable zoning requirements,” according to an email from a city spokeswoman.

As of last Wednesday, the Office of Homeless Solutions has met with 23 residents of the camp to discuss placement needs, and 16 agreed to move into Hotel Miramar in Oak Cliff. Relocation efforts started for those individuals on Friday, and city staff are providing COVID-19 testing prior to taking them to the hotel.

Homeless Solutions staff will assign case managers to each guest, and their goal is to have everyone in stable housing within three weeks. 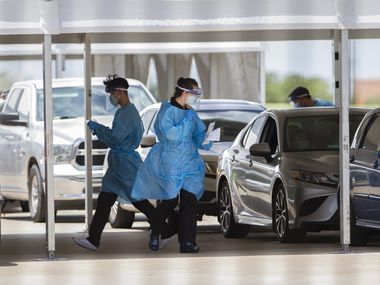 Despite efforts to place Camp Rhonda residents in brick and mortar buildings, homelessness advocates have criticized the city’s actions.

Those who don’t end up at Hotel Miramar will lose the stability of the encampment. And volunteers had been providing necessities to residents that they might not receive otherwise.

“What are they going to do after if they’ve already kicked them out from Camp Rhonda?” said Vanessa Wilmore, lead organizer at Feed the People Dallas Mutual Aid.

“Obviously the city has protocol and things they need to do, but when they strip away all of that and really just think about people, they could think about actual solutions.”

Homeless shelters provide temporary relief from the outside elements, but they’ve been harder to get into during the pandemic, both because of space restrictions and health regulations. Most shelters are requiring negative COVID-19 tests to enter.

“If you leave for a night, you have to go through the process again,” said Elisabeth Jordan, founder of The Human Impact, a nonprofit that provides care to homeless individuals.

“So, we’ve seen more people choose to be unsheltered during this time than normal.”

It’s also harder to keep families together. Men and women are typically separated, and many shelters aren’t pet friendly. Almost all shelters have a set time that people must be in for the night.

“There needs to be rules,” Ahmadian said. “But also, they’re doing it to the point where it’s inconvenient to the people that are living there and a burden on their lifestyle.”

Ahmadian and other advocates have emphasized that the bigger issue is a lack of affordable housing and the systemic issues that lead to homelessness.

“Getting off the streets is much harder to navigate during this pandemic,” Jordan said.

Jordan and staff at The Human Impact have taken laptops and hotspots to Camp Rhonda and other communities to help homeless individuals receive IDs or other services they might need. But systems and offices are slower than normal.

Last year, the Office of Homeless Solutions received about $500,000, and the water department got $250,000, to clean up encampments. Advocates have said that money should be dedicated to long-term solutions instead of sweeps.

“They’re not providing any serious solutions or alternatives to that,” Ahmadian said. “If they think [homelessness is] a problem, then fix the problem.”

2021-02-06
Previous Post: What you can do to help YSS homeless shelter brace for winter
Next Post: hungry give me food ?