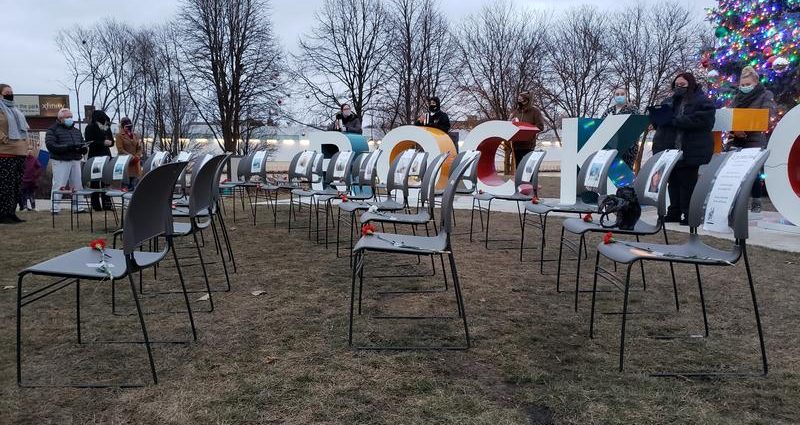 Each year on winter solstice, the Northern Illinois Homeless Coalition remembers the homeless men and women in the area who died during the year. Despite the pandemic, that was still true in 2020.

Passing cars blew their horns as 25 chairs stood empty at Rockford’s Davis Park. The chairs displayed pictures and names representing the 25 people who died. One of them passed in December of 2019 after the memorial.  Last year’s memorial number was 46.

Angie Walker is the homeless program coordinator for the City of Rockford’s Human Services Department. She explained what she believes is the reason for the decrease.

“Well, we hope it’s because we’re getting people housed and off the street. That’s our goal,” she said. “We don’t want people to be on the streets so that they can end up here at the end of the year.”

Walker mentioned that the pandemic didn’t hinder the work done by most agencies this year. She said her agency has worked extremely hard to keep Rockford homeless people safe and free of the coronavirus.

Walker said there was talk about doing a virtual memorial because of COVID-19.

“But we thought it was important to still be out here. Because our homeless brothers and sisters are still out here. So, we wanted to be out here too,” Walker explained.

The “Remembering Our Friends” event included scripture readings and prayers by Rockford Pastors Violet Johnicker, Rebecca White Newgren and Gary Schwerin. There was also a reading of the 25 names. The Northern Illinois Homeless Coalition is made up of agencies from Winnebago, Boone and DeKalb counties.