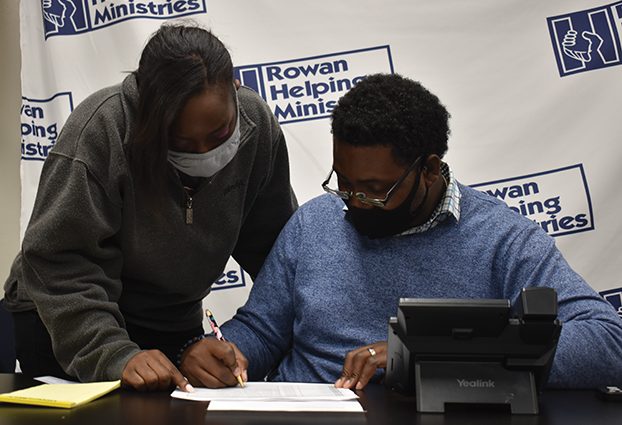 SALISBURY — Sitting at a table in the Ralph W. Ketner Center at Rowan Helping Ministries, Justin and Dominique Imes punched numbers into a telephone and made call after call.

They were working through a long list of names and numbers, contacting people who had previously been homeless to determine if their situation had changed. For the previous couple years, the couple has volunteered to help out with the Point-in-Time Count, a nationwide effort to determine how many people are living without a home on the last Wednesday of January.

For Justin, it’s been a way to give back to people who are in a situation that he was almost in himself.

“I believe if you do right by people, God will do right by you,” Justin said. “I’ve been in a situation with my wife where we were almost out of the door. I refuse not to help.”

Those numbers are the result of an altered effort to survey the homeless population in Rowan County.

In the past, Justin and Dominique have been part of a team of staff members and volunteers who fan out across the county on the night of the Point-in-Time Count to search for and count anyone living in their cars, on the streets or in abandoned buildings.

Usually, the last Wednesday of January is the longest night of the year for staff members and volunteers.

“They’ve tried to keep me out all night,” said Sherry Smith, director of client services for Rowan Helping Ministries. “We usually go out at about 10 and I think last year we stayed out until 2 a.m.”

The night ended a little earlier this year. Instead of hosting a big meal at Jeannie’s Kitchen to draw in homeless people or going out into the community to survey, the organization did a “sheltered count” of people currently in its care and had Justin and Dominique call others who have previously been homeless to get an “unsheltered count.”

“I already have a by-name list, so (Justin and Dominique) are contacting them to see if their situation is the same,” Smith said. “If they’re still homeless, they’re counted.

Wednesday night was about more than just collecting data, Smith said. It was also about providing a helping hand.

Justin and Dominique wrote down details about the situation of each person they were able to talk to. Those notes will be used later by a Rowan Helping Ministries staffer to make people aware of resources that may be available.

Having to adjust its strategy for the Point-in-Time Count isn’t the only way Rowan Helping Ministries has had to adapt. After the pandemic began, the shelter’s staff realized that in order to better serve people, they needed to go to them. The result is a bi-weekly outreach program where staff members who are accompanied by a Salisbury Police officer travel to places where homeless people may be staying to offer help.

Smith said the first time she went on an outreach trip was eye-opening.

“It was very humbling to see,” Smith said. “I didn’t realize there were that many people on the streets.”

Although the Point-in-Time Count is over, Rowan Helping Ministries is asking people who need help or know someone who needs help to call Housing and Outreach Case Manager Andrea Noble at 704-637-6838, ext. 125 or email her at anoble@rowanhelpingministries.org.