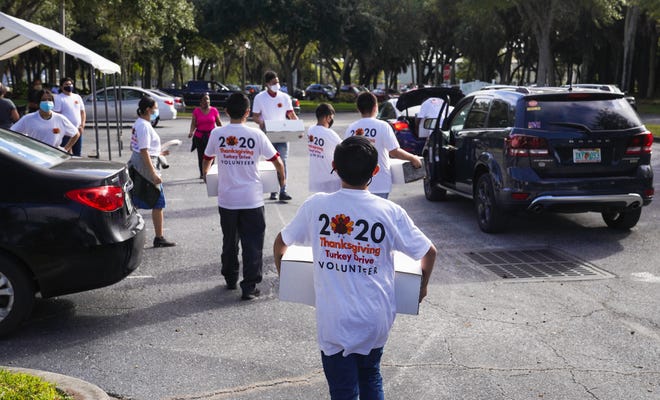 At 10 minutes until 9 the Saturday morning before Thanksgiving, a winding line of cars had already wrapped around the parking lot at Safe Children Coalition.

Black crates stacked about 6 feet high were filled with Publix pies. Boxes with turkeys, mashed potatoes and gravy, cranberry sauce and other sides packed neatly inside sat piled on wood pallets. Small kids hobbled through the parking lot, leaning the boxes on their hips to shift some of the weight.

The roughly 50 children, teenagers and young adult volunteers made the process run smoothly, from checking off the names of those driving through to packing trunks and back seats with the food. Cars rolled in in a nonstop line for more than an hour of the three-hour event.

Sarasota Lawyer Dan Dannheisser, who has raised money for the giveaway for nearly 20 years, gathered the volunteers in a circle moments after the food arrived. There was work to be done, he said, but he commended the children and young adults for their hard work first.

Without their volunteer their time, there would be 700 families in the community who may not otherwise have had a Thanksgiving dinner to celebrate the holiday, Dannheisser said to the crowd of volunteers.

This event, he said, is all about the volunteers.

“When people get together to do something that’s meaningful, it’s a difference-maker,” he said.

It gives the young volunteers a chance to be the giver when many are used to being the ones on the other side of things.

This was Kekahona-Samedi’s fifth year volunteering at the event. Coming from a low-income family, she said this event is one that always means more to her.

“There was a point in time where we were the ones in line getting the turkeys and getting free food from different pantries and different organizations,” she said. “It’s closer to home for me personally.”

Over the years, Kekahona-Samedi has seen both the number of those receiving the food and the number of volunteers for the event grow. She has been in the Safe Children Coalition Achievers program since she was in the sixth grade. Because of her time volunteering at events like the Thanksgiving giveaway and potluck dinner giveaways for the homeless in Sarasota, she said it has become her “second nature” to give.

“It’s almost like a feeling of relief when you give back and you’ve made somebody’s day a little bit better,” she said. “It’s a good feeling knowing that there are people benefiting from my time and my volunteering and my work.”

Regina Mantero, 24, is another volunteer who works the giveaway each year. As a first-generation college student, Mantero said, navigating her future can be a struggle. But she credits the nine years she spent in the Achievers program for giving her a support system and a family. Mantero recently graduated from the University of South Florida with her bachelor’s degree in criminology.

Seeing new volunteers each year inspires her because she remembers what it was like when she was a sophomore in high school having only learned about the program through a concerned teacher who knew she needed direction and leadership.

“For me, especially, having that feeling and changing someone’s life or just giving back a little bit that we can makes a difference,” Mantero said. “Or seeing someone cry of happiness and saying,‘Thank you for all you guys have done,’ that’s what is worth it to me.”

House said what impressed her most was the children and young adults and how smoothly the volunteers were able to handle a potentially chaotic scenario with 700 cars and equally as many turkeys. What the volunteers do today, House said, makes a positive impact on the community.

“What they do today really affects how the community grows and prospers,” House said. “It’s not just about Thanksgiving. It’s about empowering these young people to have fully productive lives.”

Cortnei Allen, 22, remembered when he was on the receiving end of the giveaway years ago when he was in elementary school. Growing up with a single mom, Allen recalled how grateful he was that his family received the free dinner. At that time, the volunteers only served about a couple dozen families, so the volunteers piled onto a bus and hand-delivered the meals to the families’ doors.

Now, Allen is another young adult, formerly in the Achievers program, who has volunteered at the Thanksgiving dinner giveaway for years. He has seen it grow from when he was at his doorstep receiving the food to now hundreds of cars lined up with the trunks popped open.

Volunteering at the giveaway has become a Thanksgiving tradition for Allen and his family, Allen said. He sees familiar faces not only in those volunteering with him but those in line to receive.

“Everybody should have that mentality of giving,” Allen said. “And ain’t the name Thanksgiving have giving in it?”

Angie DiMichele covers the Community Foundation of Sarasota County’s Season of Sharing campaign by highlighting the stories of people in the community who are being helped to avoid homelessness. DiMichele also covers nonprofits in the region and how they are responding to the impact of the coronavirus. She can be reached at adimichele@gannett.com.