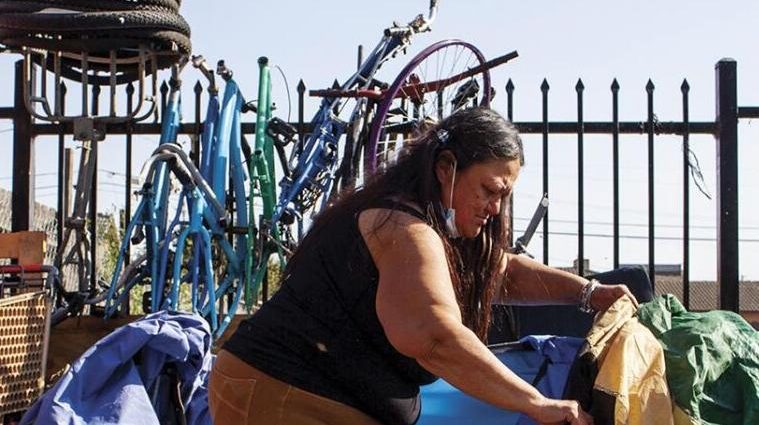 Aurelia Guzmán, a short woman with long dark hair, stands beside a wisp of a tent on the sidewalk along Soledad Street. It’s in the heart of Salinas’ Chinatown, where hundreds of homeless people live in makeshift shelters. The overnight temperature dropped to 43 degrees in Salinas that day, Oct. 26. “My feet were numb,” Guzmán says. It was her second night in the spot, although she’s stayed in Chinatown before.

Guzmán found out after arriving she would have to strike the tent and leave two days later, the date of a scheduled city cleanup of Chinatown, which took place Oct. 28, after the Weekly’s deadline. Such events include heavy equipment and dumpsters to carry away tons of waste along with valued belongings for those who don’t pack up in time.

When shelter-in-place took effect in March, the order included homeless individuals living in tents and shelters cobbled together with cardboard, wood and other found materials wherever they happened to be located. It tied the hands of city and county officials who, pre-Covid, would be able to remove such shelters frequently. During the pandemic, there is an exception when encampments are deemed to be a sanitation danger to the public.

Earlier this month, Salinas officials hauled away 156 tons of debris – including human waste and rotting food – from an encampment under the Sanborn Road/Highway 101 overcrossing near two food processing plants, says Salinas Police Homeless Outreach Officer Gabriel Carvey. The law requires giving residents 48 hours notice, but Salinas gives them 72. Before Covid, those displaced were not allowed to return for 24 hours. Officials are not enforcing that limit during the pandemic, Carvey says.

A small cleanup on East Lake Street in Chinatown took place recently to allow the city to construct a temporary shelter in a parking lot but a general cleanup hasn’t taken place since SIP began, “so conditions are quite hazardous at this point,” Carvey says.

Despite the 72-hours notice, there will be some homeless individuals who likely will not be ready to move and will see their belongings plowed away by heavy equipment.

“It’s horrible,” says Candy Mosley, formerly homeless but now a resident of Chinatown’s Moon Gate Plaza, permanent supportive housing completed earlier this year through a public-private partnership. Over her years of homelessness, Mosley lost her birth certificate, vehicles and irreplaceable photos. “Thank God I’m up there,” she says pointing to her new home.