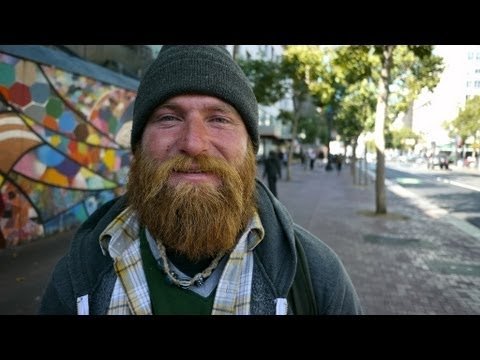 Shane’s story is a very candid interview on the connection between incarceration and homelessness.

I was walking down Market Street in San Francisco and Shane and I started a conversation. He asked why I had a camera in my hand, so I told him about my work. He then asked why I hadn’t asked him to record an interview. I explained I never interview people who are intoxicated out of respect and he seemed to have been partying. He laughed and said “I always look like this and I have only had one beer today. You should see me when I am wasted!”

After his first 7 years in prison, Shane went to the Union Rescue Mission in Los Angeles. Shane says he was doing good working the program. He was sober and even quit smoking for close to 9 months. Then one day he got a jaywalking ticket, and because any contact with police is a violation of his parole, Shane went back to jail for 6 months. 6 months jail time for jaywalking?!!

After that Shane just gave up. When he was let out he just ran, and each time he got busted again he asked for maximum time.

Shane used his time inside wisely. He learned 6 languages and earned 43 college credits, and studied about the cost of incarceration. Shane said the last report he read the federal government pays $340 in housing per day to the prison. When a prisoner is moved inside the prison gets paid $50 per move. When a prisoner is transported to court it’s $75 each way. Shane says that the prison system says they spend $486k per year per inmate, yet in reality, actual cost is $134k per inmate. I am not sure where Shane got his figures from, but according to Versa, prisons in California cost taxpayers over $7 billion in 2010. The United States makes up just 5% of the global population but accounts for 25% of the global prison population. You do all know private prisons are a growth industry and their stocks are traded on Wall Street? There is little to no incentive for people like Shane to get back to a normal life, and as a taxpayer – we are footing the bills!

I like Shane. He is a good guy that has just given up. He has spent so much time in jail that homelessness is where he feels comfortable, and that’s just wrong!

Invisible People is a 501(c)(3) nonprofit organization dedicated to changing the way we think about people experiencing homelessness.