Hours of behind-the-scenes video shot by a whistleblower show former Canadian fashion mogul Peter Nygard, who is alleged to have abused women and girls for decades, screaming at his employees and approaching a 16-year-old girl at the London Olympics.

Nygard is in a Winnipeg court today, arguing to be released on bail from jail, where he has been held since his arrest last month.

Stephen Feralio was hired as Nygard’s personal videographer in 2011. He spent the next three years documenting Nygard.

“When I first was hired, Nygard told me that the reason why Jesus is so popular is because he had a good PR team. My job was to film literally everything,” Feralio told CBC News in an interview.

Feralio, who was based in Los Angeles when he worked for Nygard, came forward and shared the video with CBC as part of an investigation into Nygard by The Fifth Estate and the podcast, Evil By Design.

“If I don’t expose him, he’s going to get away with all the things that he’s been doing,” Feralio said.

Nygard was arrested in Winnipeg in December on an extradition warrant. U.S. authorities accuse him of racketeering, sex trafficking and sexual assault involving “dozens” of victims.

More than 80 women accuse Nygard of rape or sexual assault going back four decades. Fifty-seven are part of a separate class-action lawsuit launched in New York in February 2020.

Nygard denies the charges against him and says they are all lies as part of a conspiracy meant to destroy his reputation spearheaded by his former neighbour in the Bahamas, billionaire Louis Bacon.

Several videos shared with CBC document what Nygard called pamper parties. Every Sunday for years, Nygard would host parties in the Bahamas or Los Angeles. Young women and girls were invited for what Nygard said was a day involving fun on the beach, food and dancing.

According to the U.S. indictment, Nygard recruited victims at pamper parties.

“Nygard would just come down and choose a girl. Usually they would be drunk,” said Feralio, who filmed several of his pamper parties.

“He would be grabbing them, dancing with them. And then at the end of the night, he would give me the signal and that meant stop filming,” he said. “And he would go upstairs to the room sometimes with two or three or more girls.”

One day in 2012, Feralio said, he filmed a party on the plane that included a 17-year-old dancing along with several other young women.

“[They are] all dancing on the stripper pole on the plane,” said Feralio, pointing to the teen. 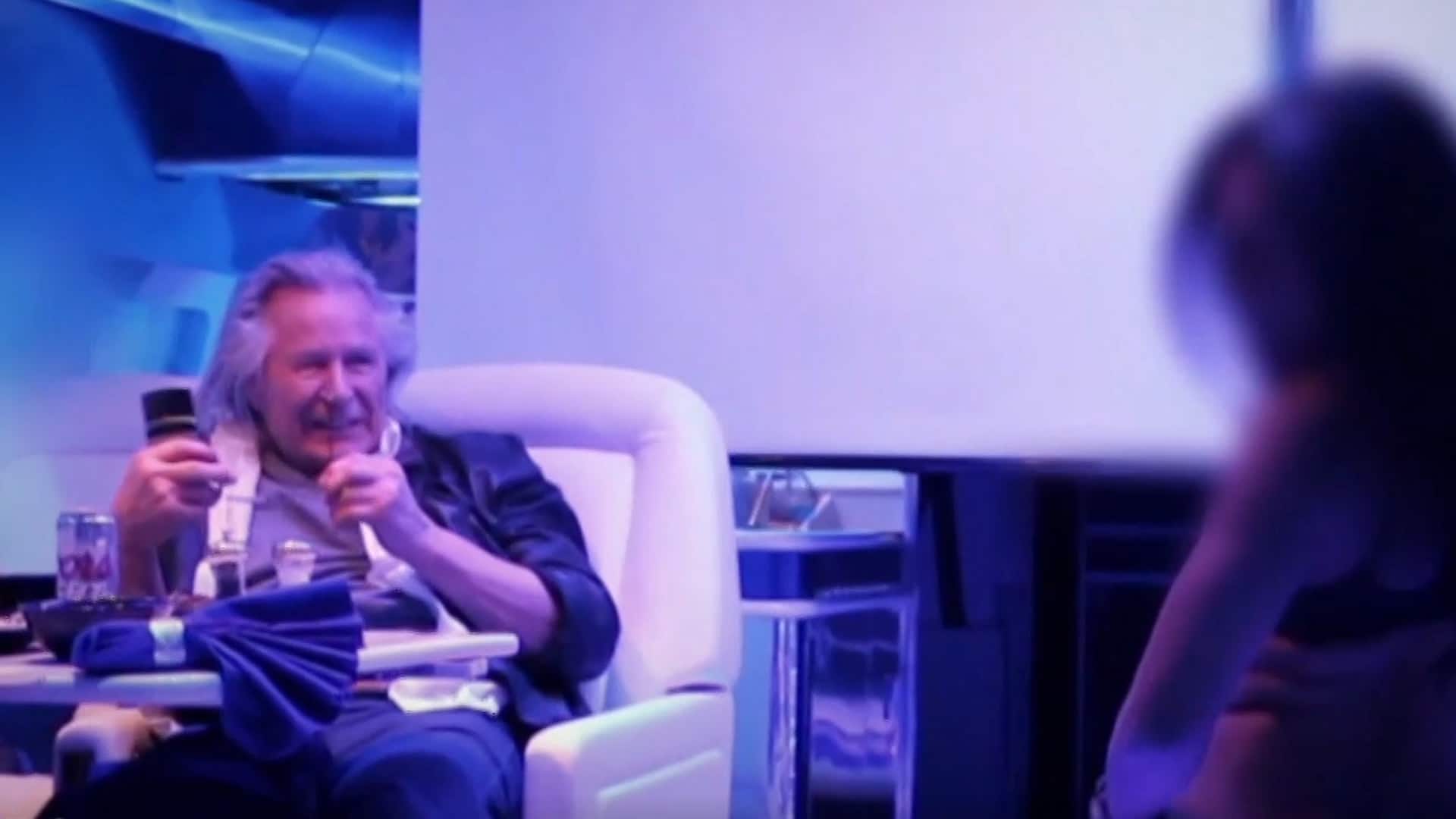 Videographer Stephen Feralio travelled with Nygard, documenting life on his private 727 airplane. One day in 2012, Feralio said, he filmed a party on the plane that included a 17-year-old girl dancing and drinking alcohol along with several other young women. 0:23

Feralio said the 17-year-old travelled with Nygard, becoming one of the women he referred to as his “girlfriends.”

According to the U.S. indictment, women and girls known as Nygard’s “girlfriends” were often victims of his alleged assaults.

“Nygard maintained control over his victims through threats, promises to grant or withhold modelling opportunities and other career advancement, granting and withholding financial support and other coercive means,” the indictment said.

Feralio documented many interactions between Nygard and his “girlfriends.”

“They were around when Nygard needed sex,” said Feralio.

“They would accompany Nygard to dinner. They would be parading in during the meetings. Nygard would call them the girlfriends.”

Another video shows Nygard and several women walking into a hotel suite in Las Vegas.

“[Nygard] motions to the room and he says: ‘This is where we sin. This is our sin bin,’ ” Feralio said.

At one point, Nygard appears to lose track of how many women are travelling with him.

“You’re all going to stay in this suite, it’s so big, so we’ve got…. You guys are with me. How many girls we got? Is there one missing?”

“No, no, you two in that room, we three here,” one woman replies.

“Oh, I thought we had one extra,” Nygard says.

WATCH | Videographer shows how Nygard lost track of how many women were travelling with him: 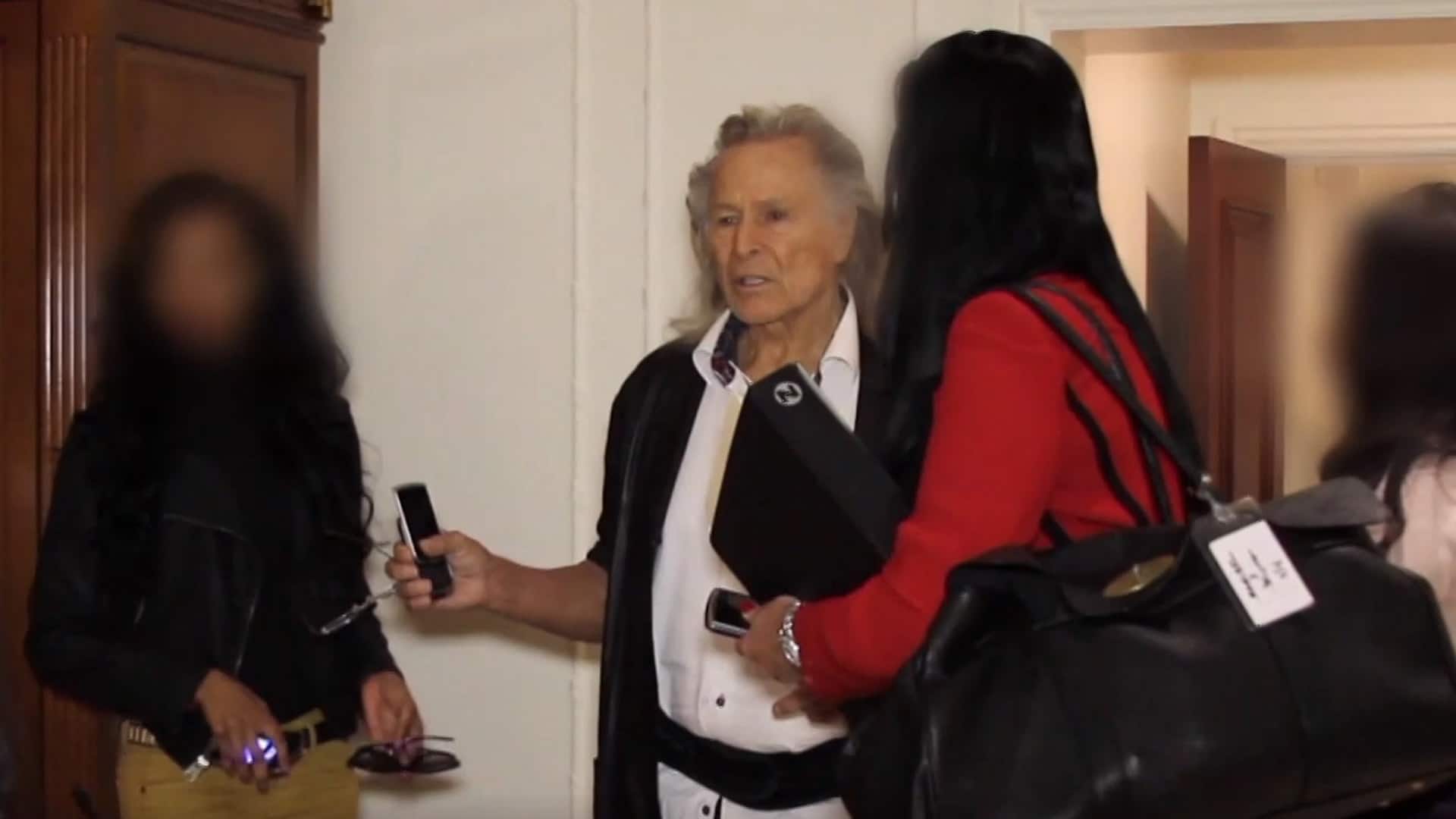 A video captured by Stephen Feralio shows Nygard and several women walking into a hotel suite in Las Vegas. At one point, Nygard appears to lose track of how many women are travelling with him. 0:32

The U.S. indictment alleges Nygard had an elaborate and extensive system for recruiting young women and girls to victimize.

“To recruit victims, Peter Nygard … and others known and unknown used a network of trusted associates, ‘girlfriends’ and Nygard Group employees.”

Feralio was filming when Nygard travelled to the Summer Olympics in London in 2012. In the video, Nygard and one of the women travelling with him can be seen approaching a 16-year-old athlete.

“Just to be here at the Olympics and to be running, good for you, and at 16 yet,” Nygard can be heard saying to the teenage girl, while he examines her Olympic credentials.

“Get her … number,” he says to the woman he is travelling with. “Her cell number or something. Two phone numbers. I don’t want to lose her now that I’ve found her.” 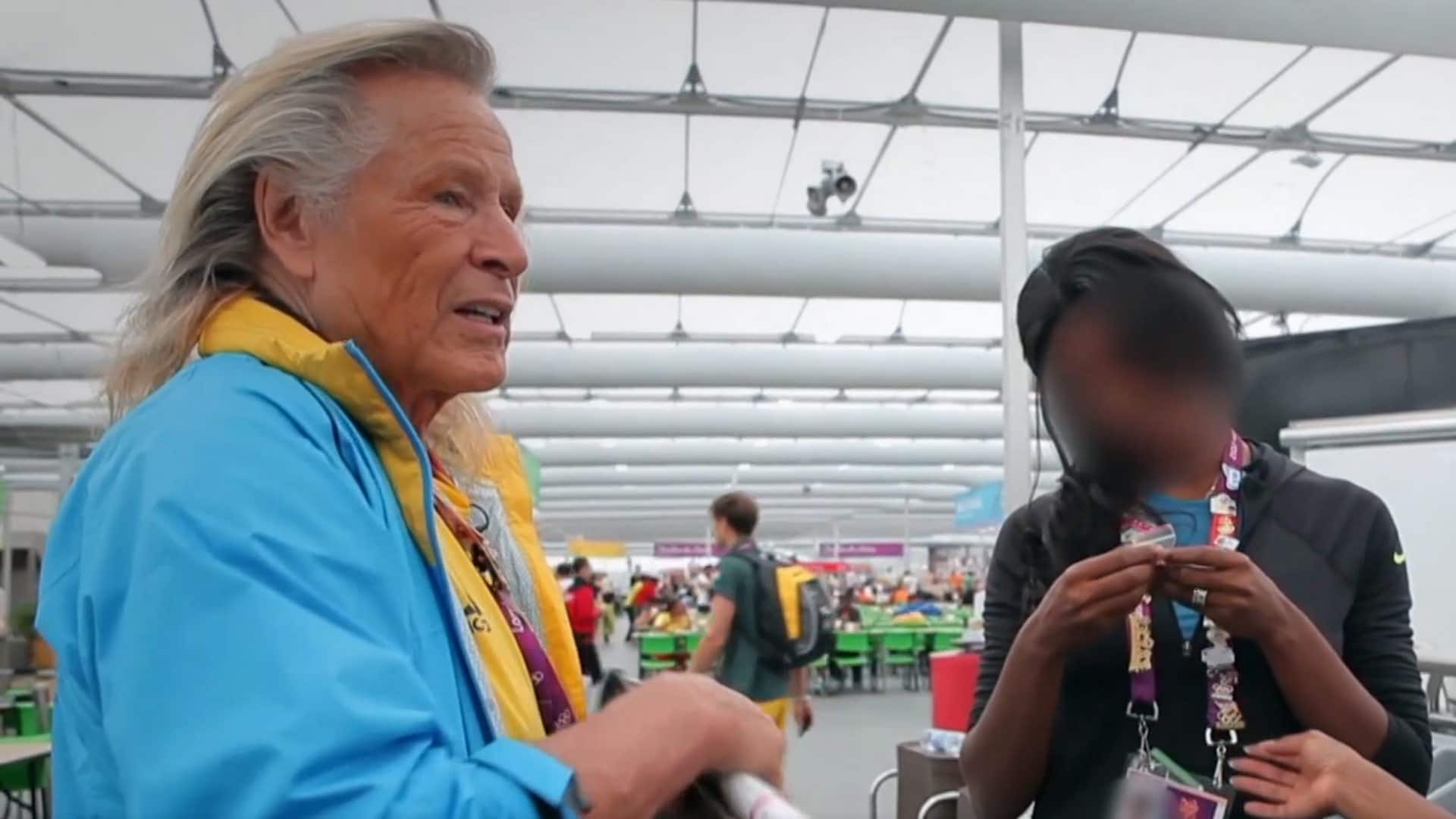 Stephen Feralio was filming when Nygard travelled to the Olympics in London in 2012. In the video, Nygard and one of the women travelling with him can be seen approaching a 16-year-old athlete. Feralio said the video shows what he describes as a typical effort to recruit a young woman for Nygard. 0:34

Feralio said the video shows what he describes as a typical effort to recruit a young woman for Nygard.

“Part of what educates this … in the past, girls have said, ‘I found somebody else so that I don’t have to sleep with Nygard tonight.'”

Other videos show Nygard yelling at his employees.

“Some of these [videos] are kind of more difficult for me to watch,” Feralio said.

One video shows Nygard screaming at someone who appears to be a male employee or contractor in the Bahamas. Another shows Nygard yelling at his staff in an airport. Nygard can be heard saying: “You’re not following my law.”

WATCH | Videographer shows how Nygard would yell at employees: 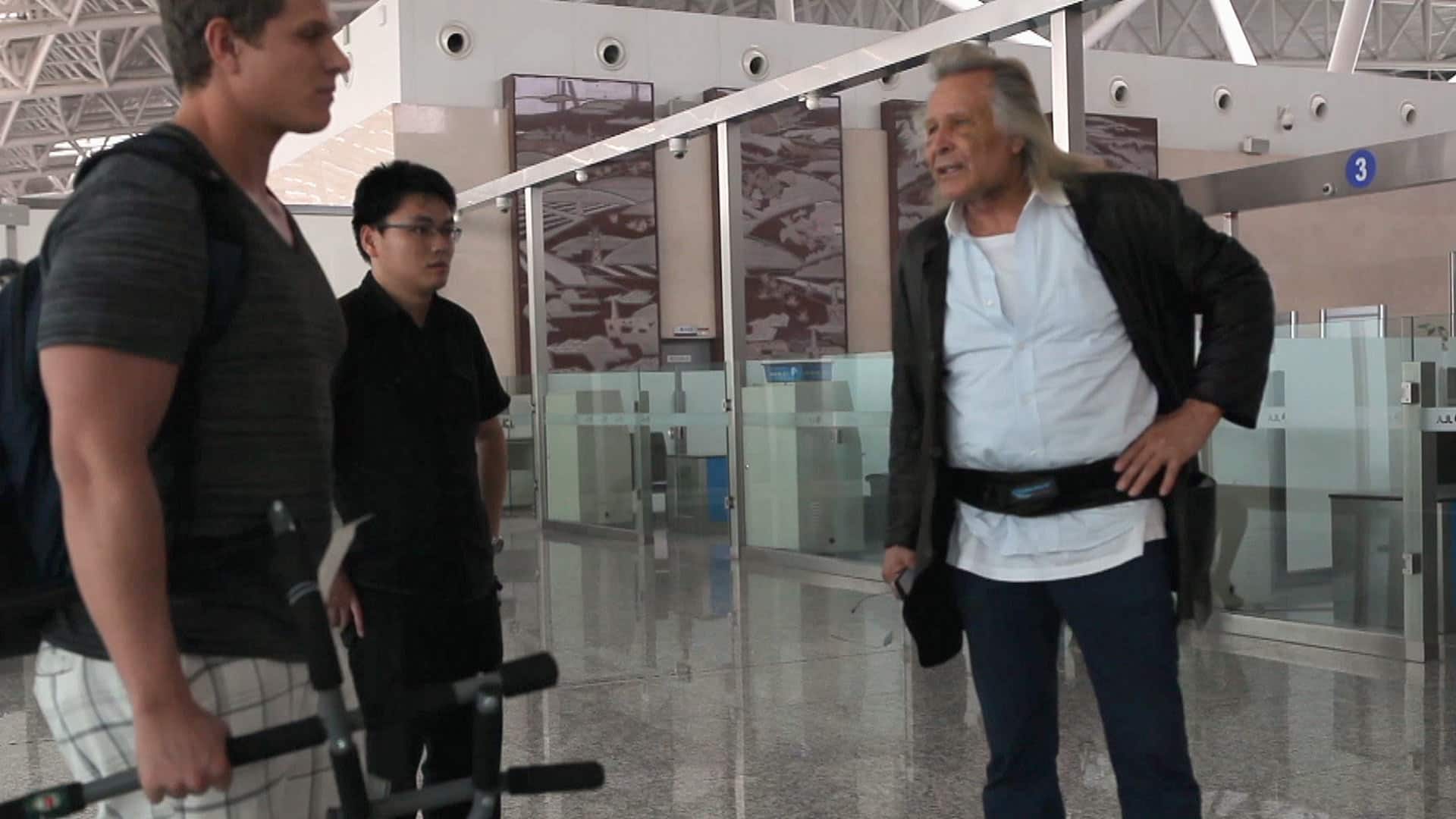 Stephen Feralio’s videos show Nygard screaming at someone who appears to be a male employee or contractor in the Bahamas. Another shows Nygard yelling at his staff in an airport. Nygard can be heard saying: ‘You’re not following my law.’ 0:23

Feralio’s videos became a hotly contested element in a bitter legal dispute between Nygard and Bacon.

The two neighbours had been feuding for years about the expansion of Nygard’s beaches. Nygard was dredging up the seabed that sits adjacent to both of their properties, causing environmental damage.

Feralio first approached people connected to Bacon in 2014, offering hundreds of hours of behind-the-scenes video in exchange for legal protection from lawsuits and living expenses.

Lawyers for Bacon filed a court action requesting access to the videos filmed by Feralio, hoping to use them as evidence in several lawsuits in the Bahamas.

Over the next five years, Nygard fought in court to keep Feralio’s video secret, arguing Feralio was his employee and Nygard owned the videos, not Feralio.

In 2019, Nygard abandoned that effort and now Feralio is sharing many of the videos with CBC.

“Nobody else in my world of Nygard has this evidence,” Feralio said.

Nygard has been in jail in Winnipeg since his arrest on Dec. 14. His lawyers argue he should be released on bail pending an extradition hearing because of his age and poor health and the risk of contracting COVID-19.