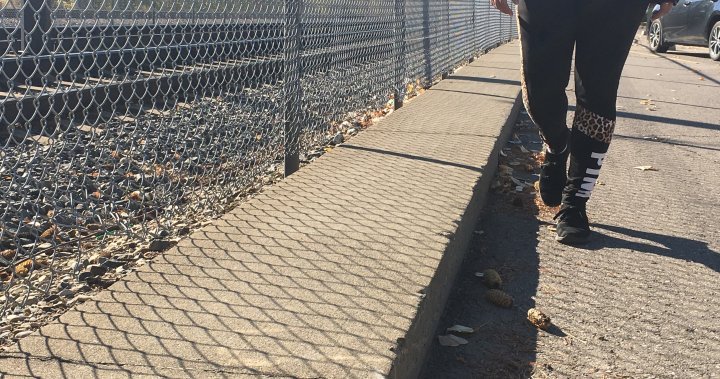 This is Part 1 of this series. Read Part 2 here.

Fourteen months ago, she escaped the grips of addiction, exploitation and her pimp, but the road since then hasn’t been easy — especially in light of a global pandemic.

“I’m not going to lie, there [are] days where I lie in bed and I think maybe I should go and use, maybe I should go back, or I could make $300 in a snap if I just go back, but it’s a choice that I make every day to come here and continue on the path that I’m on now,” Louis told Global News.

Louis and Rene, whose real names Global News is withholding to protect their identities, are survivors of sex trafficking and exploitation. They are on a journey of healing and addiction recovery at Calgary treatment centre RESET.

RESET provides housing, safety, counselling and life skills. Both Louis and Rene are making huge strides in their recovery.

Read more:
In her own words: An inside look into sex trafficking from Canadian survivors

“Every time I see a homeless person or addict, it’s so sad. It’s sad because that was me. I was the one yelling down the street, swinging around. It’s just crazy to think that was me in the past,” said Rene, who found RESET two years ago when she was pregnant and homeless.

Rene now has her own home. She saved up and bought herself a car and is taking an online course while raising her two-year-old daughter.

“The old me is definitely gone. I’ve changed so much — to being able to remember appointments to keeping my house clean. I never had a house, but I couldn’t keep myself clean,” she said.

“Everything about me is different: I don’t swear, I’m approachable now. I notice if I go to the mom parks with the kids, moms talk to me. That wouldn’t have happened if I was still using. I would have never had a chance at normalcy,” said the 32-year-old.

Louis is sober and will be going back to school soon. She wants to be a social worker.

“I try to have a radical acceptance for everything that happened. I can’t forgive everyone; there’s just too much hurt,” said the 21-year-old.

Read more:
Survivors of sex trafficking share their stories of resilience and bravery

Global News first met the women in February. They squeezed together on a couch and bravely shared their painful stories of surviving a world of drugs, violence and exploitation.

But one of the women on that couch last winter is no longer in Calgary. Global News has learned she left during the pandemic shutdown and returned to her old life.

3:17Breaking Free: Survivors of sex trafficking share their stories of resilience and bravery

Breaking Free: Survivors of sex trafficking share their stories of resilience and bravery

While upsetting, it’s not surprising to Rene and Louis, who admit there have been times they’ve thought about what it would be like to go back.

“Addiction is strong and past relationships are even stronger and when you want that, you follow it,” Rene said.

It’s a reality RESET fears the most. Two other women left the program in the spring both recently overdosed and died.

“It’s really sad; they were really young,” Rene said. “The one had a daughter. Now she’s left with no mom.”

RESET caseworker Kayla Campbell said the pandemic shutdown added pressure on many of the women already facing uphill battles and feeling isolated in their recovery.

“The ones that we lost so far along the way… I think that just having to stay in one place in the house with all of the stress and anxiety and uncertainty that was going on in the world, it just became too much for them or they needed that connection outside of the program again,” Campbell said.

Campbell said many agencies and resources that women who have been sexually exploited currently rely on aren’t taking clients or are closed altogether. RESET tries to triage those at higher risk but the waiting list is about six months.

Rene was addicted to heroin for 13 years. Louis struggled with meth. They admit that staying home more during the pandemic triggered old demons.

“It was also a learning curve for me in the sense of being able to understand my cravings more and dive a bit more with my counsellors,” Louis said

“It’s just hanging over your shoulder ready to take you back out and that is never going to go away. It’s always going to be there. I just have to have a strong mind and pull through those cravings,” Rene said.

Both women are motivated to leave their pasts behind and make a real difference in their futures.

“Going back to addiction, going back to working or being trafficked again and losing my loved ones… that will always be my greatest fear because I think that could have been the lowest part of my life and I don’t ever want to go back to that because it was just a bunch of guilt, shame and heartache. It just wasn’t worth it,” Louis said, adding she prays every day for the women still out there.

If you or someone you know is a victim of human trafficking, a 24/7 hotline with critical resources is available to Canadians in more than 200 languages. The Canadian Human Trafficking Hotline can be reached at 1-833-900-1010.