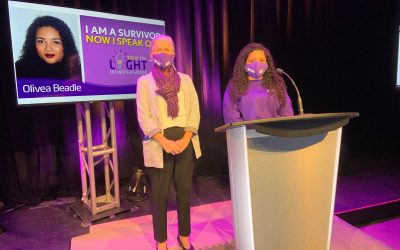 
The owner of a spa in Lambeth, who was a victim of sex trafficking, is being spotlighted as part of this year’s Shine the Light on Women Abuse campaign.

The London Abused Women’s Centre (LAWC) introduced Olivea Beadle as this year’s campaign honouree during an online news conference Thursday. Beadle, who was born in Sarnia and was raised for a time in London before moving to Glencoe, spoke about the three years in which she was an escort who was often abused by her pimp.

She said he broke her hand, choked her, and forced her to sell her body. But she was able to escape the sex trade thanks to assistance from the London Abused Women’s Centre.

“When I went to the hospital to be treated for my injuries, a staff member referred me to the London Abused Women’s Centre so I could get the help and support I needed to safely leave my pimp as I lived with him, making my situation very risky,” she said.

Beadle was eventually able to get away from her pimp and leave the sex trade. She now owns a spa on Main Street in Lambeth.

“I just celebrated my two year anniversary in September. Not only for my business, but also two years of bring free of human trafficking and two years of being safe,” she said. “And for that, I am hopeful that other women and girls can feel safe one day, too.”

The Shine the Light on Women Abuse campaign aims to raise awareness of the issues of men’s violence against women and of the dangers posed to women in the sex trade. This year’s campaign, which runs through the month of November, comes at a time when many abused women and children are forced to stay in their homes with their abuser because of the COVID-19 pandemic.

LAWC Executive Director Megan Walker said the centre has seen a 28 per cent increase in demand for its services during the pandemic.

“There has never been a time in my history of working at the London Abused Women’s Centre where we need to be more aware of the needs of abused women and children because of COVID,”she said. “Abused women are isolated in their homes every day with their abuser where they are forced to endure incredible acts of torture, assault, and verbal abuse. Their children are witnessing this and are exposed to it every day.”

Throughout the month of November, many buildings in London will be bathed in purple light in support of the Shine the Light campaign. Walker says Friday, November 13 has been designated as the day on which people are encouraged to wear purple clothing to show their support.

The official kick-off of the campaign is scheduled for Monday, November 2 at 5:30 at the Tree of Hope in Victoria Park.