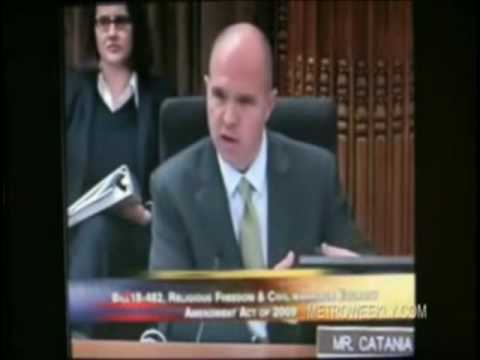 Catholic Charities, a service-providing arm of the Archdiocese of Washington, testifies before the DC Council on October 26, 2009. They state that same-sex marriage is incompatible with their religious beliefs. And that if gay men and lesbians are allowed to get married under a new law, they will no longer be able to provide services for health care, the homeless and child placement services.

Councilman David Catania points out that their operating funds come from public tax dollars (75%), and that President & CEO Edward Orzechowski takes home a substantial salary ($268,000 according to Washingtonian). Orzechowski says they will not provide health benefits to gay spouses, nor would they place children in the households of gay couples, even though they are currently required to do so for same-sex couples who are currently in domestic partnerships. In fact, they Archdiocese’s representatives indicate that they would like to have that provision repealed as well. Also, Catania has it on record that Catholic Charities has only provided 5% of the adoptions in DC last year — six of 102 wards of the city. He says he’s offended by their “take my ball and go home” attitude, that he alone fought for funding for the Council to fun Catholic Charities in the past, and that he’d like to work on a compromise but it would be difficult.

David Catania is one of two out gay Councilmembers, but 10 of the 13 have already stated that they strongly support the bill.

On November 11, the Council revised the bill in an effort to give religious organizations even more leeway than the bill already provided, but the Archdiocese and Catholic Charities stated the next day that they would still not be able to comply unless they were allowed complete ability to discriminate against same-sex couples who are married on the basis of religious belief. All of which leads some to conclude that Catholic Charities and the Archdiocese never had any intent to work with the Council on crafting an acceptable compromise; which is likely because their spiritual leader, Pope Benedict, has repeatedly declared gay marriages to be unacceptable.

I was born a Catholic today I call myself Christian. I am deeply ashamed of Cathoilic Charities and am very disturbed by a trend that would allow those that are in the most need to be hurt because Mormans & Catholics would choosee to be political. It is time that straight men and women who are Catholic to say enoufe is enoufe.