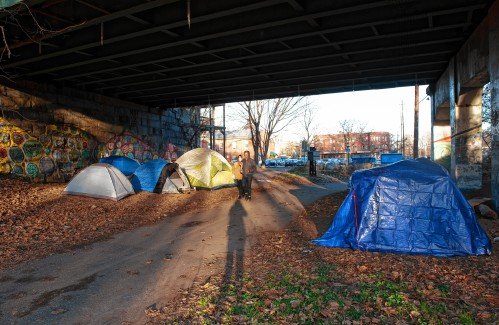 BOSTON – As temperatures fall and positive coronavirus cases rise, advocates are raising concerns about homelessness in Massachusetts, where shelters remain at a reduced capacity due to the pandemic, and many are anticipating having to turn people away as outside conditions worsen.

Estimates of the size of the state’s homeless population hovers around the 18,000 mark, according to estimates from a 2019 report by the U.S. Department of Housing and Urban Development. Though in previous years Boston has been able to accommodate almost its entire homeless population, organizations are struggling to allow guests to distance and still provide adequate shelter.

State officials speculated in a recent report that homeless shelters around the state are short a few hundred beds, according to Massachusetts Housing and Shelter Alliance President Joe Finn, leaving many communities scrambling to find space to spare.

Father Bill’s, a shelter in Quincy, had to set up smaller satellite shelters at the beginning of the pandemic to offset the decrease in capacity due to pandemic restrictions before transitioning to leasing hotels to make up for capacity.

And while Father Bill’s has managed to provide the services necessary to keep their homeless population’s positive test rate well below state averages, the effort has already cost around $300,000, said the shelter’s community relations and marketing manager Patrick Ronan.

While worrying about being able to provide adequate space, Father Bill’s is also facing the fear of catching the virus in shelters. According to Ronan, the number of people sleeping outside more than tripled during the summer over fears of infection.

“We cannot go back to the days where we are packing people into a crowded shelter, putting mattresses on a floor, repurposing office space and using it as people’s bedrooms so they can sleep on the ground overnight,” Ronan said. “That’s just not a sustainable system. It’s not sustainable financially, and it’s not a humane response to homelessness.”

Pine Street Inn, another organization that provides services to the homeless in Boston, is also struggling to meet the needs of their community. Like many others across the state, the organization faced a difficult task at the beginning of the pandemic, with 36% of tests run on their guests returning positive, said Barbara Trevisan, the organization’s vice president of marketing and communications.

“So far the city has about 200 additional beds that they have found in various locations around the city to be able to take in people who need shelter,” Trevisan said.

In addition to providing shelter from the elements, Finn said, providing housing for the homeless is also an important measure to help slow the rate of infection. While most people are able to stay at home to lower the risk of infection, many people experiencing homelessness do not have that luxury.

“This is a highly asymptomatic population,” Finn said. “They’re quite transitory and they are out and about and could very easily be spreading that virus.”

Finding spaces where homeless people can have privacy is also a good long-term strategy, according to Finn. These private spaces, which he calls “non-congregate housing,” give people a safer, more long-term solution than more traditional hostel-style accommodations, called congregate housing, offers.

“We had been saying all along that we felt that (congregate) shelters were not the best possible way of meeting the needs of homeless persons,” Finn said. “I think that the COVID outbreak really laid out how true that was. Most of the shelter providers now agree with us in the sense that they never want to go back to the way it was before because it’s just not a healthy situation or a good situation.”

Another cause for concern for homelessness advocates is the potential of increased evictions since the end of the state’s moratorium. Just days before the act expired in October, Gov. Charlie Baker announced a $171 million plan to relieve pressure on tenants and landlords alike. Baker has said that he believes that there are enough resources available that another moratorium is unnecessary.

Some state representatives disagree. Bill H.5018 proposes more aid for small landlords and tenants for the next year, including new options for deferring mortgage and protections from rental debt collection. The bill is currently awaiting action from the House Committee on Rules after being referred there in early November, leaving local authorities to deal with evictions without a moratorium.

In Pittsfield, members of the Homelessness Prevention Commission have asked Mayor Linda Tyer to put $75,000 of the city’s free cash towards aid for the homeless, another strategy advocates are using to provide for the homeless.

Cutting capacity of the Barton’s Crossing shelter in half in accordance with state COVID guidelines triggered a large displacement of people, City Councilor Kevin Morandi said, adding that many of Pittsfield’s homeless are living in informal housing like tent encampments at the Springside Park.

As of Dec. 1 however, Pittsfield’s parks commission has prohibited people from using the park for housing, leaving many displaced once again.

“We really have a problem in the city, and we’re not the only city that has this problem,” Morandi said. “It’s something that we should be dealing with, and … in a way that is proactive and that meets the needs of the people of the homeless population.”

Morandi hopes that the campaign to allocate $75,000 for the homeless will help push the conversation forward and keep people experiencing homelessness in the forefront of city officials’ minds as the challenge to house the homeless this winter threatens to worsen with a potential for a rise in evictions on the horizon.

City Life, a Boston-based tenants’ rights organization, has been advocating for an extension of the state’s eviction moratorium.

The group provides rental assistance and according to Helen Matthews, the communications manager at City Life/Vida Urbana, tenants have been reaching out for help in staggering numbers since the end of the moratorium in October. According to Matthews, there are over 100,000 people at risk of eviction or foreclosure between renters and homeowners in the state.

“We’ve gotten thousands of calls on our hotline,” Matthews said. “In a pandemic, housing is health care. Evictions have been directly correlated to increasing infections.”

The study Matthew points to was released by UCLA found that state eviction moratoriums that were allowed to expire may be associated with nearly 11,000 deaths. Though the study has not been peer-reviewed, the data shows the potential consequences of allowing eviction moratoriums to come to an end.

Without a moratorium, Matthews said, people are much more likely to be moving between residences and living in overcrowded conditions, both of which would increase chances of catching the virus.

However, some small landlords are also struggling to make ends meet without income from tenants. Jonathan Daponte, a landlord and funeral director in Fall River, said that he opposed the eviction moratorium because it restricted his rights as a landlord too much. Without the ability to hold tenants accountable for payments they could afford, Daponte said that some tenants refused to pay him anything at all.

“There was no opportunity for the tenants to even make an effort,” Daponte said. “Effectively what the government did was repurpose my housing for people who could pay, but didn’t want to pay.”

Daponte was one of the landlords who sued the state over the eviction moratorium, and said that if another moratorium were to be reintroduced, he would sue the state again to avoid further losses.

Though state representatives and senators are working on a bill to both aid tenants and provide relief to small landlords, Matthews said that the future of homelessness due to the pandemic is uncertain.

“What it really depends on is whether or not lawmakers will step up and intervene in the crisis,” Matthews said, “Ultimately, this problem is in their hands.”