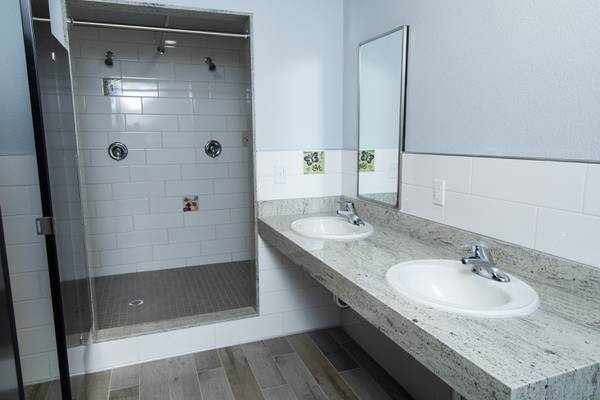 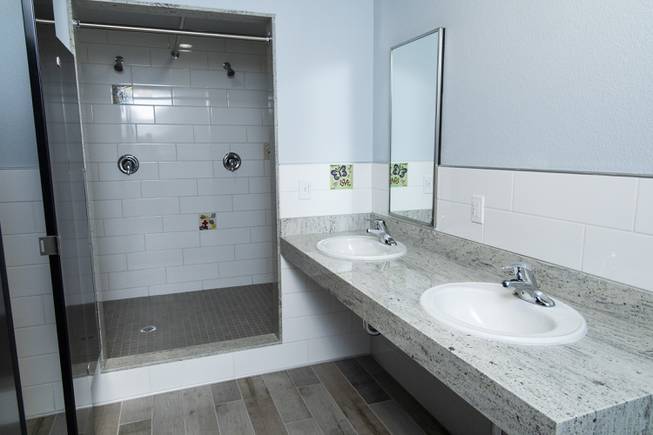 A bathroom and shower areas is seen during an unveiling ceremony for the newly renovated Las Vegas Rescue Missions women and children facility Tuesday, Nov. 17, 2020.

Before the Las Vegas Rescue Mission was remodeled, the downtown homeless shelter had just one bathroom to serve 88 guests in the women and children portion of the facility.

That is no longer the case, as a recent upgrade brought two new bathrooms, complete with showers, and more open space to address overcrowding. Tubs were replaced with three showerheads in each bathroom, and work stations were constructed in the new space so residents can use computers to apply for jobs and further aid.

“You only imagine this shelter as a place that you don’t want to be in,” said Darshana, 33, who has been at the shelter since September after losing her job and whose last name is being withheld to protect her privacy.

She continued, “I’m comfortable. I’m happy and grateful I can get myself together financially and mentally.”

The upgrades come at a perfect time. The organization that annually feeds and shelters hundreds of homeless men, women and children has seen an increase in need during the economic downturn caused by the coronavirus pandemic. With COVID-19 cases spiking, people who thought they would return to work aren’t able and their unemployment benefits are running out.

The renovations were made possible by donations and voluntary construction work from Penta Building Group, a general contractor, and AGC Charities Inc., a national construction philanthropy organization. The two companies partnered to provide the means for the two new bathrooms, upgraded windows, roofing, doors, plumbing, lighting, a new security system, additional storage and replacement flooring at the women and children’s facility.

Brian Turmail, a spokesman for AGC Charities Inc., said the pandemic made organizations like the Las Vegas Rescue Mission all the more important for the community. It was a project AGC embraced, he said.

“While contractors have tough jobs, they’ve got soft hearts,” Turmail said. “So many firms donated materials and work despite what is going on.”

A stone slab recognizing donors is seen outside the Las Vegas Rescue Mission’s women and children facility during an unveiling ceremony for the new renovations Tuesday, Nov. 17, 2020.

AGC donated more than $50,000 to go toward renovations. Penta provided more than $800,000 in volunteer construction work and materials.

Ashley Bunn, a case manager at the mission, said she’s assisted nearly 100 families since the pandemic began, many with multiple children. Most of the phone calls start with frantic crying, she said.

But at the shelter they are able to get assistance, which is why upgraded bathrooms and other amenities were desperately needed. Many who come to the shelter haven’t showered in days of sleeping on the streets.

Darshana said mopping the new vinyl floor will be easier than vacuuming the old carpet that was in place. Everybody in the shelter does chores three times a day. “We treat it like a home. We take care of it like it is our home,” Darshana said.

Donations can be made to Las Vegas Rescue Mission by calling 702-932-8170 or emailing [email protected].