Soup kitchen struggles to feed the poor and homeless during MCO 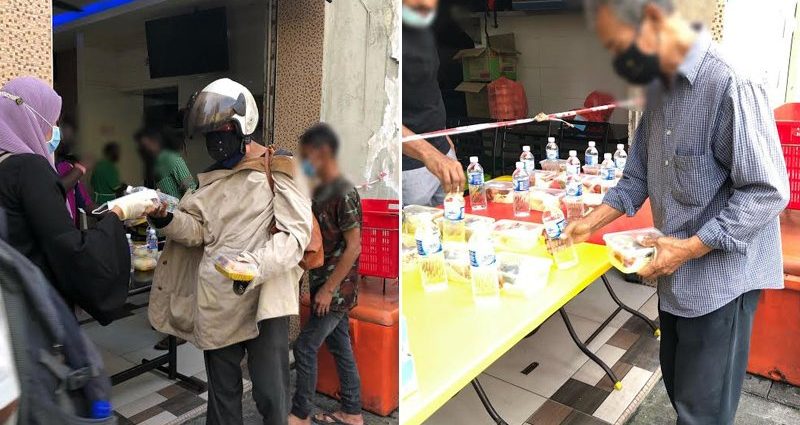 PETALING JAYA: These are tough times we are experiencing. With spikes in Covid-19 cases and reinforcement of lockdowns, lives have been affected everywhere. The pandemic does not discriminate, after all, leaving all industries to suffer the consequences.

Some people had the option of retreating into the safety of their homes, with their pantry and kitchen cupboards stocked with necessities and groceries.

Unfortunately, the homeless and poor have no such luxury. And with the pandemic still raging on, it may seem as if there isn’t any light at the end of the tunnel.

Even the NGO, Need to Feed the Need (NFN), a soup kitchen based in Medan Tuanku that has been distributing food and other basic necessities since 2013, has been struggling to overcome its share of difficulties.

Before the pandemic, the NFN team could be spotted providing hot meals to approximately 400 people every Thursday night, without fail.

But once the MCO was implemented, things changed.

NFN’s field operations head and lawyer by day, Adora Yusof, told FMT that the team was not able to physically distribute food during the lockdown.

As a solution, NFN came up with the idea of providing suspended meals to the needy by collaborating with a local mamak called MMZ Bistro.

“But then the authorities rounded up the homeless community and they were placed into shelters.

“So we started sending meals to the shelters but it wasn’t like before – it was just one meal. It was breakfast, lunch, tea, dinner and supper at one go,” explained Adora.

According to Adora, NFN was supplying about 500 to 600 packs of food daily but this meant that they had to increase their expenses by a massive fivefold.

The hardworking team even upped their food distribution to twice a week on Tuesdays and Thursdays throughout the conditional movement control order (CMCO).

“Right now, however, we are back to Thursdays only because we have exhausted our finances from the first MCO. Two-thirds of our expenses have all gone to food.”

But, she reassured that the Tuesday shift has been handed over to another soup kitchen, so recipients will still have a continuous supply of food.

Besides the dwindling funds, Adora has her mind occupied with the rising number of Covid-19 cases in Malaysia.

She said that she worries that this will affect the marginalised community – both mentally and emotionally – since finances will be extra tight and job opportunities are scarce these days.

“A majority of them are out of a job because most of them collect scraps for a living. Some of them are security guards and technicians, but they too have been laid off.”

Due to the lack of money available, Adora laments that the poor, homeless and marginalised might resort to negative tactics to get by.

She also added that the number of domestic violence cases had increased during the first MCO.

“Those were the documented cases, but what about the undocumented ones? Even before the pandemic, domestic violence was happening frequently but with the added stress and lack of money now, things could be worse.”

But her charitable heart weeps for the families with children. Basic necessities have always been a big issue, but it has been made even bigger now with the implementation of online learning.

“I highly believe that most of them do not have access to laptops or computers, which means the kids are not attending lessons and will end up slipping through the cracks.

“That’s the downsides to online learning because, for that, you would require at least a smartphone and data.”

Adora recalled that she spotted children queuing up for their share of food, often represented by the eldest child.

“They are so polite and would ask me whether I am doing well because to them, this food distribution is more like a social event where they can see us as friends,” explained Adora with a hint of sadness in her voice.

Besides distributing food, NFN would provide second-hand strollers as well and according to Adora, they have a list of recipients waiting for their turn to receive a stroller.

“NFN is not just a charity that distributes food. The people behind it become part of the poor and homeless’ lives, and we also watch their kids grow up and become their support system,” she said.

However, Adora explained that what’s left of their funds isn’t going to last NFN long – especially when it comes to helping the needy during the second round of MCO.

To this end, NFN is conducting a donation drive in hopes of being able to continue its goal and mission to feed the needy.

NFN always maintains a policy where a full meal must be given to recipients, and this would usually consist of a protein source (usually chicken because it’s accepted by all people) vegetables, rice and a bottle of water.

According to Adora, this would come up to about RM6.50 per person.

“What motivates the rest of the crew and me is that at some point in our lives, we were all part of this community.

“Maybe our lives were not as hard but we all needed help at one point,” smiled Adora.

To further help NFN’s cause and feed a hungry tummy, all monetary contributions can be donated to:

You can also get in touch with NFN through their Facebook page or Instagram for more information. Don’t forget, a little goes a long way.