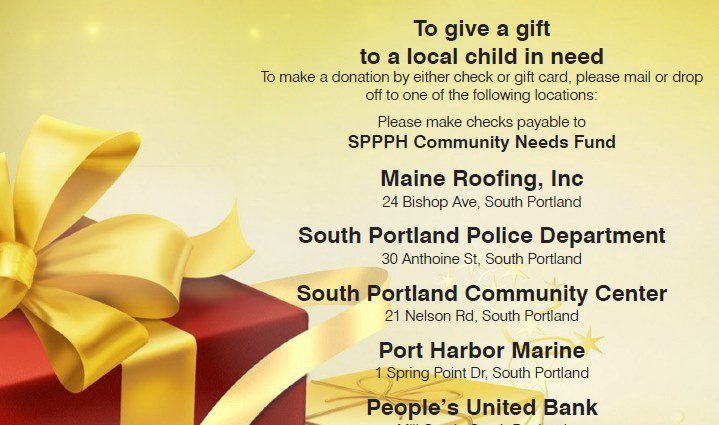 This is the ninth annual toy drive, Darling said. Each year the community comes together to help children in South Portland receive winter coats, hats, boots, mittens and toys.

Last year the South Portland Christmas Toy Drive was able to purchase items for 260 children, the largest number yet, she said.

Due to COVID-19, the drive cannot collect physical items from donors at drop-off locations this year, Darling said.

“We’re working really hard to raise the funds, which I’m really, really nervous about,” she said. “When you think about it, our average cost per child on the low side is around $200. And for 260 kids, that’s $52,000. The majority of that I have donated by the public with physical products. So this year I don’t know what I’m going to bring.” Darling created a GoFundMe page and said that she is accepting checks or cash. People can drop off donations at Maine Roofing, Inc, the South Portland Police Department, South Portland Community Center, Port Harbor Marine and People’s United Bank. Checks can be made out to the SPPPH Community Needs Fund.

“It’s going to be whatever we can get,” Darling said. “I’ve already dropped off boxes and boxes of coats that I’ve been purchasing. Last year, I went out at the end of the year when everything went on sale to probably 75 percent off, and I spent probably $4,000 on coats. Thank god I did that because we didn’t know (COVID-19) was going to happen this year. It gave us a good start on the coats.”

Darling said she is heartbroken that the pandemic is pushing more families to the brink and putting them in need.

“There are more families hurting this year, a lot more families,” she said. “We don’t know what to expect this year as far as donations go. Every year I panic halfway through the campaign and say, ‘Oh, my goodness, what am I going to do?’ And then all of a sudden it all comes together. I pray it happens again this year.”

Before Darling first started the drive, she had been buying toys for her employees, she said. One year, she tried to help through other means, but found that she had missed the October deadline for most toy collections.

“So I thought, if there are these kinds of kids out there, there must be others,” she said. “I’ve always volunteered with the police department, the school department, just different things, and with my talk with the police, I found there were a lot of families in need, right in our community. In South Portland, you think of just the blue collar working community, but in every school, in every section of the city, there are people struggling, so that’s how it began.”

Darling said that she believes every child should have a warm coat in the winter and should receive presents, regardless of if they celebrate Christmas or not.

“The stories are inspirational,” she said. “I want to help the children as much as I can. I call it the Christmas Toy Drive because that’s what I believe in and that’s why I started it, but I think every kid deserves to wake up with a warm coat, boots, toys, whether it’s on Christmas or any day.”

People in South Portland might not think about it, but there are homeless children in the school district, Darling said.

Two years ago, a woman received two bicycles for her son and daughter, Darling said. She cried and thanked volunteers, saying that her children had never had bicycles before.

“We had (the collection) at the Community Center last year, and we basically filled the whole center with bags and bags,” she said. “It was amazing. I was there the whole time and just sat back and watched the families come in and get the goods. They were crying, and you could see they were just so thankful. It’s truly heartbreaking to see these families.”

Darling believes that its the generosity and closeness of residents that makes the drive a success each year, she said.