Stuck in a Brandon hotel, homeless family almost out of time and money 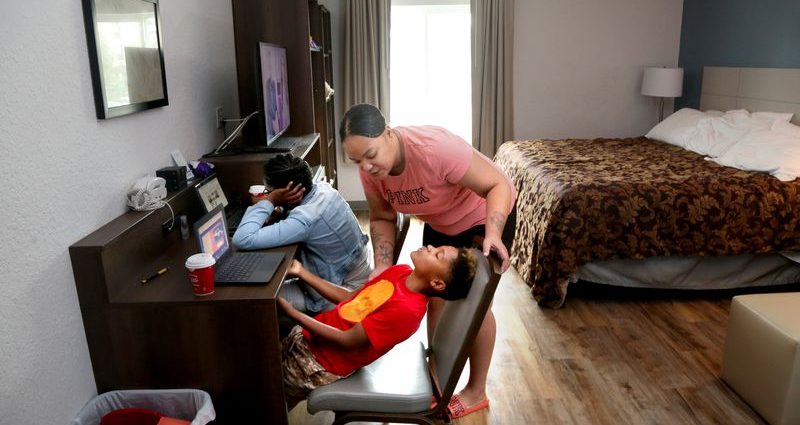 BRANDON — At least once a week, Shenika Zunich calms the nerves in her stomach and calls the Pasco County Housing Authority.

A housing voucher, she has no doubt, will change her life. It would mean a stable, affordable home for her and her two children. It would mean no longer sharing a king-sized bed in the Brandon hotel room they have lived in since August.

A self-employed house cleaner, Zunich lost her regular work when the economy went into lockdown in March. Their hotel room costs more than $1,500 a month. She estimates she has enough money to stay at the hotel only one more month.

The family became homeless earlier this year when she and her children moved out her parents’ home in Tampa because she was seeing the same domestic violence that led to her and her siblings being taken into foster care when she was 9. She recalls being dragged from her mom’s arms and watching through the rear window as her mom ran helplessly behind the car that took her away.

It’s a trauma she can never let her children share.

“I’m trying to keep it together,” said Zunich, 37. “I have to stay positive for my children.”

The dearth of affordable housing was considered a crisis by many advocates even before the coronavirus pandemic. The economic downturn that resulted has made conditions worse for many like Zunich.

“This theme, that the economic impact of COVID-19 has disproportionately affected low-income and minority families more, is very real,” said Christine Long, chief programs officer at Metropolitan Ministries, a Tampa nonprofit that provides food and shelter. “Folks that had lower-paying, service-related jobs lost their jobs first, and those jobs just aren’t coming back quickly.”

Since March, Zunich has looked for other jobs. That got harder when Hillsborough County closed schools because of the pandemic. Nothing she found came close to covering the cost of daycare.

At the start of this school year, she opted for her children, Lylah Golden, 13, and Jermaine Golden, 10, to go back to school. But a positive coronavirus case at Jermaine’s school convinced her that online classes would be safer.

On a recent Tuesday morning, the children worked on school-issued laptops at a desk in the hotel room. The TV, tuned to a cable cartoon station, played in the background.

Zunich said the hotel was the cheapest she could find that came with a refrigerator, microwave and stovetop. She has no oven, but she cooks dinners like pork chops, chicken and spaghetti. The hotel also has a laundromat.

She keeps the room tidy. Cereal and condiments line a shelf above the stove top. Folded T-shirts and shorts are stored in a closet that has no doors. Flipflops and sneakers are lined up along its bottom shelf.

An archetypal commuter town, Brandon has a mall and dozens of chain restaurants. But Zunich’s 2017 Chevrolet Malibu was repossessed last month, and there is nowhere within walking distance where her children can play or where they go to eat.

Instead, once a week, her older daughter drives her to the grocery store where she uses food stamps to stock up on staples. Zunich gets $125 a month in state unemployment benefits and about $780 in supplemental income from the federal government to help support her children.

The children’s father takes them out for activities, including Jermaine’s basketball and baseball. But other days are a struggle to keep the children entertained in their room.

Zunich spent about nine years in foster care. Most of that time was with her grandmother, but when she was 15, she was placed with a series of foster parents.

In one home, the fridge was locked and windows were nailed shut. In others, she chafed at being told when to eat and when to bathe. She ran away from several homes.

The disruption led to her dropping out of school in 11th grade, although she earned a GED, an alternative to a high-school diploma.

That childhood was followed by a troubled relationship with her children’s father. She was verbally abused, she said, and developed post traumatic stress disorder. She said she has severe depression, and anxiety and panic attacks.

Zunich has been on the housing waiting list in Pasco for two years. She was lucky. Her name was among 1,000 families chosen at random in 2018 by a computer program from 7,000 applicants.

It usually takes about two years for the housing agency to work its way through the list, said executive director Terrie Staubs.

Zunich applied to Pasco because the waiting list in Hillsborough has been closed to new entries since 2019. It’s a similar story in Pinellas County, where about 3,500 people are waiting for either a voucher or a place in public housing. The list there closed on Oct. 5.

Related: More than 25,000 people in Hillsborough face up to 10-year wait for public housing

The U.S. Department of Housing and Urban Development limits how many housing vouchers the agency can issue based on funding allocations. Pasco’s list is down to about 220 families. Staubs hopes to be able to issue vouchers to them by the end of this year.

“It’s nice to be able to help folk; I just wish we could do more,” Staubs said.

Zunich knows that she’s closer than ever to getting a housing voucher. Sometimes when her kids have bored of TV, she gets them to draw designs of the bedroom they would like when they move.

Lylah’s drawings include posters of rap stars on the wall. Jermaine has a shelf for his baseball trophies and medals.

Zunich hopes that day isn’t too far away. Her children can stay with their father if they are forced out of the hotel, but she would have nowhere to go.

“I’ve gotten through many tough situations,” she said. “I just need a boost to get me on my feet.”

A gofundme page has been set up for Shenika Zunich at http://gf.me/u/y4scwp.

2020-10-24
Previous Post: Shower, WiFi and a warm bed – inside the pods where the homeless can self-isolate
Next Post: Housing makes a difference in homeless arrest rate: How we analyzed the data