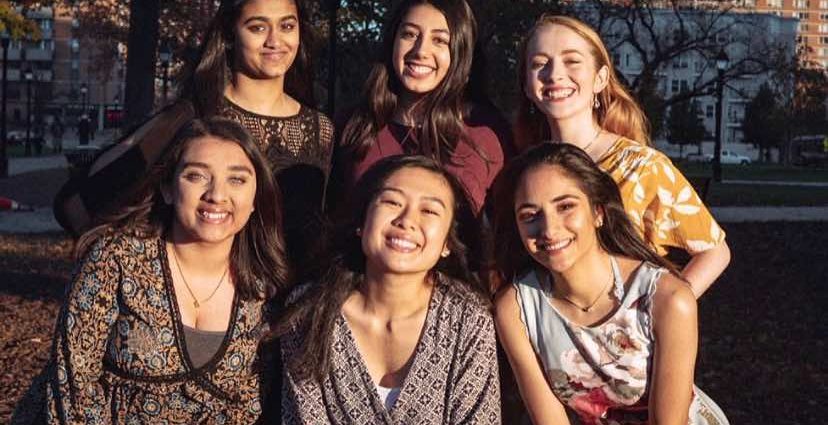 This story contains information about human trafficking and may be unsettling to some readers. If you or someone you know is affected, call the National Human Trafficking Hotline at 1-888-373-7888.

Most students bundle up in chunky sweaters, fleece-lined pants and snow boots to trek across campus during the winter. But in December, six VCU students insist on only wearing dresses.

“I get questions like, ‘Sammy, it’s like, four degrees outside, why are you wearing a dress again?’” said biology major Samara Shabon.

Dressember at VCU uses attire to educate people about human trafficking, or the forceful trade of individuals for labor or sexual exploitation. Shabon said her peers have been supportive, and some have donated to the cause.

“It sparks conversation,” said Shabon, president of the VCU chapter. “Then, people get awareness about what human trafficking is.”

The group uses donations to support human trafficking preventive programs, efforts to identify and free people who have been trafficked and comprehensive care for survivors.

Dressember was founded in 2009 by CEO Blythe Hill. Since then, thousands of people have participated in the style challenge, raising more than $10 million for human trafficking survivors.

When Shabon came to VCU in the fall of 2019, she said making a Dressember chapter at VCU was a priority. Shabon got involved with Dressember’s national organization in high school and wanted to continue social justice advocacy through a student group.

“The first thing that I did was I looked around for an anti-human trafficking organization,” Shabon said. “There’s like two, but they weren’t very active.”

The sophomore reached out to students at Honors College events, sharing facts about human trafficking in Richmond to gauge interest in starting a VCU chapter of Dressember.

Shabon said starting the chapter was easy. She signed up to be an advocate on the organization’s website and expressed interest in making a school-affiliated team.

“We, as VCU students who live in Richmond, think of it as like this cool, urban city,” Shabon said. “And we’re so privileged to think that because Richmond is like one of the worst cities in Virginia for human trafficking.”

Richmond is favorable to human traffickers because interstates 64, 95 and 295 all intersect in the area, according to the Richmond Justice Initiative.

“People don’t really know how prevalent human trafficking is,” Shabon said. “They don’t know that it exists in their own country — in their own backyard.”

“I didn’t understand its prevalence,” Mulpuru said. “I felt obligated to take part in it and make a difference in any way that I can because the world is a messed up place.”

Mulpuru now serves as communications liaison for Dressember at VCU. She informs professors and students about the realities of human trafficking and encourages them to get involved in the club.

The sophomore said raising awareness in-person has been difficult during COVID-19. This year, the group plans to wear dresses every day at home and document their journeys on social media.

Bioinformatics major Mallika Datta, who served as Dressember’s treasurer in 2019, said the pandemic motivated her to expand her role in the organization.

“Due to the ongoing pandemic and everything, I just felt like I wasn’t doing anything,” Datta said. “I wasn’t giving back to the community in the way I should.”

In her sophomore year, Datta is now the vice president of advocacy, creating posters on campus and brainstorming other creative methods to educate the public.

Datta said other students’ curiosity and donations mean a lot to her, and the group hopes to help survivors around the world.

“Even though it’s such a miniscule part, I feel like I’m a part of something bigger and something that’s really important,” Datta said.