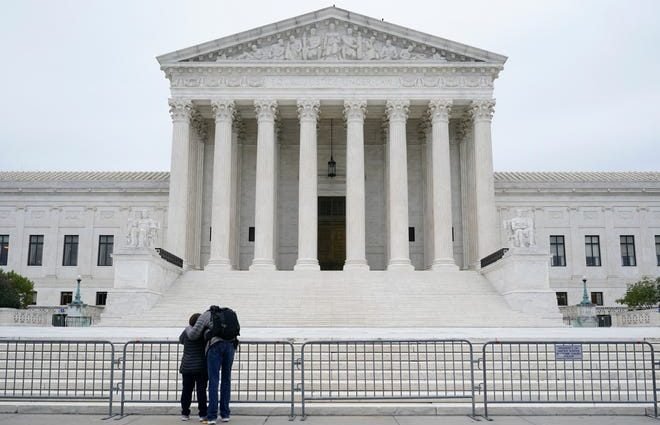 WASHINGTON – The Supreme Court has been very, very good for the cause of religious freedom in recent years. This summer alone, it sided with religious students, parents and employers in a trifecta of major rulings.

The high court has been kind to the cause of LGBTQ rights as well, granting same-sex marriage rights in 2015 and protection against employment discrimination this past June.

On Wednesday, both of those winning streaks will be on the line. Hours after the polls close on Election Day and with a new justice on the bench, the court will be confronted by a case in which one side has to lose.

At issue is the city of Philadelphia’s decision to stop referring children in need of foster care to Catholic Social Services, for decades one of its most reliable contract agencies, after discovering that it would not place kids with same-sex couples.

The dispute pits the Constitution’s guarantee of religious freedom against government bans on discrimination. When the court faced a similar case in 2018 involving a Colorado baker who refused to create a wedding cake for a same-sex couple, it issued a minor ruling that failed to resolve the question.

This time, the addition of Associate Justice Amy Coney Barrett gives the court’s conservatives a 6-3 majority, putting at risk a 30-year-old Supreme Court precedent that made it difficult for religious groups to avoid neutral laws that apply to everyone. Several justices are eager to overturn the precedent – written, ironically, in 1990 by conservative Associate Justice Antonin Scalia.

In recent years, the court has carved out protections for religious groups and individuals. It ruled that a Missouri church could receive federal funds, private corporations could avoid federal health care regulations regarding contraceptives, and a New York town board could open meetings with Christian prayers.

The court refused to let employers discriminate against LGBTQ workers in a 6-3 ruling in June, but even then Associate Justice Neil Gorsuch reiterated the justices’ respect for religious liberty.

“We are also deeply concerned with preserving the promise of the free exercise of religion enshrined in our Constitution,” he wrote. “That guarantee lies at the heart of our pluralistic society.”

The Archdiocese of Philadelphia has been serving abused, neglected and orphaned children for more than 200 years. But in 2018, the city learned from a local newspaper article that Catholic Social Services’ policy did not allow placements with same-sex couples, so it blocked the agency from making new placements on anti-discrimination grounds.

The foster care agency sued, but two lower federal courts refused to block the city’s action. The U.S. Court of Appeals for the 3rd Circuit ruled unanimously that the agency “failed to make a persuasive showing that the city targeted it for its religious beliefs or is motivated by ill will against its religion, rather than sincere opposition to discrimination on the basis of sexual orientation.”

“The city stands on firm ground in requiring its contractors to abide by its non-discrimination policies when administering public services,” the court said.

In asking the Supreme Court to reverse that decision, Catholic Social Services argued that under the city’s policy, the archdiocese would have to violate its sincerely held beliefs.

“Philadelphia demands that a religious agency, an arm of a church, speak and act according to Philadelphia’s beliefs,” said Mark Rienzi, president of the Becket Fund for Religious Liberty, which is representing Catholic Social Services in court. “If it does not, Philadelphia will rid itself of the meddlesome agency. The Free Exercise Clause was made for cases like this one.”

Sharonell Fulton, for whom the case is named, has worked with Catholic Social Services in Philadelphia to foster 40 children over 26 years. In a video posted on Becket’s website, she said her goal is to “show them some love, be there when they need you.”

“This is what I want to do, and I wouldn’t be able to do it without Catholic Social Services,” she said.

The Trump administration also is opposing the city policy, but it does not argue that the court should overrule its precedent. As was the case with the Colorado baker, the Justice Department says the court can rule more narrowly for Catholic Social Services, perhaps based on city officials’ hostility.

‘Stand up for these kids’

Philadelphia told the court it is eager to have the agency back as a full partner in recruiting and certifying foster homes, but only if it abides by “the same nondiscrimination requirement as every other agency.” In the meantime, the agency can continue to manage group homes and provide other social services to foster children.

“The Constitution does not grant CSS the right to dictate the terms on which it carries out the government’s work,” wrote Neal Katyal, a former U.S. acting solicitor general representing the city.

The American Civil Liberties Union, which is representing a legal services agency and an LGBTQ family advocacy group in the case, says a religious exemption for foster care could endanger other programs, from after-school care to food banks and homeless shelters.

Advocates for foster children also note that a large number of children needing foster care are gay, lesbian, bisexual or transgender, making it illogical to exclude LGBTQ couples from the program.

“Religious beliefs should not come before the needs of children,” said Stephanie Haynes, executive director of Philadelphia Family Pride.

The issue has arisen elsewhere. In Greenville, S.C., Brandy Welch and Eden Rogers sought to foster children through Miracle Hill Ministries, the state’s largest provider of homeless services. As a same-sex married couple, they were rejected.

Now they are among people on both sides of the emotionally charged issue whose stories are told in scores of friend-of-the-court briefs to the Supreme Court.

“I couldn’t just take a ‘no,’ because it wasn’t just a no to me or my wife, it was a no to hundreds of children,” Rogers said. “I felt an overwhelming need to just stand up for these kids.”

Welch, who grew up in a conservative, Christian home, said the foster care system also needs families in which gay, lesbian or transgender children would be welcome.

“I can only imagine how many kids are LGBTQ in the system that end up in Christian homes where they may not be able to be themselves.” she said.

Republicans lauded her devout Catholicism and personal opposition to abortion, which she said would not influence her legal opinions. Democrats claimed her association with groups that fight for religious exemptions from anti-discrimination laws represents a risk for gay rights.

The phrase “sexual preference” got her in hot water with the LGBTQ community, because scientific research has shown sexual orientation is not a choice. In response, she said, “I certainly didn’t mean, and would never mean, to use a term that would cause any offense in the LGBTQ community.”

While the Supreme Court has issued landmark rulings against discrimination and in support of LGBTQ rights in recent years, several conservative justices have voiced concern that religious freedom was trampled in the process.

Four of the court’s conservatives – Samuel Alito, Clarence Thomas, Gorsuch and Brett Kavanaugh – wrote in 2019 that the Employment Division v. Smith opinion from 1990 “drastically cut back on the protection provided by the Free Exercise Clause.”

And just last month, Thomas and Alito wrote that as a result of the 2015 same-sex marriage decision in Obergefell v. Hodges, “those with sincerely held religious beliefs concerning marriage will find it increasingly difficult to participate in society without running afoul of Obergefell and its effect on other antidiscrimination laws.”

Erwin Chemerinsky, dean of the University of California-Berkeley School of Law, said Barrett’s replacement of liberal Associate Justice Ruth Bader Ginsburg increases the chance that the court eventually will overrule its 1990 precedent. That could lead to broad religious exemptions from anti-discrimination laws, he said, making the foster case one with “enormous implications for people’s lives.”