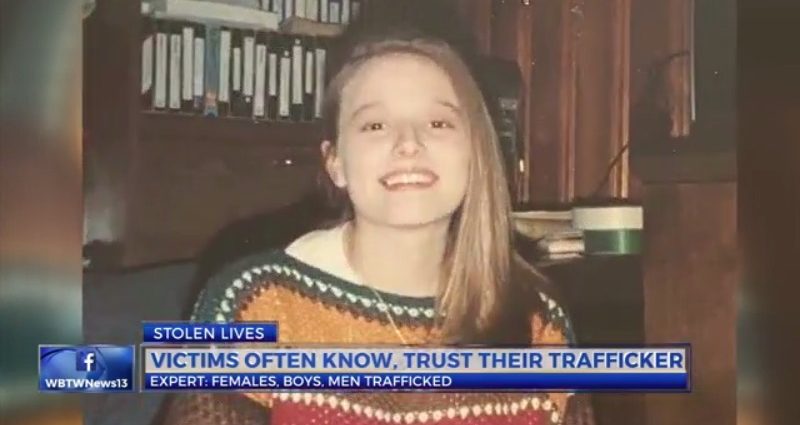 MYRTLE BEACH, SC (WBTW)- Two human trafficking survivors shared their stories with News13 about how trafficking can happen, the people they trusted, and why.

Kat Wehunt’s trafficker was a relative who started sexually abusing her as far back as she can remember. “At 14, this older relative sold me for the first time,” said Wehunt, a survivor. “He took me to this house and, sold me to three men that he owed something to.”

“From 14 to 17, I was sold to pastors, doctors, lawyers, and police officers and people you think would never buy sex from a child, were purchasing me,” Wehunt said.

Victims often know and trust their traffickers. According to the Polaris Project, the group that runs the national hotline, the family is the second most common recruitment tactic.

Wehunt now runs the only survivor led service provider in the state, called the Formation Project in Charleston.

“During the whole time, I was getting doctor’s appointments and I was sitting in school and I was going to the grocery store, standing, like, behind normal people and nobody knew. Nobody had any idea that I was being trafficked,” said Wehunt.

“We primarily see females, although boys and men are trafficked as well,” said Moorehead.

Traffickers seek out those who have been victims of other kinds of abuse in the past, runaways, or those facing unstable home lives. Which is what Heather Pounds’ life was like. Polaris reports the average age is 17, but Heather met her trafficker at age 14.

“Who said he loved me, who said no bad things would ever happen to me again, that he was going to take care of me. It was like he was coming in as my knight in shining armor and all the bad things were going to disappear, and I believed everything he said,” said Heather, another survivor, author, and coordinator with Lighthouse for Life.

A year later, she was hooked on drugs. According to Polaris, the No. 1 way victims are trafficked is by an intimate partner, and the No. 1 way traffickers control them is exploiting substance abuse.

“I had to work the streets. Back then it was called street walking. You would walk until he made enough money, to come in for the night and this is what took place in my life, for the next 18 years,” said Pounds.

Pounds was trafficking in some of the top counties in the state for human trafficking, including the No. 1 county – Horry.

“Myrtle beach was one of those areas, that we spent a lot of time in Myrtle Beach. It’s probably one of the places that I hate to go back to the most, because there was a lot of abuse that took place,” said Pounds.

Heather is now 44 years old and living in Columbia, but for nearly two decades she felt trapped in that life. At the time, she was a high school dropout, with a drug addiction, and a criminal record and didn’t see a way out.

“It was walking around with just, you’re a prostitute, you’re trouble, you’re rebellious, you’re, no good. You’re a criminal, you’re a thief, you’re a liar,” said Pounds.

When it all changed for Heather

One night in Charleston in August of 2008, that all changed. Heather was set to fly to New York to be sold. While driving home the night before her flight, she got pulled over on purpose. She learned the only way to get away from her trafficker was to sit behind bars.

“I remember when I was sitting in Charleston County jail, I truly believe that Jesus rescued me that night,” said Pounds.

Heather served two years in prison and with the help of the South Carolina Attorney General’s Office, has gotten many charges expunged and is waiting to be pardoned.

She believes there needs to be more education to identify victims, and more education can help victims identify themselves. Neither Heather nor Kat knew they were a victim until they were involved in advocacy work.

“I would say 90 percent of the women that I serve, and the people that I serve, don’t know either. I’m telling them for the first time,” said Wehunt.

“If you think about a young person in particular, who is searching for support or love from someone and somebody is extending that to them, they think that they’re providing for them. They don’t feel that they in turn are being victimized. They just feel like they’re reciprocating,” said Moorehead.

Kat and Heather continue on their own path to healing and helping others with theirs.

“There’s nothing like getting to walk with somebody, like in their healing journey, and see them conquer their goals and learn to love themselves,” said Wehunt.

“The past 10 years have just been a journey of healing and restoration and rebuilding and reshaping everything in my life,” said Pounds.