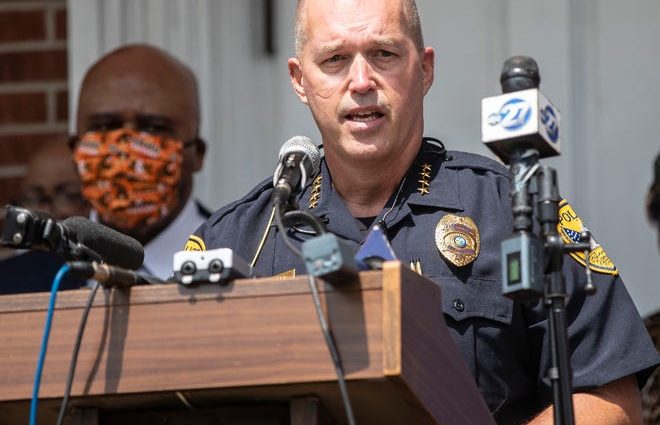 After the arrests of dozens of people on charges involving the sexual exploitation of a young girl, the Tallahassee Police Department appears poised to unveil results of a highly secretive investigation into human trafficking.

Police officials would not immediately confirm that the news conference is related to the Tallahassee Democrat’s reporting of arrests of numerous people, including a write-in candidate and a P.E. teacher, on charges involving the victimization of the girl.

“The Tallahassee Police Department recently concluded a year’s long investigation involving human trafficking,” the department said in a news release. “The results of this extensive effort will be announced at a press event.”

►Ten people, including a candidate, arrested in Tallahassee on variety of child sex crimes

The Democrat has tracked the arrests of more than 80 people since mid-July on similar charges, including lewd and lascivious behavior and using a communications device in the furtherance of a crime.

TPD never publicly acknowledged the investigation. Many of the defendants did not appear in daily booking reports, and their mug shots were scrubbed from online court records.

The vast majority of the cases appear tied to a girl who was 13 and 14 at the time the alleged offenses occurred. The girl was described as homeless for a time, though police reports also mentioned she lived with her mother in a filthy apartment.

Some of the defendants alleged that the girl’s mom was involved in arranging meetings with men referred to in police reports as “Johns.” Several of the defendants also were charged with human trafficking for helping to arrange “plays” or paid sexual encounters with the girl in apartments, hotel rooms and cars, according to reports.

The defendants communicated with the girl through social media, including Facebook, and text apps. She also was advertised on websites known for sex-for-pay listings.

Revell did not confirm whether the news conference is related to the recent spate of arrests. In an interview in late August, he said he couldn’t discuss the investigation because it could put victims in jeopardy.

Revell noted that he served in the Special Victims Unit for five years and touted the creation of TPD’s Internet Crimes Against Children Unit.

“We have some tremendous investigators that are doing tremendous work,” Revell said. “And it is vitally important for the safety of this community for us to be very active in (human trafficking), and we are making tremendous headway.”

2020-11-16
Previous Post: Homeless man had a nervous breakdown after his wife and daughter died.
Next Post: Has a stranger tried to contact your child online? Probably. What you need to know to keep your kids safe