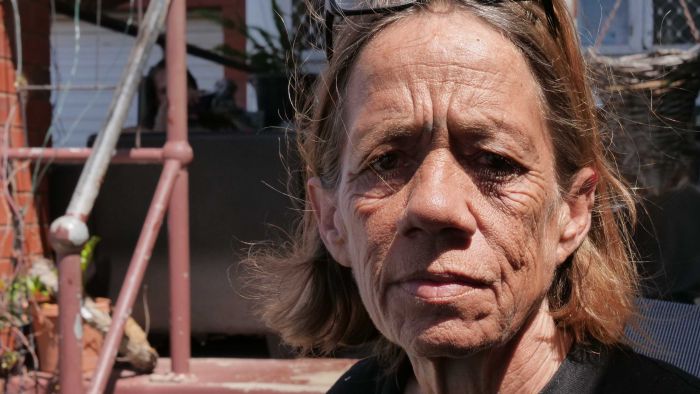 Sheryl Brockman has terminal lung cancer and her biggest fear is dying on the streets, waiting for the Housing Authority to find her a home where she can spend her final days.

The Geraldton woman has been living with cancer since 2012, but last year, while she was living in a friends shed, she got so sick she had to go to hospital.

Ms Brockman had to have half her lung removed and found out she had stage four cancer in her other lung and that it had spread to her stomach.

Not only is she terminally ill, Ms Brockman is also homeless and is currently staying with her friend in an overcrowded, three-bedroom house with nine other people.

“I’ve pushed a kid out of their bed, I sleep in a room with two little kids,” she said.

“But I don’t want them to wake up and find me dead in their bed, it would not be right.”

Despite her GP’s help applying for public housing, she has been on the priority waitlist for more than 12 months.

“I would like a house so I can have my family around me in my last bit of time,” she said.

“A two-bedroom would do, one for me and one for my carer.

“Just anything, I’m not fussy at all as long as it has got a roof I am happy.”

In a statement, Community Services deputy general director Rachael Green said there are currently 53 social housing properties that are boarded up and vacant, awaiting maintenance in the City of Greater Geraldton.

As of September 30, there were 712 people on the waitlist where their preferred region was listed as Geraldton.

“The State Government is committed to an appropriate level of social and affordable housing across Western Australia,” she said.

“To ensure people have access to well-located accommodation close to public transport, services and other amenities.”

Ms Brockman’s sister, Coral Brockman, said people like her sister do not have time to wait.

“There are so many boarded-up houses around this place why can’t they house these people?” she said.

“We’re not asking for a brand new place, we don’t want a mansion on the hill, just somewhere with a roof over their head, four walls and somewhere to lay down and rest.”

Coral said because the issue is not as visible in Geraldton, people without a permanent address go forgotten.

“I cry for her, I cry for all the people on the streets that I know don’t have anywhere to go,” she said.

“That is just so cruel.

“This is Australia, they call it the lucky country, that all depends who you are.”

Geraldton manager Chris Gabelish said there are so many more people in the same situation as Ms Brockman.

“It is not unusual for people on the priority list to be waiting for 12 months and up to two years,” he said.

“The thing about the priority list is these are people with much greater housing needs than the average person that actually needs to get into public housing.

“They have serious medical conditions, mental health conditions, history of trauma and they really need the assistance now.”