The Fight Against Child Trafficking 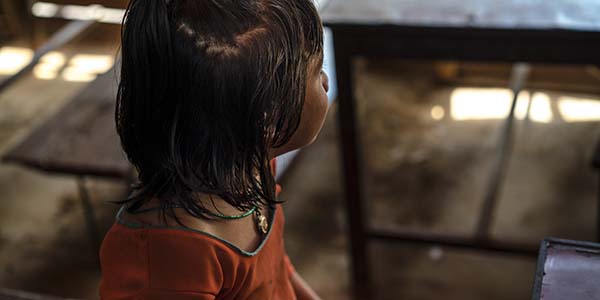 Child trafficking is a crime – and represents the tragic end of childhood. It refers to the exploitation of girls and boys, primarily for forced labor and sexual exploitation. Children account for 27% of all the human trafficking victims worldwide, and two out of every three child victims are girls[i].

Sometimes sold by a family member or an acquaintance, sometimes lured by false promises of education and a “better” life — the reality is that these trafficked and exploited children are held in slave-like conditions without enough food, shelter or clothing, and are often severely abused and cut off from all contact with their families.

Children are often trafficked for commercial sexual exploitation or for labor, such as domestic servitude, agricultural work, factory work and mining, or they’re forced to fight in conflicts. The most vulnerable children, particularly refugees and migrants, are often preyed upon and their hopes for an education, a better job or a better life in a new country.[ii]

Every country in the world is affected by human trafficking, and as a result, children are forced to drop out of school, risk their lives and are deprived of what every child deserves – a future.

How Girls Are Affected By Trafficking

Tragically, both girls and boys are vulnerable to being trafficked. However, girls are disproportionally targeted and must deal with the life-long effects of gender inequality and gender-based violence.

Often, girls around the world are forced to drop out of school or denied access to income-generating opportunities. This resulting social exclusion can trap girls in a cycle of extreme poverty, as well as increased vulnerability to trafficking and exploitation.

Because child trafficking is often linked with lucrative criminal activity and corruption, it is hard to estimate how many children suffer, but trafficking and exploitation is an increasing risk as more children around the world live in conflict.

As of 2017 420 million children are living in “conflict zones” – up 30 million from 2016. Living amidst conflict increases children’s exposure to grave human rights violations, which include child trafficking and gender-based violence.

Our Work in Daulatdia

One of the largest brothels in the world, Daulatdia in Bangladesh is a community built upon sex work. Thanks to our supporters, Save the Children has been working in the village since 1997, supporting mothers and children with the aim of lifting children out of poverty and toward a better future – breaking the cycle of poverty and sexual exploitation.

Tragically, many of the sex workers in the town are girls under age 18, some as young as 10. Many are trafficked into the town, while others are forced into the sex trade. These girls are extremely vulnerable, living their lives exposed to serious risks, including physical, sexual and psychological violence.

Some sex workers in Daulatdia become pregnant and have children of their own. Save the Children experts offer counseling to these young mothers on child development and how to care for their children, focusing on early learning so that babies and children are nurtured, build strong relationships, and develop physically and mentally. We also provide pre-school and primary education, so children can remain in school.

One of the most critical aspects of our work in Daulatdia is providing children, especially girls, with safe spaces. These are areas where children can safely read, rest and play, do homework and benefit from coaching for their studies – places where they can simply be children again.

We’re helping educate and rehabilitate girls  – either at home or in alternative care – providing a safe alternative to life as a sex worker and breaking the cycle of violence and exploitation.

Shuma,* is the daughter and granddaughter of former sex workers from the Daulatdia brothel in Bangladesh – another girl seemingly stuck in the cycle of poverty and violence. But studying at a Save the Children-supported school for children from the brothel has empowered Shuma to dream big – she wants to stay in school and study to be an English teacher when she grows up. *Name changed to protect privacy.

“Girls should be able to study and fulfill their dreams,” says Shuma. “They should decide for themselves what they want to be. If I study I will do well in life.”

Involving local governments to improve services for children and their families is another crucial part of our work in Daulatdia. With increasing community support, we are able to provide more and more marginalized children with the opportunities every child deserves.

What is child trafficking?

Trafficking, according to the United Nations, involves three main elements[iv]:

How does trafficking differ from smuggling?

Trafficking and smuggling are terms that are commonly mixed up or considered synonymous. They both involved transporting another individual, but there are some critical differences.

H4: Smuggling involves the illegal entry of a person into a state where he or she is not a resident.

There are three key differences between trafficking and smuggling[iv]:

How many children are victim to child trafficking?

An estimated 1.2 million children are affected by trafficking at any given time[iiv]. Around the world, most children who are victims of trafficking involved in forced labor.
Worldwide:

How is Save the Children helping victims of child trafficking?

Save the Children works to combat child trafficking through prevention, protection, and prosecution. In order to maximize our efforts, we work with communities, local organizations and civil society, and national governments to protect children from being exploited – and to help restore the dignity of children who have survived.

Save the Children takes a holistic approach to tackle the root causes of trafficking and involves children in the design and implementation of solutions.

Working alongside communities and local and national governments Save the Children supports:

By supporting livelihoods, we help families avoid the need for their children to work. By raising awareness of trafficking, we reduce the number of children being trafficked. By helping rehabilitate survivors, we empower them to rebuild their lives. By protecting unaccompanied refugee children, we keep them from the clutches of traffickers.

We Launch Advocacy Campaigns
With all the excitement that led up to the South Africa World Cup 2010, it is easy to forget that such a major sporting event can lead to child trafficking and unsafe child migration. To help protect children during this time, and raise community awareness of the dangers, Save the Children in Mozambique launched an advocacy campaign called “Open Your Eyes” with radio and television programs, interviews, posters and postcards that reached 250,000 people

The former national team captain, Tico-Tico, even volunteered his own time to appear in several advertisements highlighting the problem of child trafficking. Even after the World Cup was over, this advocacy worked to help protect vulnerable children from exploitation

We Support Public Policy and Training
One reason trafficking and exploitation of children flourish is because of inadequate laws and policies against it. In El Salvador, Save the Children focused on Mejicanos, one of the most frequent areas for trafficking of children, and supported the municipal council in drafting the first-ever ordinance to prevent child trafficking, and monitor its implementation.

Save the Children also conducts awareness training in schools, so children can learn how to keep safe, as well as how and where to report any suspicious activity. Now the majority of Mejicanos are working with Save the Children to share this experience and replicate its success throughout El Salvador.

We Use Research in Creative Ways to Protect Children
“Positive deviance” – an innovative approach pioneered by Save the Children and well-documented in improving children’s health and nutrition, is also being used to fight child trafficking. Save the Children used this approach in two child protection programs — one to prevent trafficking in girls for commercial sex work in Indonesia, and the other to reintegrate girls who were abducted by the Lord’s Resistance Army (LRA) and girl mothers into their communities in Uganda.

Does child trafficking happen in the United States?

In the U.S., 60% of child sex trafficking victims have a history in the child welfare system[iv]. Foster children in particular are vulnerable to being victimized by child trafficking[iiv]. Children in the foster care system often live in of the poorest communities in America, where Save the Children works to break the cycle of poverty and ensure that every child gets a healthy start, a quality education, and is protected.

When is World Trafficking Day?

In 2013, the United Nations passed a resolution designating July 30 as World Day Against Trafficking in Persons to raise awareness about the growing issue of human trafficking and the protection of victims and their rights.

Who can I contact if I witness or suspect child trafficking?

2020-12-05
Previous Post: From 16 in a homeless shelter to a UK social work degree
Next Post: Cry by Hungry ! Janna cry ask to food from us by hungry because mom stop give milk to her