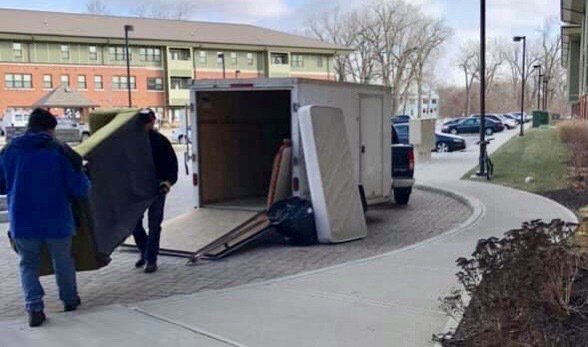 INDIANAPOLIS — Thieves target a local non-profit whose mission is to help those struggling on Indy’s streets.

PourHouse is an outreach program that connects homeless people with shelter. Over the weekend, someone stole one of PourHouse’s trailers.

“All I can say is, it’s just sad. I wish we could find it,” said Laura Buckner, Operations Manager with PourHouse.

The trailer was packed with things like dressers, beds, and kitchen items.  Everything was donated, and it was all being given to people who were finally getting off the street and moving into a home.

“This is one of the most vulnerable parts of our community that we are trying to help. To be preyed on like that, and in a church parking lot, it’s just sad,” said Buckner.

The trailer was parked at Soma Church off 62nd and Keystone.  Bucker tells FOX 59, they have used the parking lot for a couple of years and never had a problem until this.

“I don’t know what position these people were in that they felt they need to do this but I promise you the trailer was meant for people who are way worse off than you are,” said Buckner.

The only thing left behind was the broken lock.

Volunteers realized the trailer was stolen on Saturday morning. Hours later they were supposed to help people move. Volunteers had to scramble to find other donated furnishings.

“When they do come forward for the help, we want to be there to have the items to get them moved in,” said Buckner.

Community members and a local business stepped up to help a bit. Buckner is grateful but she also wants these thieves to know what they did was wrong.  To the thieves, the trailer may have seemed like quick cash, but to others what was inside was a new start on a better life.

“We just want it back. Please bring it back. Put it back where you found it and we’ll be happy and move on,” said Buckner.

A police report has been filed with IMPD.  If you know anything that can help detectives, call 317-262-TIPS.

Also, PourHouse volunteers are asking businesses and homeowners around 62nd and Keystone to check their surveillance cameras.

2020-12-15
Previous Post: Covid is having a devastating impact on children — and the vaccine won’t fix everything
Next Post: Men who pay for sex fuel ‘brutal sex trafficking trade’, senior MP says as she proposes law to bust the business