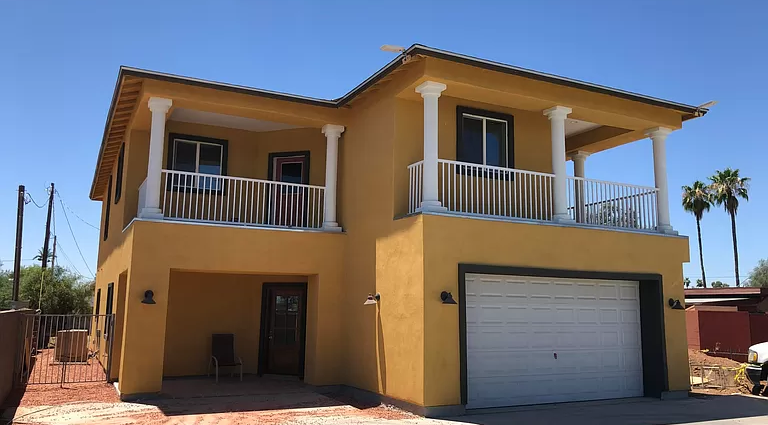 Two Phoenix nonprofits are working to provide stable transitional housing for youth aging out of the foster care system in Arizona.

A total of 83% of Arizona’s aged out foster youth (18-21 years old) struggle to find stable housing, according to a 2018 study by the Annie E. Casey Foundation.

Hope House opened in October and consists of three houses on the intersection of 21st and Missouri avenues.  It has 12 residents who aged out of foster care, said David Hall, the transitional youth outreach program coordinator for Onward Hope.

“Nine of them (new members of the community) were homeless and three of them were on the verge of homelessness,” said Hall.

Hope House does more than provide a roof over their heads, Hall said, but also transitional services such as employment assistance, transition counseling, help applying for food programs.

Thrive Arizona had plans earlier in 2020 to create a “Tiny Homes” program for former foster youth, said Thrive Arizona co-founder Teri Vogel. It would have placed youth in 240 square feet homes of their own. But the program was put on hold due to COVID-19.

“We have five transitional homes right now up on N. 22nd Street and we were running out of space,” Vogel said. “Transitional housing is what the young adults wanted. They were tired of sharing a room, tired of sharing space, and in order to teach them really how to be self-sufficient, how to do their own laundry, how to make their own meals, Tiny Homes, having a space of their own, would be the best situation.”

Thrive Arizona originally started in 2016 as a prevention and family reunification service, Vogel said. Since Thrive Arizona started providing transitional living services in 2017, it has served 25 youth who have aged out of foster care, Vogel said.

With Hope House being a month old, challenges will be handled as they arrive, Hall said.

Staff are “working through the different personalities of all of these different people that are coming in homeless, off the streets, from foster care,” Hall said. “So yes, there are adults and they’re 18, 19, 20, but they’re still human.”

One of the biggest takeaways of transitional living is learning adulthood skills from staff members of the nonprofit, said Noah Hart, 21 a former foster youth and resident of Thrive Arizona.

They taught him how to be an adult, Hart said. “They taught me (about) schooling, scholarships, bank accounts, and saving accounts. I’m getting a job, keeping a job, even when it comes to housing. I always paid rent right on time.”

Since moving out of Thrive Arizona, Hart lives in a townhouse with his girlfriend, works two jobs, and is finishing his final semester of community college before transferring to the W.P. Carey School of Business at Arizona State University to earn his accounting degree.

He wouldn’t be there without Thrive’s help, he said. It’s not easy for these young people to accept help, said Thrive co-founder Steve Vogel, who is Teri’s husband.

“One of the challenges is getting them to trust us,” Vogel said. “Because they don’t trust people. People have made them promises and then people let them down, and they more than likely did not have a family structure around them in the past. So it’s breaking down those walls where they see that we really are in it just because we care about them.”

There are also financial challenges that come with transitional living programs.

“We (Hope House) are fundraising for the program because the cost to start an organization is very high. We are not a DCS (Arizona Department of Child Safety) contracted program. We’re doing this without (government) funding,” Hall said.

Transitional housing programs are needed now more than ever for former foster youth, according to Hall and Vogel.

“They’re struggling,” Hall said. “They don’t really have anywhere else to go. They end up going down a path that becomes more and more challenging, and often unhealthy, and the supports are not there and then it just becomes a cycle.”

Teri Vogel agrees: “They’ve gone through the system. That’s where the trauma starts.  When they have to be removed, the trauma begins and then they age out, and then because of the trauma they may be 18 but mentally and emotionally they are a 14-year-old child because they haven’t been raised in a two-parent home.”

The nonprofit leaders say their work is aimed at preventing young people from just becoming a statistic. Without help, many foster kids get into trouble with the law.

The Vogels and Hall say they are providing these young people a helping hand and an avenue to success as adults.

2020-11-08
Previous Post: Homeless Woman Walks Us Through a Day in the Life on the Streets of San Diego
Next Post: Mother and son raise money to help the homeless in Sussex County