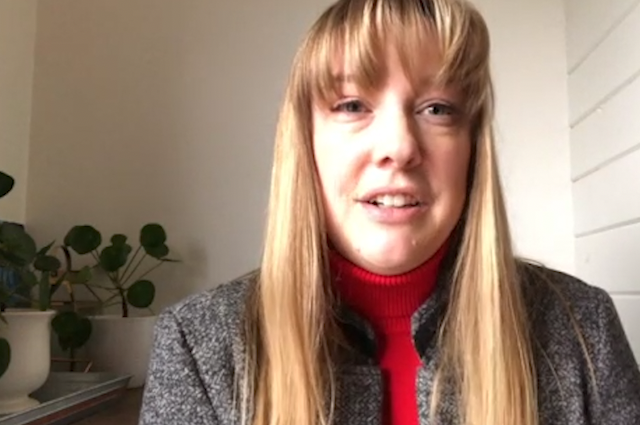 BEND, Ore. (KTVZ) — A story of triumph is told as Cheryl Csiky, who was trafficked as a child, is chosen to lead a national group’s fight against human trafficking as executive director of Bend-based In Our Backyard.

The announcement was made Tuesday by the national organization that fights to end child sex trafficking.

Csiky said that in her case, she was caught off-guard by what happened to her as a young girl.

“It doesn’t have to always be kidnapped or forced,” she said Tuesday. “There’s a lot of grooming involved. I trusted the person who ended up exploiting me.”

At 10 years of age, Cheryl was groomed by a peer into doing what were described as “dates” for his profit in her suburban middle-class neighborhood.

She said she initially went to him for help with other sexual abuse trauma she was going through.

“I was looking for love,” Csiky said. “I was young, a 10-year-old girl, knowing that I wanted to escape child sexual abuse that was happening to me. And I confided in a friend, and what I didn’t know is that friend would exploit me.”

She still thinks about what happened to her as a child, some days more than others.

“Some days I have good days,” Csiky said. “Other days are a little more tough for me to remember who I am.”

It’s something she’s taking with her to the battleground against such a horrific issue.

“For me to be that little girl that overcame such a tough journey in my life, that’s what wakes me up in the morning, to say, ‘that has to stop for someone else,” she said.

Cisky said she wants to help the entire country recognize the signs of human trafficking, an issue that currently takes place here in Central Oregon, where the organization was founded.

In Our Backyard Founder and President Nita Belles said in rural areas like Bend, Redmond, Central Oregon, “it does kind of fly under the radar. People don’t realize that it happens here, we’re used to this safe environment. But it does happen here, and in fact recruiters are known to recruit in areas like Central Oregon.”