United Way steps up to coordinate community response to COVID 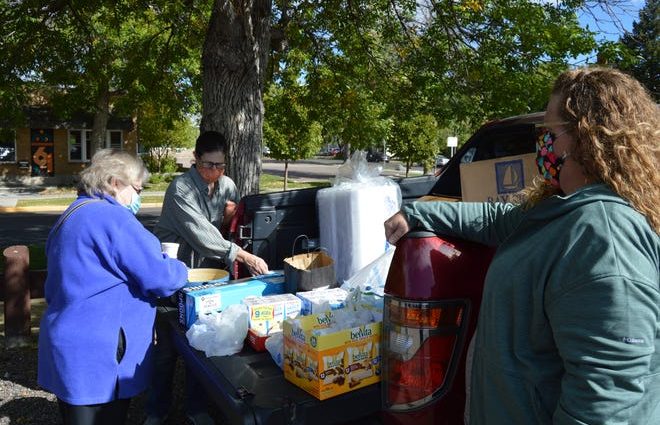 On a recent shiny Sunday morning, the warm smell of chicken corn chowder filled the air in the parking lot of First United Methodist Church in downtown Great Falls. Several homeless gentlemen smiled as they supped the tasty soup and snacked on fresh baked oatmeal raisin cookies while holding take-home bags filled with more food to help them get by.

Five mornings a week, St. Vincent de Paul’s Director of Homeless Services Carley Tuss loads up her food truck and heads downtown to serve some 20 to 30 residents, including Randy McCormick, who always shows up because he knows she and her helpers will be there.

“God bless their hearts,” said McCormick. “They do a lot of good things for a lot of people, and it’s awesome.”

These homeless residents usually receive food and other assistance at St. Vincent de Paul’s Drop-in Center. But, like many other organizations that provide services in Great Falls and the surrounding area, the center had to close when the COVID-19 pandemic hit in March.

Hundreds of other community members also were affected by the sudden shutdown. The demand on food pantries increased substantially. People who couldn’t work or lost jobs needed unemployment assistance and help paying bills. Essential workers who relied on public transportation had no way to get to work.

United Way of Cascade County responded immediately, following its mission to mobilize community resources to respond to human service needs in the community. Through the organization’s swiftness in reaching out to nonprofits, gathering and sharing information to uncover the greatest and most immediate needs, and then helping match needs with helpful resources, many prayers were answered.

“Like every other sector of the economy, human services and nonprofit organizations had never faced anything like this,” said United Way President Gary Owen. “But we know in most situations we can help each other and learn from each other. It’s helpful just knowing what the impacts are on services, what those direct services are hearing from clients and what demands they are seeing.”

“Many services had to close down or alter business practices or hours of operations or not allow volunteers,” he added. “There were so many twists and turns from the impact, so we tried to be a conduit for that.”

United Way used $10,000 from its reserve fund to create a COVID-19 Community Response and Recovery fund to support local organizations that were seeing an increased demand on their services. The initial goal was to raise $50,000.

“We knew resources would be critical and stretched,” Owen said. “We launched our Response and Recovery Fund fairly quickly, and the community quickly stepped up to help.”

One of the first distributions was to support Montana 2-1-1, a help resource center that played a critical part in identifying needs throughout the pandemic. People can call the crisis line 24 hours a day, 7 days a week or visit the website montana211.org.

“They do a really good job of keeping track of the types of services people need,” Owen said. “If they are calling because they can’t pay their rent or get enough food or need mental health resources, the center tracks the type of need and we use the data to determine how to use the funds in our response and recovery effort.”

Calls to Montana 2-1-1 skyrocketed in March as people were losing income, needing food supplies and transportation, and struggling with mental health issues. At the same time, the usual resources available to solve these problems were changing because of the pandemic.

“Services changed all the time, and they were letting me know,” said Jackie Gittins, director of Voices of Home, which manages the crisis line. “Places like Opportunities Inc. and the Rescue Mission had different rules. The doors weren’t open, but services were still available.”

Initially, a lot of calls were related to unemployment, Gittins said. Finances were tight and people couldn’t get food on the table or pay rent or utilities. Many had never needed to access welfare services before.

“As resources became available, we let them know what they needed to do,” she said.

As time went on, more calls were related to mental health. One day the center received more than 80 such calls.

Gittins said if you don’t take care of a 2-1-1 resource need, it’s going to turn into a crisis, possibly even a suicide attempt. They continued to share the information with United Way to let them know what needs they were seeing and what resources were needed to help.

“We brought together 13 providers plus concerned citizens like the mayor and city and county commissioners to talk about what services were available, were they meeting demands and was there a need for additional services,” said Owen. “Even some of the providers on that call learned of services they didn’t know were available.”

United Way was having these types of conversations with several local nonprofits to solve problems. Karla Seaman, executive director at Opportunities Inc., worked with United Way to find transportation when the Great Falls Transit board shut down bus and paratransit services.

“On a Tuesday afternoon we found out there would be no transit services the next day,” Seaman said. “We had to move fast.”

Seaman said many of her clients rely on public transportation to get to life-sustaining medical treatments, like dialysis and chemotherapy. She also has several individuals who work jobs in assisted living homes, hospitals and grocery stores, and they count on the bus to get there.

“They are frontline essential workers who qualify for services because they don’t make that much,” she said. “We wanted to take as much as we could off their plate, give them one less thing to worry about.”

Seaman called Ryan Perrin at BlackedOut 406, and he agreed to help provide taxi rides for these individuals while the bus service was shut down. Once Opportunities verified the passenger and they were in BlackedOut’s system, they could request rides as needed. BlackedOut would then bill Opportunities, and United Way would help subsidize the cost.

In the 11 weeks the bus service was down, BlackedOut provided 1,169 rides to 55 people, including Amy O’Connell, who works as a cook at Ivy At Great Falls, formerly Missouri River Manor.

“I have to be there,” said O’Connell. “Those residents are depending on me for their meals.”

O’Connell said she used BlackedOut for rides to and from her shifts five days a week. Her husband, Shawn, also used the taxi rides when he couldn’t get rides from his coworker at City Motor Company.

“What Opportunities, BlackedOut and United Way did for us was reach out with a helping hand,” said O’Connell. “During that time, I wouldn’t have had a way to pay for my cab rides. And there were no buses running even if I could get to the bus.”

She said having that expense covered was a blessing because, like so many others, they were dealing with financial burdens. She worried about paying bills and feeding her 12-year-old daughter, who she joked “eats like a bottomless pit.”

“I thank God and I thank them for getting us what we needed,” she said.

Along with getting the essential workers to their jobs, BlackedOut provided 158 rides for 47 people who use paratransit services. Shyla Patera, who works with disabled people through her job at Northcentral Independent Living Services, said her clients were grateful for the rides that were provided in the interim.

“Without BlackedOut, people who didn’t have other support or a car would not have had the opportunity to work,” she said. “And medical appointments and dialysis were very important, too.”

Seaman said it was a great community collaboration and that it has been heartwarming to see everyone pulling together to help during this difficult time.

“It’s just nice to know that as a nonprofit you have that support,” Seaman said. “I can give Gary a call and if he doesn’t know (what to do) he usually knows someone who does.”

Executive Director of St. Vincent de Paul Deb Kottel echoed that sentiment when talking about the increased need for food and issues faced by the homeless community when the pandemic hit.

“We are stronger together, so how does that together come? Well, that’s United Way,” said Kottel. “United Way puts together meetings where we can talk, share resources and put together a needs list.”

When the Drop-in Center had to close its doors and start seeing folks by appointment only, they had to come up with a way to continue meeting the needs of the homeless community.

“Places like restaurants where the homeless would normally go to the bathroom were often closed,” said Kottel. “With United Way and the help of the City, we were able to put some porta-potties in some locations. That’s just part of their dignity.”

Owen added they also secured donations for bottled water when they no longer had access to water.

United Way used some of its Recovery and Response Fund to support food pantries, which were seeing a monumental increase in demand.

She said more people were coming in from rural communities to get food, and there was an increase in elderly clients.

“My guess is the elderly may be helping their adult children, so they have less for themselves,” Kottel said. “Also, if kids were doing online learning at home, they weren’t getting breakfast and lunches at school. So it was an increased burden on families with very low incomes.”

The support from United Way also makes it possible for the St. Vincent de Paul food truck to continue even though the Drop-in Center has reopened. Homeless residents once again can get meals, take a shower and do laundry at the center, but it is by appointment only.

“It’s a basic service, but you can’t make a good decision if you’re hungry,” said Tuss. “If we address the more basic needs, then we can address other needs, like getting them their documents and looking into treatment options.”

Tuss said with the help of Alluvion, which also received funding from United Way, they were able to offer COVID-19 testing and flu vaccines to the homeless community. They handed out masks and hand sanitizers, too.

“I can’t tell you how generous this community is,” she said. “There are so many people and organizations who do what they can.”

Kottel said the community really stepped up to meet the needs people have been facing over the past several months.

“I think part of that is the role modeling that United Way does,” she said.

“United Way is able to be nimble and pivot accordingly in a situation like the pandemic,” he said. “I think Great Falls is an incredibly generous community. Part of maintaining that generosity is the dollars and resources that people donate are used quickly, efficiently and sustainably. United Way does that.”

United Way asks for money once a year. Money raised in United Way’s fall campaign supports 34 local nonprofit programs and United Way’s community impact work. Many people give through an employee campaign, which runs through the end of the year. People also may give by sending contributions directly to United Way at PO Box 1343, Great Falls, MT 59403 or donating online via their secure website at www.uwccmt.org.