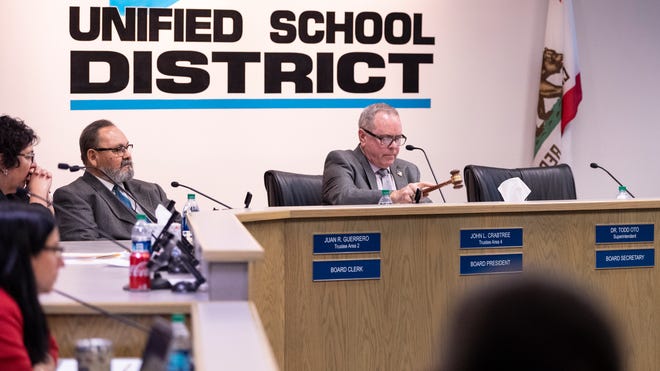 Whether to wear face masks or not became a polarizing issue this election year — and during a Visalia Unified Board of Trustees meeting on Tuesday night.

Board President John Crabtree devalued face masks before verbally lashing out at fellow board member Lucia Vázquez over a Visalia Times-Delta interview in which she expressed concern about board members prioritizing their political agenda over children.

Crabtree’s comments troubled many Visalia residents watching the virtual meeting from home, according to social media posts. Residents worried about the health implications of Crabtree’s statement while others questioned its veracity.

“There are hundreds of thousands of people who die from tuberculosis every year, and yet we don’t wear masks in order to prevent us from getting tuberculosis,” Crabtree claimed at the meeting. He then told a puzzled Vázquez his comments weren’t a “political decision.”

“The psychological damage that has been done to the kids,” he added, “to deal with that far outweighs the (COVID-19) threat we are seeing … with not getting them back to school.”

The numbers Crabtree shared are misleading.

About 542 Americans died from tuberculosis in 2018, according to the Centers for Disease Control and Prevention, which indicated this data was the most recent.

So far, more than 241,000 Americans have died of COVID-19-related complications since the start of the pandemic in March.

And while federal and state health officials recommend wearing face masks and voluntarily quarantining or isolating to prevent people from becoming sick or dying from COVID-19, historically health officers have been far stricter with those who have tuberculosis.

Health officers have the authority to detain and confine people with tuberculosis, according to the Centers for Disease Control and Prevention.

Confining people with tuberculous goes back to the early 19th century when states or private entities built medical facilities called sanatoriums to control the spread of the disease.

Sanatoriums were meant to cure those with tuberculous, but strange human experiments took place at some of these facilities, such as “cracking a patient’s ribs and placing ping-pong balls on the person’s chest to keep their lungs from fully inflating,” according to the Associated Press.

In contrast, state governments, including California’s, have issued executive orders that hotels and medical facilities be used to house mostly homeless COVID-19 patients, but this has been “hastily adapted,” and these facilities have “limited capacities,” according to the Atlantic.

By the numbers: COVID-19 vs. tuberculosis

Crabtree claimed “hundreds of thousands of people die from tuberculosis every year,” but those who live outside the United States are most vulnerable to the disease.

About 542 Americans died from tuberculosis in 2018, according to the Centers for Disease Control and Prevention.

Globally, about 1.8 million died from tuberculosis in 2015, according to the World Health Organization. This figure includes 0.4 million who had HIV.

Additionally, in this year alone, more than 241,000 people have died from COVID-19 in the United States — more than those who died from tuberculosis in 2018.

Worldwide, more than 1.28 million people have died from COVID-19.

There are still several weeks left of 2020.

Crabtree and Vázquez on attacks

Crabtree addressed Vázquez several times throughout the board meeting because of an interview she did with Times-Delta.

Those who commented on Facebook said they were shocked Crabtree personally attacked Vázquez — and kept doing so throughout the night — during a public forum.

“If he felt attacked, it wasn’t my intention,” Vázquez said of her previous interview. “It’s important to be truthful. Some don’t like it, but it’s what I have.”

During the meeting, Crabtree often told Vázquez he couldn’t hear her and called her “Ms. Vázquez,” who has publicly said she prefers to be called “Dr. Vázquez.” She has a doctorate in educational development and organizational leadership.

“When I was growing up, I didn’t see a Latina being called doctor,” she explained. “I would like to make that a norm. Kids need to know (earning a doctorate) is something they can do.”

Vázquez said she believes Crabtree’s comments stemmed from the tight Area 6 race between her and her challenger, Christopher Pope.

“(Crabtree) is worried about the election because it could go either way at this point,” she said. “Unfortunately, he has had the votes for a few things for quite a while.”

“Mr. Pope and I have differences of opinion,” she added. “Our race will determine where those votes are. People are concerned either way.”